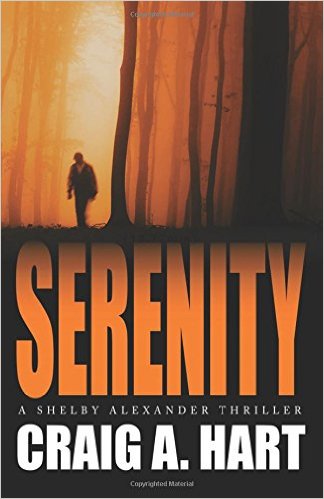 A bullet slams into a wall just past Shelby’s head. A drug dealer offers him $10,000 for information regarding his dead sister. The local sheriff has Shelby in his sights. It’s just another day in the small town of Serenity.

Set in Serenity, Michigan, the Shelby Alexander Thriller Series stars an aging ex-boxer and retired fixer whose activities flirt with the wrong side of the law. Shelby moved to Serenity, his boyhood hometown, looking for a slower pace of life. But trouble follows men like Shelby, and he finds himself embroiled in an underworld of drugs and violence that may prove to be his undoing.

This book would make an excellent movie. It is fast-paced, there’s a bit of sex, a bit of drinking, and lots of violence. Combine that with wonderfully developed characters and some witty dialogue, and it’s perfect for the big screen.

Not only do you get lots of action and a mystery, but there are real connections between the characters. Shelby who is in his 60’s, and has not had a good relationship with his daughter, has to deal with her now wanting him talk to his ex-wife of many years.

Plus Shelby has a new girlfriend who is actually his daughter’s age. While some might find that pathetic, or even creepy, I really enjoyed the relationship between Shelby and his girlfriend. I think she adds some spunk to the book, and definitely keeps Shelby feeling younger, and loved.

There is also a great male bond between Shelby and a former cop, Mack. Mack is the type of friend who you want to have your back, especially when you’re on the hunt for ruthless meth dealers. Mack is also that friend who will get always drunk with you, and you can talk to about anything. Everyone needs at least one friend like that.

A wonderful book all around, and I’m looking forward to the next one in the Shelby Alexander Thriller series.