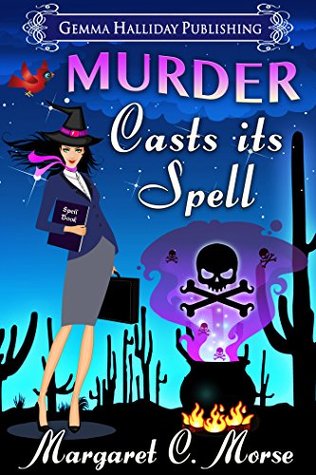 From debut author Margaret Morse comes a story of magically deadly proportions… Attorney Petra Rakowtiz lives in a world much like ours…except that her latest client is a wizard. In a society divided into those with magic and non-magic powers, Petra finds herself on the non-magical side of the equation, instead opting for a career making sure that all people—powerful or powerless—get the justice they deserve. Only her ideas of justice are tested when Petra’s first murder case falls into her lap after her lead investigator is arrested for killing his ex-girlfriend.

While Petra wants to believe he’s innocent, her client conveniently keeps “forgetting” to tell her anything that makes him look bad. Suspects begin to pile up, including one who would kill to keep his secret and one who tempts Petra to let her guard down and fall in love again. And the fact that the accused is a wizard sends the press on a hate campaign, claiming his powers are enough to make him a danger to society. Petra might agree that magic can be unpredictable…especially when she suddenly posses those powers herself for the first time. With the Wizard Council threatening to lock her up for her inability to control her new power, and her client’s life on the line if she doesn’t prove him innocent, Petra has to make the real murderer appear before she herself disappears.

I am sure they are out there, but this is the first legal paranormal mystery that I remember reading. As much as I enjoy all the paranormal cozy series I read, this was a nice change up. Not as involved with the courts as a John Grisham novel, but there are elements of it in the story. And if this series continues I would enjoy seeing a bit more of the courtroom drama.

There was a lot going on in this book, but Margaret Morse made it work very nicely. Not only was Petra dealing with trying to defend her client, but once she starts showing magical abilities and isn’t able to go into the courtroom (for fear that she can’t control her magic and would hurt someone), the way she has to investigate turns the story into a cozy mystery. It will be interesting to see if the next book in the series follows that same formula.

Morse’s characters were very well developed for being a debut novel, and I really enjoyed the magical twists she included. The type of familiar that Petra gets is done in a very unique way, and I can’t wait to read more about the workings of the place she had to go to while working on her powers. And I thought the whole inner demon actually being real, was a very cool concept.

A great beginning to a new genre, and I really, really hope it continues into a series.