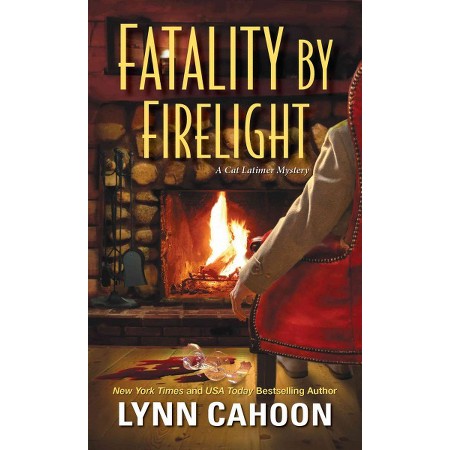 To kick off a winter writing retreat, Cat and her handyman boyfriend, Seth, escort the aspiring authors to a nearby ski resort, hoping some fresh cold air will wake up their creative muses. But instead of hitting the slopes, they hit the bar—and before long, a tipsy romance novelist named Christina is keeping herself warm with a local ski bum who might have neglected to tell her about his upcoming wedding.

Next thing Cat knows, her uncle, the town sheriff, informs her that the young man’s been found dead in a hot tub—and Christina shows up crying and covered in blood. Now, between a murder mystery, the theft of a rare Hemingway edition, and the arrival of a black-clad stranger in snowy Aspen Hills, Cat’s afraid everything’s going downhill . . .

This is the first book I’ve read in the Cat Latimer Mystery series, and really enjoyed it. The premise of turning a giant house into a writing retreat is really great for a cozy series. It is a perfect way to have new characters for each book, while still having consistent main characters.

Although this is the second book in the series, Lynn Cahoon gives enough backstory that you can easily catch up with the characters. And for being book two, the characters are already very well developed. Besides having a sweet romance with Seth, there is potential here for a romantic tension filled romance with a dark and dangerous character that we meet in this book. I’m looking forward to seeing how that progresses in upcoming books.

I really enjoyed the descriptions of the town and of the house. If I were to ever go to a writer’s retreat, this one sounds fabulous. There are trips to the library, ski hills, presenters, a published writer on hand to chat with, and so much delicious food!

As for the mystery itself, Cahoon gave us lots of red herrings, and I didn’t figure out the killer until close to the end, when Cahoon started dropping bigger hints. The mystery of Cat’s husband’s death plays a role in this book, and makes for a second mystery thread that began in the first one, and is still not solved.  The dark and dangerous character we meet in this book may have something to do with it, and the fact that he was introduced added another layer to this series that could let the author take the story in a lot of different directions.

I am looking forward to seeing how this series progresses, and if I find some time in my schedule I would like to read the first book, A Story to Kill.