Girl on the Run by Daryl Wood Gerber : Book Review 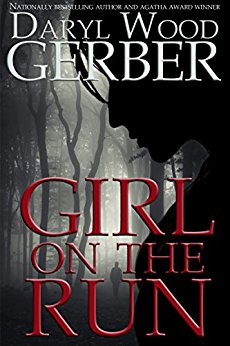 When a fairytale fantasy night becomes a nightmare, Chessa Paxton must run for her life…but will the truth set her free?

Chessa Paxton, an event planner in Lake Tahoe, celebrates a successful night at the Happily Ever After Ball, but her dream quickly becomes a nightmare when she wakes up beside the body of her dead husband. Nauseous and confused, feeling as if she’s been drugged, she can’t explain to the sheriff why her princess costume is bloodied. With her father already a convicted murderer, she feels invisible shackles ratcheting onto her wrists and ankles. She runs! But she can’t escape vivid flashes of memory: a massacre in a meadow; men and women in fairy tale costumes; Snow White’s dead body shielding her from bullets.

Though Chessa is a former costumer and a master of disguise, she quickly learns that hiding while trying to prove herself innocent is the most difficult task imaginable. Especially when the sheriff wants to throw her in jail and the real killer wants to silence her forever.

Daryl Wood Gerber, who is known for her Cookbook Nook Mystery series, has taken the plunge and wrote a thriller, for which she did a fantastic job. Anyone who likes John Grisham, Scott Turow, Steve Martini, or Joseph Finder will definitely enjoy this book. Or if you’re a fan of The Fugitive (either TV series or movie), you’ll want to give this one a read.

I was drawn to this one, not only because I read the Final Sentence, the first book in the Cookbook Nook cozy series, and really enjoyed it, but it drew me in because of the fairy tale ball, and that it’s a Thriller written by a woman. So many are written by men, as evident from my list in the above paragraph, that it’s wonderful to find a female author that writes Thrillers.

At the ball, Chessa is already seeing things that don’t quite make sense, putting her on edge. Shortly afterwards, she wakes up next to her dead husband, and events really start moving fast. Gerber does a wonderful job keeping the tension up and the action moving. There are so many secrets, and continual threats to Chessa, that you want to keep reading to see what happens next.

Besides the mystery and action scenes, Gerber has written really well developed characters. There are ones I disliked, and others, besides Chessa, that I was rooting for. There are complex family relationships, that really shine towards the end of the book.

And one thing that I really enjoy about Thrillers, compared to Cozies, is that it’s often harder to figure out the bad people, and what their motives might be. Gerber did not disappoint in that regard, and had me wondering until near the end.

A fantastic foray into the Thriller genre, and one I highly recommend you read.