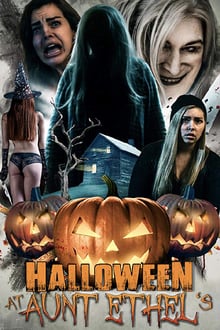 “Everyone in town knows the story of Old Aunt Ethel. It’s said she makes Halloween candy and pumpkin pie out of the kids that trick-or-treat at her house. Is Aunt Ethel really a mental case with a taste for children? This Halloween, the neighborhood teens are going to find out the truth. They have something special planned for Aunt Ethel. This might just be someone’s last Halloween.” Amazon

Boobs, Sex, Cannibalism, and Witches. I put the main contents of this movie in order of how much you see. So if you like any of those four things, but mainly the first three, this movie might be perfect for you.

It’s a bad movie. It knows it’s a bad movie. I think the writers had fun writing it, and actors had fun acting in it. For me it’s wasn’t so bad, it’s good, like Wolf Cop. It was more like I was watching some friends who put together a movie, and their dad owned a strip club, and the strippers starred in it to make some extra money.

The actors were over the top, sometimes amusing, sometimes really bad. The story line was basic, but the end amused me. The special effects were pretty basic too. Would I watch it again? No. Do I hold that against the movie? No, I knew I was in for a cheesey, sex-filled movie from the beginning.

But if you have nothing better to do, invite some friends over, or watch it alone in your mom’s basement, and enjoy some bad horror-comedy.