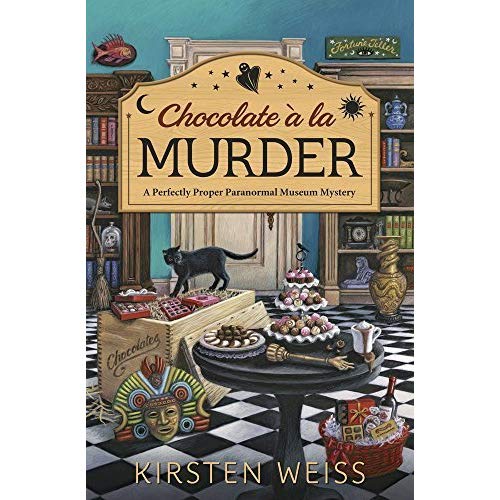 It’s Wine and Chocolate Days in San Benedetto, and paranormal museum owner Maddie Kosloski has sweet dreams about her new Magic of Chocolate exhibit. Her latest attraction is a haunted Mexican whisk called a molinillo that rattles if someone lies.

When Maddie visits the town’s new boutique chocolate shop, she finds one of the owners dead and covered in melted cocoa. Maddie’s determined to catch the killer, and she soon uncovers deadly dealings in the world of artisan chocolate. But the deception surrounding those dealings are enough to make the molinillo rattle all night. Will Maddie have to temper her passion for sleuthing before a killer makes her fate bittersweet?

I am still enjoying this series, although I’m not going to be raving about all of the book as much as I did in my review of the first book in the series, The Perfectly Proper Paranormal Museum.

When looking over my reviews to see what I had written about the second and third book in the series, I saw that I had not done a reviews. There was a long bit of time I was burned out from writing reviews and running my website, and it must have been during the time I read those two books. I do remember enjoying Pressed to Death and Deja Moo though.

Pressed to Death had the great setting, taking place at a Harvest Festival with lots of wine, and Maddie and her mother worked together in solving the mystery. Which was a great way to get to know her mom more. I also remember there was a big reveal with her love interest, Mason.

Deja Moo was also a treat with the straw Christmas Cow and the antics surrounding it. Maddie’s relationship with, Mason, her shop neighbor was totally upended in book two, which left it open for new romance in Deja Moo.

Which leads us to the Chocolate a la Murder. I’m going to start with the great, and then go onto the not as great. The extra mystery that we get in each book, the one in regards to the current haunted object Maddie has in her store, was a great device for letting us know something was up with Mason. Whenever the molinillo (the haunted Mexican hot chocolate whisk) would rattle, it meant someone was lying. Mason kept stopping at her shop, and it seemed to rattle every time he started talking.

The descriptions of the museum are still wonderful. But all the weather seemed to involve fog. It’s strange to feel so ambivalent to fog, but after all her descriptions, which I felt never really lead to anything, that’s how I feel. Which is kind of sad, because we don’t get a lot of fog in Wisconsin, but when we do I always enjoyed it because I felt like I was entering a Stephen King novel.

There was more interaction with GD (Ghost Detecting) cat, although most of it involved GD biting her, or Maddie feeding him. I’m waiting for GD to help her solve one of the mysteries.

Now onto the not so great. And I feel really bad, because this series is my catnip, as explained in my review of the first one in the series.

I really didn’t feel like there was any character development, or if there was, it made the characters a bit annoying. In a previous book we found out Harper was a Strega (Italian Witch). So many things Weiss could be doing with that, but instead Harper has barely any action in the book, except to commiserate with Maddie in regards to how annoying Adele is being with her wedding planning. There is a bit at the end with Harper wanting to try a different path in her life, besides being a witch, that could be a great set up for future novels. So here’s hoping!

As mentioned Adele is just being annoying. But as I always say, if a writer has me super annoyed or hating a character, then they must be doing a really good job writing them. So that is great, I just don’t want it to continue.

And now for the love interest. I thought about how to write this for a half an hour. There is no love triangle, for which I am very happy. I’ve stopped reading great book series because the love triangle just kept going, leading nowhere. But going from a love, Mason, that Maddie was passionate about, to just a lukewarm character, Jason, that she seems to fight with constantly, is just not endearing Maddie or Jason to me. All I can say, is I trust Weiss knows what she is doing, and something great will come of this.

And as for Maddie’s horrible relationship with Det. Hammer, at this point, it’s just horrible. At first it added some much needed drama, now I just dread reading it. To make Det. Hammer a spiteful person who just seems out to get Maddie no matter what, without giving us a good backstory, just isn’t cutting it for me anymore.