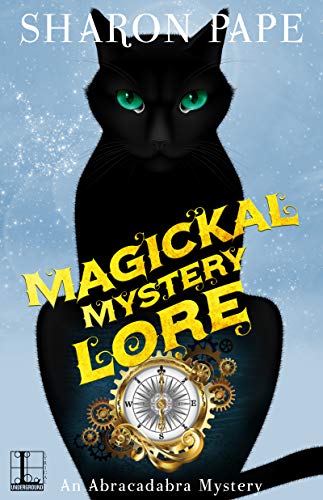 “The New Camel Day Fair is a fun-filled event for residents of this upstate New York town. Kailyn Wilde, a modern-day witch of ancient lineage, leaves her potion shop, Abracadabra-and her feline familiar, Sashkatu-to attend with her fortune-telling Aunt Tilly. Joining them is legendary wizard Merlin, who’s discovering new pleasures of time-traveling to the modern world, including curly fries and kettle corn-but the appeal of the Tilt-a-Wheel is beyond his mystical imagination.

The real wild ride begins later, when neighboring sweet shop owner Lolly rushes into Abracadabra with news about a dead body. The victim has one of Lolly’s fudge knives stuck in her back, but in spite of the sticky evidence, Lolly is only one of several suspects with ample motive and opportunity. Meanwhile, Merlin’s research into old family scrolls and electromagnetic ley lines is causing some unusual mix-ups. As the two investigations collide, Kailyn will have to do everything in her power to prevent disaster…” Amazon

This is the fourth book in the Abracadabra Mystery series, and while you don’t need to read the previous three, I think it would be a good idea. I felt a bit left out as to what had happened to Kailyn’s mother and grandma. And it was touched on a little, how Merlin had come to be in this time period, but I got the feeling his crazy adventures were a bigger part of the previous books.

On the other hand, I’ve read series with lots of books in them, where the author does give background in each book, and I find myself skimming, or skipping it completely. But at least with those books, I have the option to do so, if I want.

I loved the interaction between Kailyn and her familiar, Sashkatu. In a book I recently read pretty much the whole interaction was to feed the cat or have the cat bite her, so it became boring very fast. But not the case with Kailyn and Sashkatu, their interactions were fun, and Pape really gave the cat a personality, and didn’t just use it as filler for the book.

As for the romance with Travis and Kailyn, I don’t know, maybe I’m just getting old and my rose colored glasses are getting too many scratches on them, but please, all authors, just stop the continual fighting. Yes, everyone has arguments in a relationship, but not all relationships have as many fights as they seem to in books. And changing it up, would be great. Have the woman leave the relationship. Find a person who supports her, and doesn’t keep things from her.

But like I said, maybe I’m just getting cranky in my old age, and their relationship won’t bother you at all. It wouldn’t stop be from reading the previous books in the series, and I would be even willing to try book five to see if the relationship gets better, or ends.

The magical powers that Kailyn and her Aunt have, were used well in the book. They helped to enhance, and move the story along. The way the book ended will see even more impressive powers being used in the next book. And the way Pape left it, I can see a lot of possibilities for book five.

As for the mystery, while I knew pretty early on who the killer was, the way Pape had side plots and red herrings was done very well. Even though I knew who did it, the why, was done in a very original way. It makes me want to read the previous books to see if she was as creative in those ones too.