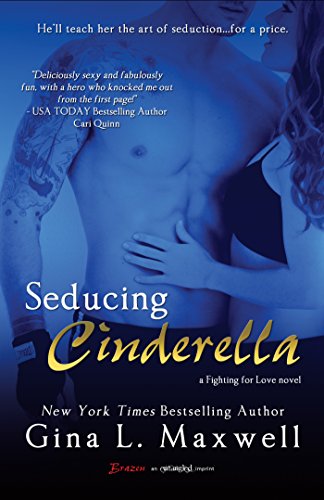 “Mixed martial arts fighter Reid Andrews’s chance to reclaim his title as light heavyweight champ is shattered when he’s injured only months before the rematch. To make sure he’s healed in time, his trainer sends him to recuperate under a professional’s care–Reid’s best friend’s little sister, all grown up.

Disorganized and bookish Lucie Miller needs some professional help of her own. She’d do anything to catch the eye of a doctor she’s crushed on for years, so when Reid offers seduction lessons in exchange for 24/7 conditioning for the biggest fight of his career, Lucie jumps at the chance. Soon Reid finds himself in the fight of his life…winning Lucie’s heart before she gives it to someone else.” Amazon

My college roommate recently introduced me to Gina L. Maxwell’s books, and I’m glad she did. Our library system only had Seducing Cinderella, but after reading it, I ordered all the rest that are available in Ingram. So now, even more people will have the enjoyment of reading her. If you’ve never had that pleasure, after you read this review, make sure to purchase some of her books.

This is a very steamy romance. And you know what made it even hotter for me than the sex scenes? Even though, at first, Reid thought of Lucie as his friend’s little sister, when she wanted to be with him, there was no big brother rushing in to save Lucie’s virtue. She is an adult, and Maxwell wrote her as one.

Another thing that is great, is even though this was the first published book for Maxwell, it doesn’t read like it. It is very well edited, the story flows perfectly, and her character development is outstanding.

And I realized the ebook came out before the paperback version I read, so it was in 2012. It came out just a couple of months after 50 Shades of Grey. I really wish, Seducing Cinderella, would have became a national phenomenon instead. There is much more depth to this book. And to me, Lucie is a much more likeable character. As well as the type of person I would like to see more woman be; strong, independent, and not continually questioning her sexuality.

I am looking forward to reading the second book in the Fighting for Love series, Rules of Entanglement. A rule abiding D.A., a wedding that needs to be planned, and a sexy MMA fighter, sounds like a hot Friday night read to me!