Life Will Be the Death of Me… And You Too! by Chelsea Handler : Book Review 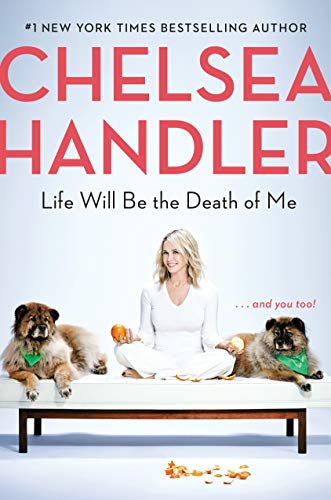 Title: Life Will Be the Death of Me… and You Too!
Author: Chelsea Handler
Publisher: Spiegel & Grau
Release Date: April 9, 2019
Pages: 247
Book Source: eBook

“In a haze of vape smoke on a rare windy night in L.A. in the fall of 2016, Chelsea Handler daydreams about what life will be like with a woman in the White House. And then Donald Trump happens. In a torpor of despair, she decides that she’s had enough of the privileged bubble she’s lived in—a bubble within a bubble—and that it’s time to make some changes, both in her personal life and in the world at large.

At home, she embarks on a year of self-sufficiency—learning how to work the remote, how to pick up dog shit, where to find the toaster. She meets her match in an earnest, brainy psychiatrist and enters into therapy, prepared to do the heavy lifting required to look within and make sense of a childhood marked by love and loss and to figure out why people are afraid of her. She becomes politically active—finding her voice as an advocate for change, having difficult conversations, and energizing her base. In the process, she develops a healthy fixation on Special Counsel Robert Mueller and, through unflinching self-reflection and psychological excavation, unearths some glittering truths that light up the road ahead.” Amazon

I finished this audiobook in about a days time, but it has taken me over two weeks to process and really sit down and write this review. The information in the book isn’t overly complex, but I couldn’t decide if I liked the book or not. With that said, I would give the book 3 out of 5 stars.

I should preface my review by saying that I have been a big fan of Chelsea Handler for the longest time…probably since the early days of Chelsea Lately. I have read two of her other books: Are You There Vodka? It’s Me, Chelsea and My Horizontal Life: A Collection of One-Night Stands. This book is nothing like those.

Approximately the first half of the book detailed Chelsea essentially having a “midlife crisis,” if you can call it that. She goes into detail about how Donald Trump running and later becoming President really shook her to her core and was the key contributing factor in her reevaluating her life. She delves into the death of her brother, non-traditional upbringing in several aspects some of which include her mother being from Germany, and her detailed description of her father essentially being a poor version of Donald Trump.

I was impressed with how detailed she was in regards to her feelings of rejection and how she believed it really started when she was 9 years old after her brother passed away. And how it just continued with her relationship with her parents, specifically, her father in regards to how she could never rely on him. A majority of these revelations are brought to light when she starts seeing a new therapist who really seems to help Chelsea understand things that she previously didn’t even consider.

This book delves into privilege, race, politics, etc, all the while including some funny tidbits about her Cho Cho’s.


Overall, I felt the story was well written, and the fact I listened to the audiobook, having Chelsea herself narrate the book was perfect! That said, this is definitely a more serious book which isn’t exactly what I was expecting. If you are a fan of Chelsea Handler, I would recommend this book. If you are looking for a funny, light-hearted, summer read,  I would steer you towards My Horizontal Life: A Collection of One-Night Stands.