Happy Birthday to Me : Movie Review 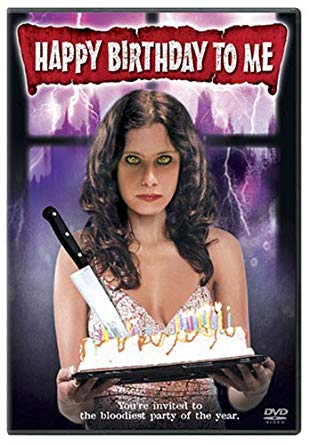 “Get ready for a taut mystery-shocker that will keep you at your wit’s end and at the edge of your seat. Popular high school senior Virginia Wainwright (Melissa Sue Anderson) survives a freak accident, but suffers from memory loss and traumatic blackouts. As she attempts to resume a normal life, something terrible is happening – her friends are ruthlessly murdered one-by-one. Will she be the next victim or is she the killer? The terrifying truth is finally uncovered at Virginia’s 18th birthday party and you’re invited!” -Amazon

When I was in middle school, many moons ago, I read a book that I swear was titled, Happy Birthday to Me. I vaguely recall it being about an assasin who was after the birthday boy. When I tried looking it up on the interwebs, I could not find anything. So readers, if you know what book I’m talking about, please let me know!

Which brings us to 2019. I was browsing the local library’s catalog and found this, ummm…gem. With the woman on the cover it didn’t jog my memory as to having watched it before. And I knew it wasn’t an adaptation from the book I read years ago, but I decided to give it a watch.

Part of the way through, I remembered I had already seen it, but it had been released with a different cover. I kept watching anyway since it’s been at least 25 years since I’ve watched it. But I love the nostalgia I get from VHS cover art, and how it can reminder me if I’ve seen a movie before.

The movie was a typical 80’s slasher film. Throw in teenagers, parties, nudity, and drinking and it’s all been done many times before. Where this cult classic is a bit different… really, who am I trying to kid?!? Movies become cult favorites for various reasons, but this one could be for it’s terrible over-acting, main character who yells more than she talks, and the fun ways that people get murdered.

This was many years before The Final Destination series, so seeing someone get a kabob stick jammed in their mouth was a new and exciting way to die.

I’m giving this one five stars because it is so horrible, but yet they do try to give you an actual reason for the killing. Although that was the part that I liked the least. If the killer would have just been a homicidal maniac, and not have a reason, I would have been perfectly fine with it. But the twist did amuse me a bit.

If your birthday is coming up, or even if it’s not but you enjoy bad 80’s horror, you’ll want to give this one a watch.