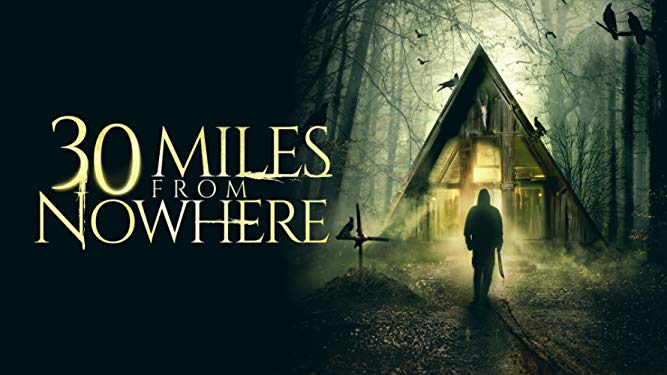 “After the untimely death of their old college pal, five friends (and one new girlfriend) descend upon the Wisconsin summer home they frequented in their 20s. The creep factor at the cabin is high, with a thumping in the crawl space, blood spurting from the pipes, and a cockroach infestation in the guest bedroom. When a storm moves in, trapping them in the woods, they find themselves faced with the ultimate human dilemma, to kill or be killed, in order to make it until morning.” – Amazon

I was trolling Amazon for my Monday night horror movie fest, and I came across 30 Miles from Nowhere. What drew me in was that the movie takes place in Wisconsin (although a lot of it is filmed in Illinois).

I am not always the best with remembering actor’s real names (better at remembering their character names), so when Rob Benedict came into frame, I was super excited because I enjoy his character Chuck/God in Supernatural.

I also thought Carrie Preston looked familiar, so after the movie I googled her, and realized it was from the season and a half that I watched of True Blood. Really enjoyed the Sookie Stackhouse book series by Charlaine Harris, but didn’t get into the TV show as much.

Anyway, back to the movie. When Larry and Elaine walk into the bar at the beginning, the entrance looks a lot like the barrel entrance to the Hilltop Pub in Wisconsin, so I thought that was fun. But I don’t think it was that place because the rest of the bar didn’t look the same. Anyone out there who watches this, and knows for sure, leave a message in the comments.

This had elements of a teenage slasher flick, but done with older people. Something I don’t see a lot of, so that was a nice change. The acting itself was done very well, compared to most of the B horror movies I’ve seen, and quite a few Indies. For those two things alone, I would recommend this movie.

I also liked that for most of the movie, the characters knew something weird was going on. At first, they didn’t want to believe the new girlfriend, but that quickly changed. All the weird things that began taking place; violent sounds coming from the basement, people peeking in windows, blood flowing from the drains, etc… added a nice touch of, What the F#ck is happening.

The ending added a refreshing note to something that has been done before. I would say watch this one with a group of friends, and afterwards remember the ones who said, “I would never do that.”