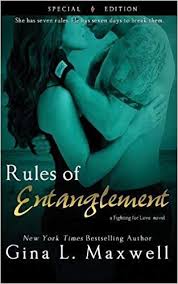 “District Attorney Vanessa MacGregor firmly believes that structure and order are the stuff that dreams are made of. Happiness can be planned–and it starts with the seven rules she’s laid out for her future. But as she’s organizing her best friend’s wedding in Hawaii, all of Vanessa’s best-laid plans are about to meet their match in a wickedly hot MMA fighter…

Jackson “Jax” Maris is focused on surfing, training, and fighting. That is, until he opens up his big mouth and finds himself having to pretend he’s engaged to his little sister’s best friend, Vanessa. When they’re forced to share a romantic bungalow, however, their little charade suddenly takes a turn for the seriously sexy. And while Jax is definitely not part of Vanessa’s long-term plan, he has seven days–and seven naughty nights–to turn her seven-rule plan upside down.” Amazon

Just like the first book in Gina L. Maxwell’s, Fighting for Love series, Seducing Cinderella, this book was hot. The location and the sex scenes! And although this is a series, you can read the books out of order or just by themselves if you want to, but why would you! The more, the better.

I love that Maxwell writes strong female characters. I don’t want to read about timid women who refuse to accept that they deserve to be loved and desired. All women are Goddesses, and we should be treated as such. Vanessa knows what she wants in love and in life, and she goes for it.

And Jax. I have never had a book boyfriend. I’ve never found one that made me think the real man in my life isn’t enough. But…. Jax is the perfect mixture of domineering, sexy as hell, and loving. If I wasn’t married, I would love to find a man like this… even for just a night!

Of course, with any romance book, there’s a bit of will they or won’t they. And people’s emotions get jumbled up, leading them to bad decisions. But Maxwell seems to put just the right amount of this in her books, as least for me. I get so bored (and end up skimming) books that drag this type of drama on and on.

Next time I’m in the mood for a steamy romance, I will be reaching for book three in the Fighting for Love series, Fighting for Irish. A woman who owes money to a mob boss (thanks to a crappy ex) and an MMA fighter willing to do whatever he can to help and protect her. Can’t wait to see where that story leads.