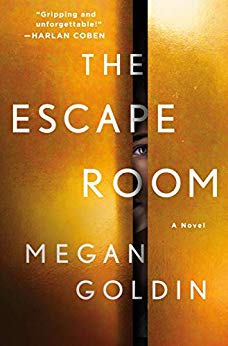 “Welcome to the escape room. Your goal is simple. Get out alive.

In the lucrative world of finance, Vincent, Jules, Sylvie, and Sam are at the top of their game. They’ve mastered the art of the deal and celebrate their success in style—but a life of extreme luxury always comes at a cost.

Invited to participate in an escape room as a team-building exercise, the ferociously competitive co-workers crowd into the elevator in a high rise building, eager to prove themselves. But when the lights go off and the doors stay shut, it quickly becomes clear that this is no ordinary competition: they’re caught in a dangerous game of survival.

Trapped in the dark, the colleagues must put aside their bitter rivalries and work together to solve cryptic clues to break free. But as the game begins to reveal the team’s darkest secrets, they realize there’s a price to be paid for the terrible deeds they committed in their ruthless climb up the corporate ladder. As tempers fray, and the clues turn deadly, they must solve one final chilling puzzle: which one of them will kill in order to survive?” Amazon

I wanted to read this book because I really like doing Escape Rooms and enjoyed the Escape Room movie. So I wanted to see what Megan Goldin would do with the premise in a book. While the escape room clues themselves were easy and didn’t play a huge part in the story, they still helped to add another layer to the novel.

Goldin really excelled at describing the characters, which makes sense, since most of the book takes place inside of an office building or an elevator. But with these two main environments, she was able to write an atmosphere with a sense of stress, menace, and dread.

And with the characters themselves, Goldin did such an amazing job at making you feel for them, but then dislike them, but then, maybe feel for them again. Only to turn it back into hate. She engineered the roller coaster of emotions like a master.

One of the things that makes if difficult to write reviews for mysteries and thrillers is that I don’t want to give too much away. I want you to experience all the red herrings and twists that I do. For me though, The Escape Room, had twists that I saw coming and clues that were easy to solve. Normally this would make me give the review less stars, but Goldin kept me intrigued, and the story was so well put together that I not only want to give it five stars, but highly encourage you to read it.

I would love to hear your thoughts on this one, or let me know if it’s going in your beach bag.