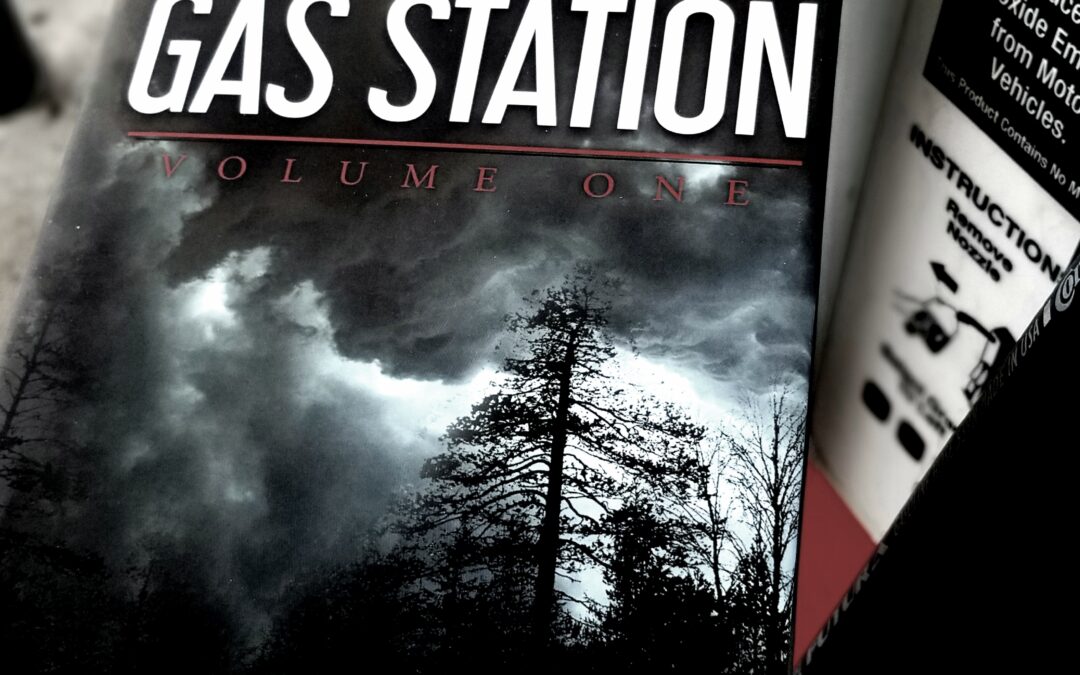 “Working at a dead-end retail job in the middle of nowhere can be hard. The long hours. The helpless customers. The enormous eldritch horror living deep below the building…

As the only full-time employee at the twenty-four hour gas station at the edge of town, Jack has pretty much seen it all. But when he decides to start an online journal documenting the bizarre day-to-day occurrences, he unwittingly attracts the attention of much more than just a few conspiracy theorists. With the body count steadily on the rise and a dark, ancient force infecting the dreams of everyone around him, Jack will do everything in his power to stay out of the way and mind his own business.

After all, he’s just a gas station clerk. It’s not like he’s getting paid enough to wage battle against the nightmarish aberrations plaguing his community. Besides, he already has his hands full attempting to manage all those mysterious lawn gnomes, the mutant raccoons, and the charming phantom cowboy who lives in the bathroom.

Based on the award-winning creepypasta by GasStationJack, Tales from the Gas Station: Volume One is a love letter to the pioneers of classic horror tailored to a generation that grew up in the era of smartphones and WiFi.” – Amazon

“I don’t need to climb a mountain or visit the Grand Canyon to know what Zen feels like.”

I did a little bit of research on the author, Jack Townsend, and it seems like he was internet famous before the rest of us even knew what it meant to be internet famous.  He has a tremendous following on Reddit and Creepypasta.

Creepypasta is a collection of short (and some not so short) scary stories told by people all over the world.  Some of them are up and coming authors attempting to make their way as a famous writer and are actually quite good.  Some may be written by a kid in junior high trying to get through the day while simultaneously collecting his 15 seconds of fame.  It usually only takes a paragraph or two to determine if it’s the former or the latter.

Don’t think for a second Townsend simply copied his blog and chucked it into a book.  That isn’t the case at all. I was unfamiliar with Jack’s story on the internet and bought the book sight unseen.  I’m so glad I did! His writing is dark, sarcastic, witty, silly and funny. It’s a bizarre combination, I know and one I really can’t explain, but I’ll do my best.

“I did have a question.”

“I’m still not hearing a question.”

I finished this book last night and I was lying in bed trying to think about how to write this review.  How in the heck do you begin to tell someone what this book is about? How can I possibly begin to eloquently tell you the concept of this book?  Unfortunately, I don’t have the answers to either of those questions. “Tales from the Gas Station, Volume 1“ is bizarre.  I know it sounds like that has a negative connotation to it, but that’s not at all what I mean.  It is strange. There is no doubt about that, but it’s written in a way that made it impossible for me to ever be bored with the story line – despite how random the author made it out to be.

The main character, Jack a.k.a. Gas Station Jack, is a full-time employee at the “shitty little gas station at the edge of town”.  (his words, not mine) I have never in my entire life related more to a character than I did Jack. That’s a bold statement, I know.  I am dead serious. TV, books, film, comic books, school plays, fictional, non-fictional or otherwise, Jack had me nodding in empathy, laughing at his words ’til I was in tears and overall, agreeing with everything he said and did in this novel.

He goes about his everyday life with a level of IDGAF and sarcasm that rivals the best of the best.  Despite how nonchalant he is about everything, the gas station he works at is built on top of an evil entity.  He makes the daily coffee in the morning, he interacts with the locals and he writes in his blog. While going about his mundane everyday life, an evil is building and growing under the gas station.  Jack continues blogging about the weird stuff going on at the gas station and begins asking his followers and fellow co-workers for advice on how to proceed. I know. I get it. It sounds super lame.  It really does. Trust me when I say, it isn’t. If it were any other character, the novel would have gotten a sub-par review. Jack’s witty sayings, sarcasm and attitude make the story entertaining from beginning to end.

I looked at some of the other reviews of this book and those that gave it a poor mark did so because they felt like there were numerous unanswered questions and the ending was kind of up in the air.  They’re absolutely right. All of that is true, but it was painfully obvious at the end of the book that a second book was in or would be in the making.

Also, Jack Townsend (the author, not the gas station employee) indicated in his Instagram feed last week that Volume 2 will be out soon!  I’ve been refreshing Amazon on a daily basis because I will be pre-ordering it the moment it is available.

Is the book funny?  Heck yeah it is! Is it scary?  It most definitely is! Is it bizarre?  Absolutely! It is every genre rolled into one which makes it a solid 5-star review in my eyes.  Maybe I’m biased because I found myself relating to Jack so often throughout the story. 🙂