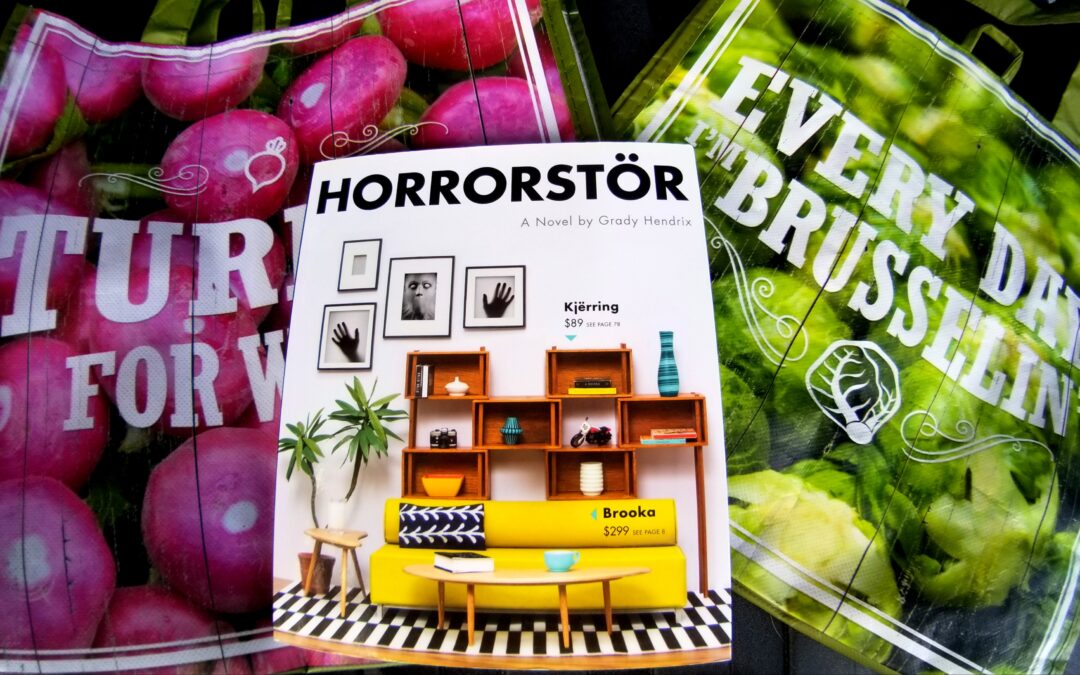 “Something strange is happening at the Orsk furniture superstore in Cleveland, Ohio. Every morning, employees arrive to find broken Kjerring bookshelves, shattered Glans water goblets, and smashed Liripip wardrobes. Sales are down, security cameras reveal nothing, and store managers are panicking.

To unravel the mystery, three employees volunteer to work a nine-hour dusk-till-dawn shift. In the dead of the night, they’ll patrol the empty showroom floor, investigate strange sights and sounds, and encounter horrors that defy the imagination.” – Amazon

Orsk is an imposter Ikea furniture mega-store.  They’re a knock-off. They’re a sham. They’re a retail giant that sells cheap furniture in flat cardboard boxes.  It’s thousands of square feet and it’s haunted. As the brief synopsis indicates, things are being broken, there are weird smells, managers are going crazy trying to figure out what in the heck is going on with this store.  It’s up to the efforts of a few brave employees to get to the bottom of this mystery once and for all.

“The more Amy struggled, the faster she sank.  Every month she shuffled around less and less money to cover the same number of bills.   The hamster wheel kept spinning and spinning. Sometimes she wanted to let go and find out exactly how far she’d fall if she just stopped fighting.  She didn’t expect life to be fair, but did it have to be so relentless?”

*sigh*  Horrorstor.  Damn you.  I had such high hopes for you.  Here’s the good:

Have you ever been to an Ikea?  I’ve been to a few. They’re a novelty and if you’ve never been, you need to see it for yourself just once.  Take a look at the cover of this book. It’s brilliant. It is the spitting image of an Ikea catalog right down to the font and design.  The furniture names throughout the book are so well done. There’s even a faux order form included! There’s instructions and store FYI’s and coupons and everything!  No detail was left to chance. The packaging, the concept, the design… it’s genius. It really is. A ghost story in a giant retail store set-up like an Ikea? It seems like a brilliant Ikea!  I mean, idea! I saw the cover of this book and I knew I had to have it.

The writing at times was really good.  The scenery that was described and the ambiance was great.  I felt like I was in the middle of the story, clinging to a dimly lit flashlight in the middle of the night surrounded by furniture made out of cheap medium-density fiberboard.  It was spooky and eerie at times and again, during a few occasions, the writing was impressive. It really was.

Unfortunately, the overall execution fell really short, in my opinion.

So if you’ve been to an Ikea before, you know their stores are enormous.  It’s a labyrinth of cheap Swedish furniture. Like Willy Wonka once said, you can’t go backwards.  You’ve got to go forwards to go back. Better to press on. It drove me absolutely crazy that the author expected me to remember the layout of this store and where the characters were coming or going.  Oh, so Amy is in Lighting and she needs to get over to Kitchen and then up to Living Room up to the registers back to the warehouse and then down to the break room to find what’s-her-name? Ohhhhh! It seemed like it was pertinent information to the story line and I eventually just gave up on knowing where the characters were at any given point in time.

Perhaps that’s why Grady Hendrix includes a map of the store so you can revert back to it throughout your reading.  It was maddening to me. He kept referencing these locations as though I worked there. There were so many locations and so many departments that I just found it impossible to keep track of.  When I read a book, I like to imagine I’m there with the characters. For example, if they’re standing on the corner of Maple Ave. and Oak St., I want to be there. I want to run when the characters start running and if they’re driving through the countryside, I want to be there, too!  It was terribly confusing and nearly impossible to remain engaged because of how haphazardly all of these various locations and departments were being referenced.

I tried to relate to these characters.  I really did. There was hardly any background and I just couldn’t find any sort of attachment to any of them.  They were shallow. There was no meat nor potatoes. I just couldn’t find any common ground and thus, it resulted in me not caring about any of them in a very short period of time.  Less than halfway through, I could feel the feeling of caring about anyone in this book slipping away from me and it saddened me a little.

I love paranormal stuff and ghosts and entities and energy and orbs and stuff like that.  There was a scene in the book where one of the employees has a duffle bag full of equipment to capture paranormal activity.  They go on and on and on about all this equipment they have. And that was it. It was never used. Never mentioned again. After reading that and then reading 30+ more pages, I was, like, Heyyyyyyyyyyy… WTF happened to all that ghost hunting equipment?  …I was so bummed!  *grrr!*
Just like the characters and the ghost hunting equipment and the confusing maze of crappy Swedish furniture, the story just seemed to have all these loose ends.

Nothing was polished and finished. New things were being randomly introduced with no rhyme nor reason. Everything just seemed confusing and unkempt. It’s, like, the author and his design team spent months and months and months on the concept and the design and then slapped the writing together in a couple of weeks.  The more I read, the more I wanted answers. None of the answers ever came.

OK. You didn’t use the fancy ghost hunting equipment even though you mentioned it a few times. I forgive you. What I cannot forgive is the fact that the story didn’t live up to the hype of the brilliant packaging and concept. It could have been so much more awesome!  That’s what disappointed me the most about Horrorstor.  I’m giving it 3 stars for the packaging, the concept and the mediocre delivery.  I’d love to know your thoughts on Horrorstor!