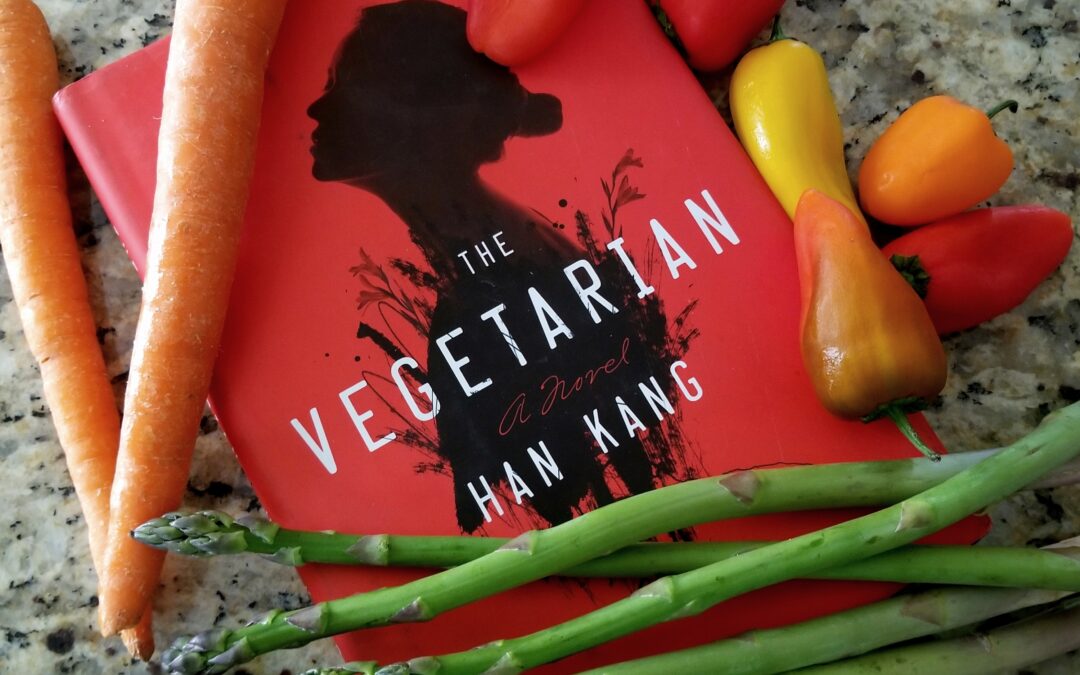 “A beautiful, unsettling novel about rebellion and taboo, violence and eroticism, and the twisting metamorphosis of a soul

Before the nightmares began, Yeong-hye and her husband lived an ordinary, controlled life. But the dreams—invasive images of blood and brutality—torture her, driving Yeong-hye to purge her mind and renounce eating meat altogether. It’s a small act of independence, but it interrupts her marriage and sets into motion an increasingly grotesque chain of events at home. As her husband, her brother-in-law and sister each fight to reassert their control, Yeong-hye obsessively defends the choice that’s become sacred to her. Soon their attempts turn desperate, subjecting first her mind, and then her body, to ever more intrusive and perverse violations, sending Yeong-hye spiraling into a dangerous, bizarre estrangement, not only from those closest to her, but also from herself.

Celebrated by critics around the world, The Vegetarian is a darkly allegorical, Kafka-esque tale of power, obsession, and one woman’s struggle to break free from the violence both without and within her.” – Amazon

After seeing the number of accolades and prestigious mentions for this novel, I was intrigued by the synopsis and thought it would be right up my alley.  It’s a painful story and quite bizarre at most times. Yeong-hye, the main character, has a dream. After her dream, she swears off meat forever and is determined to live the life of a devout vegetarian.  She continues having these vivid dreams and nightmares and continues following her own heart. She knows being a vegetarian is what she must do. It ultimately breaks her emotionally and mentally. Additionally, it causes her family a lot of undue grief and stress.  That was my take on the novel. I honestly didn’t love nor hate The Vegetarian.

“‘I’m acting like this because I’m afraid you’re going to die!’

Yeong-hye turned her head and stared blankly at In-hye as though the latter were not her sister but a complete stranger.

After a while, the question came.  Why, is it such a bad thing to die?”

You know those pretentious book reviews that people write?  The ones that are, like, four pages long and they’re making a feeble attempt to act really philosophical?  And they’ll say things, like, “I have a Masters Degree in European Sociology with a minor in Marine Biology and thus, essentially, basically, formally, it is of my professional opinion, the main character has decided to become a vegetarian because she’s reverting back to her childhood when she was 67 months of age and saw a piece of kelp sticking out of the ocean during a family vacation.“

Yeah, I’m not that dude.  Sorry not sorry.

The book is segregated into three separate Acts all from different points of view from characters in the book.  The first Act was brilliant and told from the perspective of Yeong-hye’s husband. I started reading, The Vegetarian and I physically got excited!  I was so pumped up! YESSSSS! This is gonna be awesome!! I really thought to myself that if the book kept up the way it had started, I would be finished with it in no time at all.  It started out THAT good.

Then I got to the second Act in the story told from the perspective of her brother-in-law.  I remember closing the book and looking at the cover to be sure I was still, in fact, reading the same book.  Indeed, I was. Dammit! What in the hell was going on here? The book was originally written in Korean and then later translated to the English language.  I often wonder if during this process some things are lost in translation along the way. I don’t read, speak nor write Korean. How can we be sure that the way Han Kang wrote the book was translated the way she intended?

By the time I inched my way to the third Act, I could sort of see (in my own way) what was happening to Yeong-hye.  The third and final Act is told from the perspective of her sister, In-Hye.  Like I previously mentioned, I felt fairly neutral when it came to The Vegetarian.  I think the entire book is open to interpretation in several different ways.  Was it about spousal abuse? Mental abuse? Mental illness? Anorexia? Starvation?  Meat? Veggies? Yes.

The Vegetarian, however, wasn’t a lost cause.  The writing style was unique and I enjoyed the concept, overall.  I just really wish it flowed with the style and fluidity of the first Act.  It didn’t and that left me so disappointed. The second and third Acts just got very bizarre.  Way too bizarre even for me and I love bizarre. The writing style changed and the focus shifted abruptly to this very strange eroticism between Yeong-hye and her brother-in-law and then later to Yeong-hye’s institutionalized due to her mental illness.  It was confusing, but sad. It was sad, but powerful. It was powerful and then oh so, annoying. My feelings about this book changed as quickly as those last few sentences in this review. Maybe if I had a Masters Degree in European Sociology with a minor in Marine Biology, I would have appreciated it more.