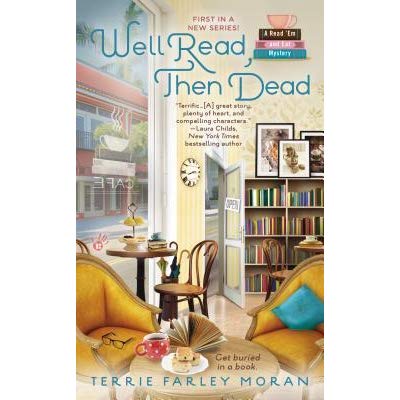 “Read ’Em and Eat is known for its delicious breakfast and lunch treats, along with quite a colorful clientele. If it’s not Rowena Gustavson loudly debating the merits of the current book club selection, it’s Miss Augusta Maddox lecturing tourists on rumors of sunken treasure among the islands. It’s no wonder Sassy’s favorite is Delia Batson, a regular at the Emily Dickinson table. Augusta’s cousin and best friend Delia is painfully shy—which makes the news of her murder all the more shocking.

No one is more distraught than Augusta, and Sassy wants to help any way she can. But Augusta doesn’t have time for sympathy. She wants Delia’s killer found—and she’s not taking no for an answer. Now Sassy is on the case, and she’d better act fast before there’s any more trouble in paradise.” – Amazon

Well Read, Then Dead by Terrie Farley Moran is the first book in the Read ‘Em and Eat Mysteries. The concept really drew me to the book. I love to read and I love to eat. Moran’s descriptions of the cafe are wonderful. I wish we had that type of book store or cafe in the town I live in. The tables with the various author themes sounded awesome, and the titles of the various food items were super fun. Just to give you an example; The Old Man and the Sea chowder.

The two main characters, Sassy and Bridgy, were actually my least favorite of the characters. They were fine, but nothing about them really stood out to me. The side characters though… Aunt Ophie was a hoot. A cougar who spoke her mind and made a mess in the kitchen while she whipped up delicious food. And Augusta was a feisty woman who has a beautiful softer side. And the bit characters were really well fleshed out for not having as much story line.

The mystery itself was not as strong as other cozies I’ve read, but for a first in the series, it wasn’t bad. And I’m sure Moran will continue to get better with each book in the Read ‘Em and Eat Mysteries!