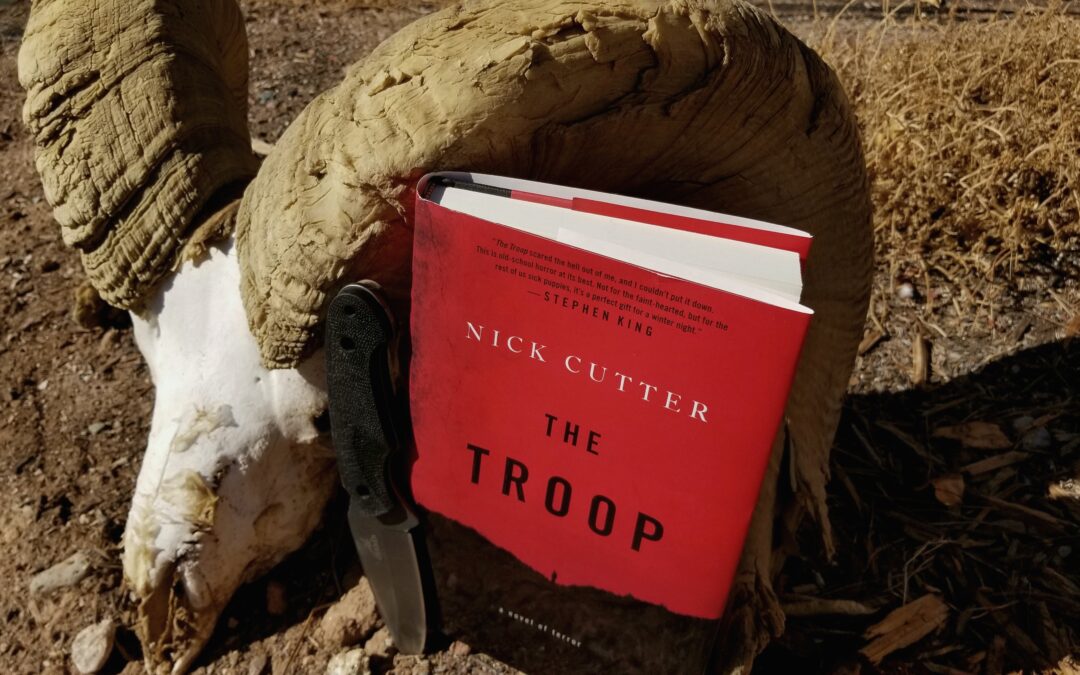 “The Troop scared the hell out of me, and I couldn’t put it down. This is old-school horror at its best.” – Stephen King

“Once every year, Scoutmaster Tim Riggs leads a troop of boys into the Canadian wilderness for a weekend camping trip—a tradition as comforting and reliable as a good ghost story around a roaring bonfire. The boys are a tight-knit crew. There’s Kent, one of the most popular kids in school; Ephraim and Max, also well liked and easygoing; then there’s Newt the nerd and Shelley the odd duck. For the most part, they all get along and are happy to be there—which makes Scoutmaster Tim’s job a little easier. But for some reason, he can’t shake the feeling that something strange is in the air this year. Something waiting in the darkness. Something wicked…

It comes to them in the night. An unexpected intruder, stumbling upon their campsite like a wild animal. He is shockingly thin, disturbingly pale, and voraciously hungry—a man in unspeakable torment who exposes Tim and the boys to something far more frightening than any ghost story. Within his body is a bio-engineered nightmare, a horror that spreads faster than fear. One by one, the boys will do things no person could ever imagine.

And so it begins. An agonizing weekend in the wilderness. A harrowing struggle for survival. No possible escape from the elements, the infected…or one another.

The Troop is definitely one of my favorite reads thus far!  I love camping. I love the outdoors. I love horror.  I love books that read very fast that seem as though they’re floating.  The Troop fit the bill for all of those things perfectly and thus, I was a happy camper.  Or reader. Whatever. After I closed the final page on The Troop last night, I was sitting in bed almost feeling exhausted.  That’s a compliment. That is something good. I don’t mean like I was exhausted and nauseated.  I mean, I honestly felt like I was right at the end of this book in that world. I had endured what these characters endured – at least from a mental and emotional perspective.  If that isn’t the sign of a good book and great writing, I don’t know what is. Yeah, it was that good!

“It is a fact that cannot be denied; the wickedness of others becomes our own wickedness because it kindles something evil in our own hearts.”

So I’m sitting in bed exhausted after having turned the last page of this book and I was thinking about this book review.  How in the great outdoors am I supposed to summarize this brilliance? …damn you, Nick Cutter for doing this to me. So as the synopsis indicates, Scoutmaster Tim drags himself and his Troop to Falstaff Island deep in the Canadian Wilderness.  It has become a tradition and a way for the scouts to earn their merit badges. Like most horror stories, all hell breaks loose when a stranger appears at the cabin in the middle of the night. The stranger is pale, clammy, feverish, the skin at his abdomen is crawling and he’s hungry.  In fact, it isn’t that he’s just voraciously hungry, he needs to feed.  Once Scoutmaster Tim decides he’s bound and determined to help this gentleman, the book is a whirlwind of horror, gore and brilliant storytelling.

I can’t do it.  I can’t give you anymore than that.  If I write anything else even remotely more specific to this book, I’d be opening Pandora’s Box for a whole slew of spoilers.  As most of you know, I don’t personally care for book (or film reviews) that are chock full of spoilers. Why would you want to see a movie that you’ve never seen after reading a review full of spoilers?  Makes no sense to me. I never understood that. Hey, The Sixth Sense was brilliant, you guys!  Awesome writing and acting!  Bruce Willis is dead. Anywho, enjoy the movie!  See? No fun. Makes no sense. You’re just going to have to trust me when I say The Troop is beyond amazing!

I looked at other reviews of The Troop and to be expected, it did fairly well on Amazon and Goodreads.  The majority of the negative reviews I read indicated that it was too gory.  They’re not wrong. It was gory, BUT it wasn’t over-the-top and at no point in time did I feel it was gratuitously gory just for the sake of being gory, if that makes sense.  In other words, it isn’t as though every other page was covered in blood and guts. It wasn’t like that. Anytime there was a scene that was particularly gory, I feel like the author did so to lend to the overall story line.  I don’t think Cutter was testing the First Amendment. I think his words and the gore he described was part of the story line. It’s a horror book. Yes, there is some blood and some gore. Perhaps this genre isn’t for you if the words “blood” or “gore” make you squeamish?  Perhaps I could interest you in a Family Circle comic. [insert roll eyes emoji here]  So yes, there is no doubt whatsoever that the book is graphic, but again, I do not feel as though it was distasteful at all.

It really upset me that a small percentage of the readers gave it scathing reviews because they couldn’t relate to the characters.  The teenage boys in the troop and part of the main character ensemble were just that – teenage boys. I guess I can’t expect everyone to relate to that demographic, but it is what it is, right?  They’re teenage boys. Sure, there was a wee bit of toilet humor and maybe a couple of extra “fucks” that were utilized as commas, but again, they’re teenage boys. As a guy who was once a teenage boy himself, I can attest to the fact their behavior and colorful language was accurate.

If anything, I think Cutter did a brilliant job bringing me to each and every scene he created.  After getting a positive nod from Stephen King, it’s worthy of five stars. I read this book as often as I could and setting it down made me sad.  It’s terrifying and scary. I was genuinely scared for these characters. No joke. The glimmers of hope were far and few between, but they were enough to keep me turning each page.  The storytelling was magnificent and the writing made for a fast read. It’s a book that belongs on your shelf if you’re a fan of the horror fiction genre. Highly recommended! All this talk about camping and gore has me feeling like I need to feed.  How do you like your S’mores?