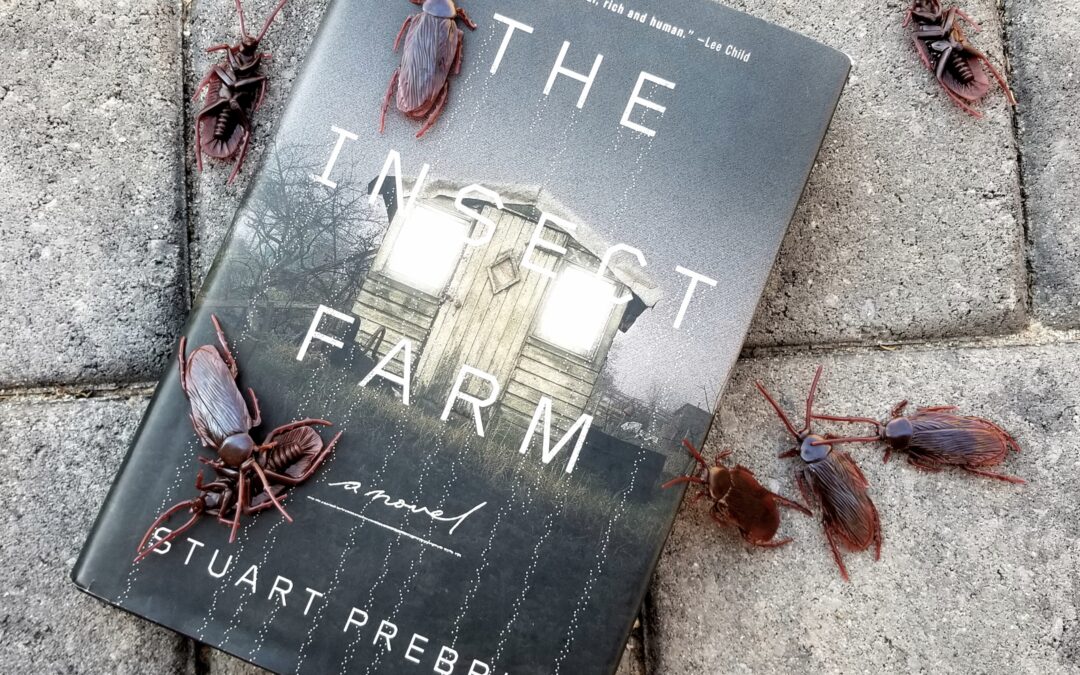 “An eerie debut suspense novel that explores how little one man may know his own brother–and his own mind.

The Maguire brothers each have their own driving, single-minded obsession. For Jonathan, it is his magnificent, talented, and desirable wife, Harriet. For Roger, it is the elaborate universe he has constructed in a shed in their parents’ garden, populated by millions of tiny insects. While Jonathan’s pursuit of Harriet leads him to feelings of jealousy and anguish, Roger’s immersion in the world he has created reveals a capability and talent which are absent from his everyday life.

Roger is known to all as a loving, protective, yet simple man, but the ever-growing complexity of the insect farm suggests that he is capable of far more than anyone believes. Following a series of strange and disturbing incidents, Jonathan begins to question every story he has ever been told about his brother–and if he has so completely misjudged Roger’s mind, what else might he have overlooked about his family, and himself?

The Insect Farm is a dramatic psychological thriller about the secrets we keep from those we love most, and the extent to which the people closest to us are also the most unknowable. In his astounding debut, Stuart Prebble guides us through haunting twists and jolting discoveries as a startling picture emerges: One of the Maguire brothers is a killer, and the other has no idea.” – Amazon

THE INSECT FARM took me by surprise in a pleasant way.  The story is set in the 60’s / 70’s in England and is told from the perspective of Jonathan Maguire.  The story opens with Jonathan as a teenager going through life in his parent’s home that he shares with his older brother, Roger.  Roger has a mental handicap and is fascinated with the insect farm he keeps in a shed in his parent’s backyard. He spends most of his time admiring his insects, studying the species and learning as much as he can.  Jonathan goes away to college, falls in love and later marries his girlfriend, Harriet, and then learns of a terrible accident involving the death of his parents. He is left to care for Roger and the story takes off from there with numerous plot twists and turns that kept me reading more each day.

“Amazing creatures,” he was saying.  “Seventeen different species all with no eyes or digestive system, but they land on a skeleton and insert little appendages like roots down in the bone, and then suck out the organic material.  After a few days, the whole thing disintegrates, and there is literally not a trace left.” He paused again. “They can be handy things, these insect farms.”

THE INSECT FARM is another first-person perspective book told from Jonathan’s point of view.  I really enjoy this perspective and style of reading. I find that it allows me to become the character and put myself in his/her shoes.  I suppose that’s personal preference, but I found myself being able to relate to the characters, especially Jonathan. I was equally vested in Roger and the dynamic of his relationship with his brother, Jonathan.

Like most other reviewers seemed to indicate, the first third of the book does start out a little slow.  I think the details being told to us in the first third of the book, however, are pertinent to laying the foundation of the relationship between Jonathan and Roger.  I think those pages are important to showcase the depth of Roger as well as the caring, albeit, sometimes naive nature of Jonathan. Yes, it most definitely did start off slow, but that didn’t bother me in the least.  I think that foundation was necessary otherwise, perhaps I would not have felt as vested in the characters as I did.

The verbiage used throughout the book is typical of England which means, as long as you don’t mind the occasional European jargon – it’s really not a problem at all.  Why can’t you just say “apartment” for crying out loud?  Why does it have to be a “flat“?  [insert roll eyes emoji here]  I’m just being silly.  No disrespect intended to my friends in Europe.  In another example, the author was talking about an instance that occurred when Jonathan was in “sixth form”.  I had no idea what this corresponded to as far as the grade that Jonathan was in at school so I had to look it up.  FYI – it’s the final three years of school for high school / secondary education.

I did have one gripe with the novel and that surrounds Roger’s character.  The only thing we’re told is he’s mentally handicapped, but I really wish this was defined.  I wanted to see more of Roger’s character and his development. “Mentally handicapped” is such a broad narrative and can mean dozens of different things to different people.  After the first few defined scenarios, it almost seemed like he was a high-functioning autistic adult, but I’m speculating. I really wanted to see this more clearly defined and it wasn’t.  I think that would have added to my vested interest in Roger in addition to lending to the storyline, overall. I’m really not going to complain about how slow the first third of the book was because as I mentioned previously, those details added to the story.  I don’t see how you could omit those details and have the book read the same.

I really enjoyed THE INSECT FARM!!  It was a unique suspenseful thriller that kept me turning page after page each day.  I do not want to go much more into the gory details of the storyline due to the risk of spoilers.  There were quite a few awesome plot twists and turns. One of them I figured out almost immediately, but a few of the others had me cupping my hands to my mouth like a little kid who just saw a magic trick.  I even had to go back and re-read a couple of paragraphs, like, did I just read what I think I did? Absolutely awesome storytelling, in my opinion. It was a brilliant page turner with an innovative storyline that kept me interested from beginning to end.  Highly recommended for fans of the thriller / suspense genre and/or any entomologist.