Her Missing Child by Kerry Watts : Book Review by Kim 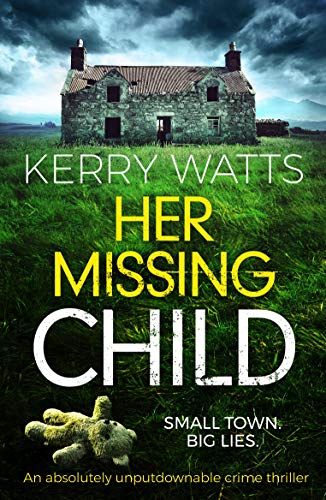 “When Claire Lucas is woken by her husband asking where their baby son is, she is dazed and confused. When she follows Darren into their child’s bedroom, she hears nothing but silence. No baby cries, no cute gurgles. The only thing left in Finlay’s cot is his beloved teddy bear. Finlay has gone.

Detective Jessie Blake rushes to the family’s modern home in the rugged Scottish Highlands. She notices that Darren avoids eye contact, and Claire seems disconnected – unable to account for the last few hours of her afternoon. Jessie knows there’s no normal response to losing a child, but something doesn’t feel right.

Friends rally round the young family, as a search of the narrow lanes and green hills of Moncrieffe begins in earnest. And as helpers battle the wild Scottish weather, Jessie is sure that someone in the search party must know more than they’re letting on. Someone must have seen something.

As a ghost from her own past comes back to haunt her, Jessie must put aside her own personal tragedy to save baby Finlay. Can she get the people of the small town to talk before it’s too late?” – Amazon

Even though a lot was happening in Her Missing Child by Kerry Watts, I didn’t feel like a lot of it had to do with the crime. A major character in this book was postpartum depression. It is a very serious condition, one that everyone needs to be aware of and what can be done to help, so I am glad Watts wrote about it. But, when I read a police procedural I want more scientific information, crime scene investigations, in depth interrogations, or courtroom drama. Not once were fingerprints taken or fibers/hairs looked for at the scene of the crime.

And throughout the book I kept feeling like I was missing something between Jessie and her ex-husband. It wasn’t until I was looking up information for putting the review up on the website that I realized it’s book two in the Detective Jessie Blake series.

Almost every book that I’ve read that’s not the first in the series, gives enough background information so you are caught up with the story and it can be read as a stand alone. Although Her Missing Child could still be read without reading Heartlands first, you may also get the feeling that you are missing an important piece of information. This could have been an easy enough fix and since I read an ARC maybe in the finished book this information will be included.

A few of the twists and turns of the story were interesting. And a few I didn’t see coming, which is always nice, but the ending felt like the author knew this isn’t a strong book and wanted to add something for shock value.

And some of the characters were pointless besides being used as a red herring and then not mentioned any more. Many of the other reviews comment that there are too many characters and it makes the book confusing. If Watts hadn’t been using them as red herrings, the number of people in the book would have been less, thus making the book easier to read, but there would not have been as many twists making the book very boring.

If you still want to read this book, I would suggest reading Heartlands first and go into this book knowing that it’s not as heavy of a police procedural book as others. If I had known this and decided to still read it, I may have given it a higher score.