In the Hall with the Knife by Diana Peterfreund : Book Review by Kim 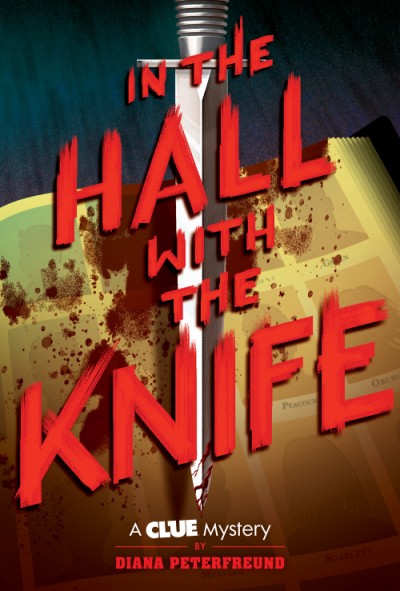 “When a storm strikes at Blackbrook Academy, an elite prep school nestled in the woods of Maine, a motley crew of students—including Beth “Peacock” Picach, Orchid McKee, Vaughn Green, Sam “Mustard” Maestor, Finn Plum, and Scarlet Mistry—are left stranded on campus with their headmaster. Hours later, his body is found in the conservatory and it’s very clear his death was no accident. With this group of students who are all hiding something, nothing is as it seems, and everyone has a motive for murder.

Fans of the CLUE board game and cult classic film will delight in Diana Peterfreund’s modern reimagining of the brand, its characters, and the dark, magnificent old mansion with secrets hidden within its walls.” – Amazon

I was nine years old when the movie Clue came out. We lived out in the country with no kids close enough for me to play with, and my sister is five years older than me, so she rarely wanted to do anything with me. Because of this, when I wasn’t wandering in the woods or reading, I was watching movies. And I must have seen Clue at least 20 times.

After reading In the Hall with the Knife, I believe Diana Peterfreund has watched it even more than I have! You could feel the love for the original story and characters in this book. Her nods to the movie were wonderful. Peacock having a meltdown like Mrs. White did in the movie and the splitting up of the students to search the three floors, to just name a couple similarities.

I really enjoyed how adult this YA book felt, as well as its complexity. The romantic relationships were not all wishy-washy with the, does the other person really love me vibe, being rehashed over and over. Instead you get a power couple who are not even intimate, and the others are not even looking at each other in that light because they are too busy trying to survive the raging storm and each other.

The descriptions of the mansion and its surrounding grounds were the perfect amount of detail so you could easily visualize everything. If you’ve played the board game or watched the movie, you know there is going to be secret passages. The teen who originally finds one is interesting in regards to the plans they have for the passage. It plays into the thought of secret passages being used for nefarious reasons. And then how one of the other passages is found makes for a bit of levity.

You get to know some of the characters a bit more in the first book in A Clue Mystery series. But Peterfreund still gives you enough insight into the others to make sure you are questioning everyone’s motives and who the killer could be. She also ends it in such a way that you know other characters are going to get more detailed in future books as the storyline progresses. And while the main mystery is tied up at the end, there is a small cliffhanger that plays perfectly for the next book.

While the killer wasn’t a big surprise with Peterfreund’s excellent placement of clues and some of the red herrings that were thrown in, I still found In the Hall with the Knife an excellent read, and am very much looking forward to the next one in A Clue Mystery series.