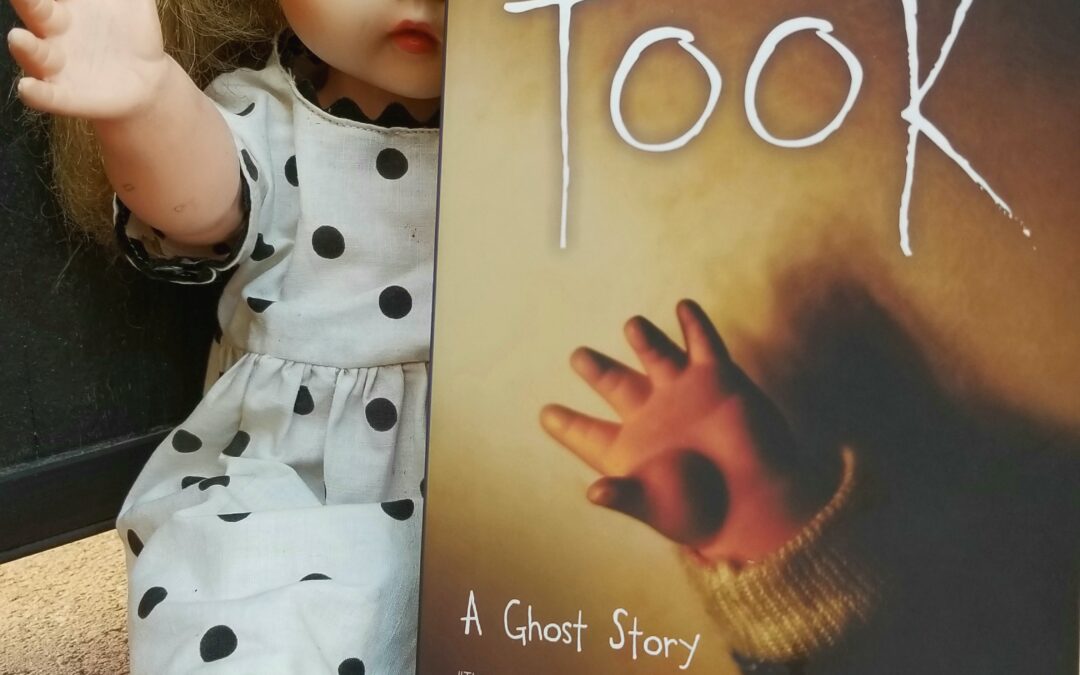 “Thirteen-year-old Daniel Anderson doesn’t believe Brody Mason’s crazy stories about the ghost witch who lives up on Brewster’s Hill with Bloody Bones, her man-eating razorback hog. He figures Brody’s probably just trying to scare him since he’s the new kid … a ‘stuck-up snot’ from Connecticut. But Daniel’s seven-year-old sister Erica has become more and more withdrawn, talking to her lookalike doll. When she disappears into the woods one day, he knows something is terribly wrong. Did the witch strike? Has Erica been ‘took’?” – Amazon

Daniel is a 13-year old boy. He lived in Connecticut with his family. His dad lost his job. As a result, the story opens with Daniel and his family moving to West Virginia due to the lower cost of living. Their new home in West Virginia is surrounded by acres and acres of woods. Immediately, Daniel’s sister, Erica, can hear a whisper coming from the woods calling her name. Daniel and Erica begin the new school year at their new school. The kids in Daniel’s class learn that he and his family have moved into the old Estes house.

They tell Daniel the legend of Old Auntie, a witch with special powers and her razorback wild boar named Bloody Bones. Legend has it that Old Auntie took Selene Estes, the little girl who previously lived in their home. Old Auntie keeps the girl for 50 years, releases them and then finds herself a new one. Daniel, of course, brushes it off as nonsense, but deep down inside – he’s worried all of their words might be true.

Meanwhile, his parents are fighting their own battles, Erica won’t stop talking to her doll, Little Erica, and they all but ignore Daniel and his tell tales from the school yard about a nearby witch. Predictably, Daniel’s sister, Erica is ‘took’ and it’s up to Daniel to stop Old Auntie and release her curse on Erica.

“But with the wind blowing and the moon sailing in and out of clouds like a ghost racing across the sky, I could almost believe I’d crossed a border into another world, where anything could be true—even conjure women and spells and monsters.”

I thoroughly enjoyed TOOK! I was unaware that the book is technically a YA book and the author, Mary Downing Hahn’s specialty. The book is incredibly descriptive which I loved. It wasn’t over the top though. She didn’t spend pages describing character’s clothing or the bark of a tree. It was vivid enough to paint a spooky atmosphere which set the tone throughout the book from start to finish. I remember 13-years old as a boy and the author captured everything that encompasses perfectly. I continued falling down this rabbit hole and finished this book quickly. It’s fairly obvious and predictable at times and I think that’s the case simply because of the grade school / junior high audience that she writes for in her books.

The story is told from Daniel’s perspective and the range of emotions this poor boy endures throughout the story is one I was capable of relating to even now as an adult. There were times I wanted MORE from the author perhaps as far as the history of Old Auntie or maybe a bit on the history of the town of Woodville that Daniel and his family now reside in. Obviously, the book would have been substantially longer and I’m guessing this is why she omitted a lot of those details.

I looked at Amazon and Goodreads reviews and a lot of parents chimed in to state this was, indeed, the first “real” book their child has ever read. I remember as a kid in school when a teacher tells you that you have to read a book, the first question typically asked is, “How many pages is it?” And 272-pages can seem daunting for any grade school child. The book has received tremendous applause, however, from children and parents alike and rightfully so.

Since the book takes place in the backwoods of West Virginia, the verbiage used throughout the book when Daniel and the schoolyard kids are interacting is obvious dialect for that region. The reason for the title of the book references the way the kids at school say that Old Auntie has ‘took’ another little girl. For some reason, their brains and mouths are unable to say the word ‘taken’ in the correct tense which drove me crazy after a little while. It wasn’t enough to stop reading and it’s obvious the author wanted us to know we were deep in the woods of West Virginia. OK, got it. Point taken. Apparently, everyone in the state of West Virginia uses verbs in whatever tense they damn well feel like and I guess we need to just go along with it. She beats that dead horse infinitely but perhaps as a child reading it, it may be funny and if it keeps a child reading then take, took, taking or taken ’til the cows come home. IDGAF. Read on, kids!

Occasionally, the book switches between the perspectives of Daniel and Old Auntie. Whenever we’re reading from Old Auntie’s point of view, the font changes to this super spooky font (the same one the title is written in on the front cover). I really liked this. I don’t know if perhaps this was a publishing stunt to make sure children knew we were now reading from Old Auntie’s perspective? Regardless, it added to the spooky aura of the book and it was a nice feature!

Despite my minor gripe with the author’s verb conjugation of ‘took’, I really enjoyed this book. It wasn’t until AFTER I finished it and was thumbing through some information on Goodreads that I discovered it was actually a YA book. That explained a lot of it. It was a solid 4-star read for me and one I’d recommend to parents, teachers. children and witches alike!