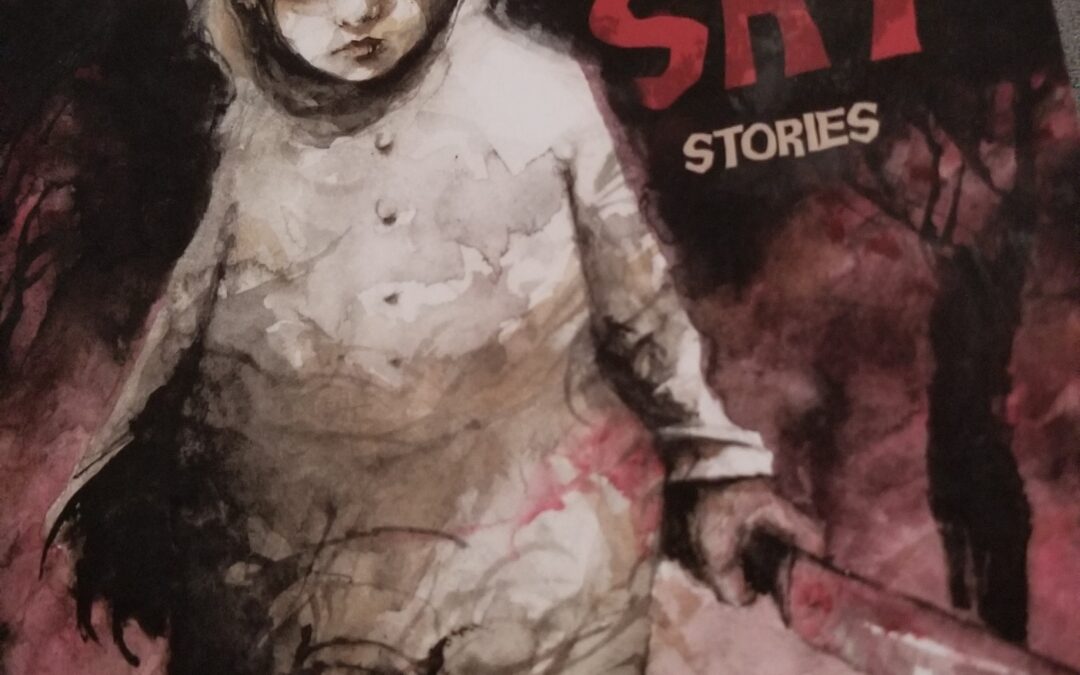 “Twenty unforgettable tales of horror and transgression from the award-winning author of KIND NEPENTHE.
Enter a disturbing dreamscape where your worst fears are illuminated and taboos are mockingly shattered.
In ‘Mine’ a child hangs precariously between the isthmus of innocence and evil, shedding his humanity for the altar of a wolf pup.
An ancient and terrifying legend reveals itself with startling modern twist in ‘A Dirty Winter Moon.’
‘Have a Heart’ teaches us that nature always prevails, sometimes in the most gruesome of ways.
In ‘Rumpelstiltskin’ the troll under the bridge is very real, and wants your children for unspeakable deeds.
In ‘The Gym Teacher’ a boy’s obsession with serial killers leads him to discover the true nature of a monster.
These twenty stories traverse the outskirts of society to reveal the brutality of humanity in all its gory glory.” – Amazon

UNDER ROTTING SKY is a collection of twenty short stories. I can’t write a review on all twenty stories nor would you want me to, right? …don’t answer that. I’m not writing twenty separate reviews on these stories. This damn book. This damn book and its writing and all these damn words. These stories were incredible. They were incredibly fucked up. They were the darkest shade of black one could imagine. They were soulless and evil. They were brilliant, but simultaneously had me scratching my head. “What in the hell did I just read?” was a popular question I asked myself after reading the last sentence at the end of each story. They’re not for the faint of heart and according to reviews I’ve read on both Goodreads and Amazon, even some hardcore horror aficionados complained about a few of the stories being too insensitive to some content. Despite the level of darkness of these stories, I thoroughly enjoyed them.

Quite a few notable standouts in this collection, including, “A Dirty Winter Moon”, “Joyride”, “Underground Fire”, “A New Man”, “Reckoning the Corn” and “Have A Heart”.

I wanted to take just a moment to tell you about one of my favorites called “A New Man”. The story opens with us learning that Bartholomew has used the internet to research everything possible on transorbital lobotomies. It was a simple procedure first performed in 1946 and can be performed with ease using a simple ice pick and hammer. He’s on his way home and gets his wife some flowers. The scene opens with her sitting on the sofa, staring at the television and drooling excessively. Her mouth is slightly open and she’s got that weird, blank stare. There have been so many before her until he perfected the procedure. He hated loneliness and isolation. He perfected it with his wife and now she belonged to him. Prior to that, he had attempted the transorbital lobotomy procedure on so many women after luring them in one way or another only to kill them accidentally. Once the body would begin to decay, he’d get lonely as he’d have to get rid of it. He’d set out to find another woman to practice on.

“He had been digging into the cerebellum. What he needed to be doing was severing the connections in the brain’s prefrontal lobe.”

I’m not a fan of short stories or anthologies. I’m just not, but these fucked up little stories superseded that opinion. I know a lot of people will say anthologies allow you to sample so many different writers! Short stories are a great way to sample an author’s writing without the commitment of an 800-page novel. All of that is true. I’d rather just plow along and focus my efforts and reading on one particular story, but UNDER ROTTING SKY surprised me in a good way.

These stories shook me the way several good horror stories should. There’s witches and wolves and shapeshifters and drug users and children and bizarre sexual missions and aliens and creatures and serial killers and all of it was just so strange. The stories bring your psyche to a place that’s completely uncomfortable. Even though certain paragraphs left me uneasy, I was eager to finish each story and the book, in general. In fact, at one point, I found myself reading too many stories at once and I purposely slowed down so I could enjoy it more.

There’s no doubt the stories are extreme, overall. I was disappointed to see so many so-called horror lovers on Amazon and Goodreads fault the writer and the book because of how extreme some of the stories were in this collection. Some actually said they were ‘triggered’ and turned off by some of the stories. If that’s the case, then you can’t possibly be a fan of the horror genre, can you? I mean, if you don’t like it, you don’t like it, but don’t sit there and say the stories were too extreme. For some reason, a lot of the negative comments really turned me off. I wouldn’t read a romance novel and then give it 1-star because there was too much romance.

Look at the cover of this book for crying out loud. The title is UNDER ROTTING SKY. You mean to tell me you picked this up expecting butterflies, sunshine and happy places? Don’t read a horror novel, give it a 1-star review and say it’s ‘too extreme’. Absolutely, it is extreme. There are several points that pushes you the brink of being uneasy, but isn’t that what good art and good writing is supposed to do? Kudos to Mr. Brockmeyer for every story he told in this collection. Quite a few of them made me disappointed they ended so soon. I wanted to stay and play in those scenes and those environments. Then the story would start wrapping up and voila! It was over. That’s basically why I don’t care for short story collections and anthologies. Trust me when I say that has nothing to do with UNDER ROTTING SKY. I absolutely LOVED this collection of short stories. It is simply my personal opinion on short stories, in general. I bought this one after seeing it shared on so many #bookstagram feeds on Instagram (thanks to those of you who shared this one!)

I’m beating a dead horse here at this point, but if you love horror, if you enjoy short stories, if you enjoy being pushed emotionally during your reading experience – I highly, highly, highly recommend UNDER ROTTING SKY. It is a beautiful, dark, terribly macabre collection of stories that will shake you. This is a solid 5-star read for me simply because of the way the stories resonated with me. I use that word a lot when I have the opportunity to read a book that I deem worthy of a 5-star rating simply because I don’t know how else to explain it. I often times put the book down to contemplate what I had just read. I thought about a couple of stories while sitting outside on my lunch break at work. One of the stories popped into my mind while driving to work. It’s a book that wreaked havoc on me (in a good way) and simply put, I loved it. This is a must-have for anyone with a solid horror collection!