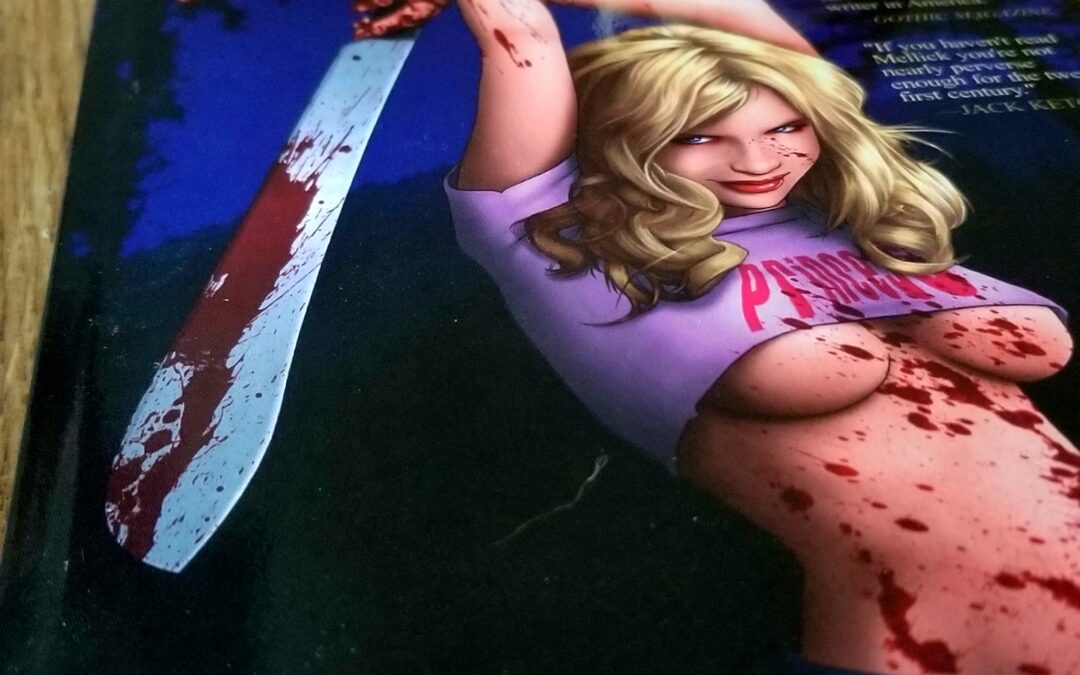 “Apeshit is Mellick’s love letter to the great and terrible B-horror movie genre. Six trendy teenagers (three cheerleaders and three football players) go to an isolated cabin in the mountains for a weekend of drinking, partying, and crazy sex, only to find themselves in the middle of a life and death struggle against a horribly mutated psychotic freak that just won’t stay dead. Mellick parodies this horror cliché and twists it into something deeper and stranger. It is the literary equivalent of a grindhouse film. It is a splatter punk’s wet dream. It is perhaps one of the most fucked up books ever written. If you are a fan of Takashi Miike, Evil Dead, early Peter Jackson, or Eurotrash horror, then you must read this book.” – Amazon

The book opens with a brief author’s note from Carlton Mellick III. He discusses the premise of APESHIT, how it started, how he got the idea and he said something in his note at the start of the book that really struck a chord with me: “I’m guessing people are going to accuse me of trying to be ‘shocking for the sake of being shocking’ with this book. More so than any of my previous books. But this couldn’t be farther from the truth.” The fact that the author needs to justify what he’s writing to the readers just really bothered me for some reason. I wasn’t bothered that he wrote it. I was more bothered by the fact that he feels like he has to justify his art to his readers and so-called fans. More on that later…

The story is a simple one involving six friends: Desdemona, Stephanie, Rick, Jason, Crystal and Kevin. Three young women who are the prettiest, most popular students in high school. Three young men who are the studliest (is that even a word?), most cocky jocks in the school. Jason’s grandfather left him his cabin out in the middle of nowhere high on a bluff. The group makes their way to Jason’s house, they pile in a van with music, food and enough alcohol for an army. With the van loaded, they head out on the interstate and venture to the middle of nowhere.

When they finally arrive at the cabin, the partying begins almost immediately. As night falls, Jason tells the group of a story his dad shared with him when he was much younger about a crazed killer in these woods. Things begin to go downhill for the group. All of the exterior lights are smashed on the cabin. Weird noises are coming from the woods surrounding the cabin and the killer makes his presence known. Only the killer isn’t an ordinary man, it’s a mutant of some kind that appears to be human but we quickly discover – it is far from human. It’s a fight for survival. Mutant vs. sex-crazed, completely inebriated, dumb ass teenagers. Carlton Mellick III makes his love for cheesy, B-grade slasher-type horror movies very well known and the entire book has that same kind of vibe.

“I’ve never tried to shock anyone with my work. I didn’t think anyone actually gets shocked by anything anymore. Chuck [Palahniuk] said that what some people view as interesting other people view as shocking. But shock fades with time. Eventually, people will see what is interesting about things that used to be shocking.”

If you read other reviews on Goodreads and Amazon, you’ll see I omitted a lot of gory details from my review above. I didn’t mention a lot of extremely fucked up things about this book and somehow, fucked up doesn’t even begin to do it justice. Rick, Desdemona and Kevin are in a threesome relationship. Rick is still a man, but decided he no longer wanted a penis and now has a vagina. Desdemona was the prettiest girl in school, but now has a mohawk and a strong obsession in covering her body with butterfly tattoos. Crystal has a bizarre abortion fetish. Since her and Jason are an item, he furnishes her with illegal abortion photos straight out of the Asian black market which they use together while having sex. And what basically means is they both sit around together and masturbate while looking at aborted fetuses. Stephanie has a bizarre medical condition called vagina dentata which means she has a row of teeth on the inside of her vagina. And if you think for one God damn second I’m going to Google that shit to see if it’s a real medical condition which will inevitably and completely fuck up the way I perceive the female anatomy from a guy’s perspective, you are sorely mistaken. If you want to Google it – have it at it. I’m trusting Carlton Mellick III. I also didn’t mention that the gore, blood and guts scattered throughout the book is equally graphic. I know. I know that’s a lot to take in. Step away. I’ll give you a minute to recover. |

I’ve said this in a couple of my reviews now and I shall say it again. The title of the book is APESHIT. The cover consists of a young woman covered in blood wielding a machete covered in blood with a crazed look on her face. Obviously, judging from the tile and cover art, we can deduct the book isn’t going to be about puppies, kittens and happy endings, right? Hopefully, you didn’t either. Apparently, there are a few 1, 2 and 3-star reviewers who thought the book was a bit much and seemed to be blatantly offended.

I’ll be the very first person to admit that the book is over-the-top. In fact, everything about it is over-the-top. The cover art, the story, the gratuitous sex, violence, gore, the teeth wedged in the vagina, hell, even the title is over-the-top (APESHIT, really?!) It was all over-the-top. It was so over-the-top and so strange, yet fun in a very weird, I-love-horror kinda way that I’m giving it a 4-star review. Obviously, it wasn’t perfect for me but I don’t think it was meant to be. A lot of it was tongue-in-cheek and even Carlton Mellick III himself says that it’s a full-blown parody of the splatterpunk, low budget horror movies that he loved growing up.

As an artist myself and someone who loves art, I felt sad that Carlton Mellick III actually felt like he had to defend this work of art in the author’s note he wrote at the beginning of the book. The fact that he has to tell everyone how fucked up this book is and how acutely aware he is of that fact just upset me and saddened me a little. I think as an artist, we want acceptance. We would love it if everyone everywhere loved every piece we put out, but obviously, that’s not realistic. Now is a good time to state for the official record, please don’t read a horror novel and give it a shitty review because the words you read were too fucked up for you to handle and/or comprehend. It seems like such a huge disservice to the writer. If you thought the writing sucked, fine. If you felt like it was written by a 5-year old, fine. But don’t give it a 1-star review because it was way too disgusting with too much gore and too much sex. As a fellow book reviewer, I just can’t wrap my mind around that. I wouldn’t read a romance novel and then give it a 1-star review because there was too much romance.

All of that ranting and raving aside, I did enjoy this book despite how incredibly crazy it was. It was a really fast read at less than 200 pages in length. There’s six chapters in the book and each chapter represents one of the six teens giving us a little information on their background and who they are. I’m super glad I added this one to my October list because it was extremely fitting! It’s disgusting, gory and more fucked up than I care to even try and convey to all of you, but you know what? Reading is entertainment. I had a rough couple of days at work this week and it was amazing to get immersed in such a messed up world far away from the cubicle where I spend most of my hours during the day. You damn right I was entertained! I was immersed in a world somewhere deep in the woods with six very twisted individuals trying to battle a mutant from God-knows-where. I realize my choice in literature isn’t everyone’s cup of tea. I accept that. I don’t expect everyone to run out and invest in Carlton Mellick’s library, BUT if you enjoy the horror genre and want an incredibly twisted, graphic story – this would be a good one to check out!