As Gouda as Dead by Avery Aames : Book Review by Kim 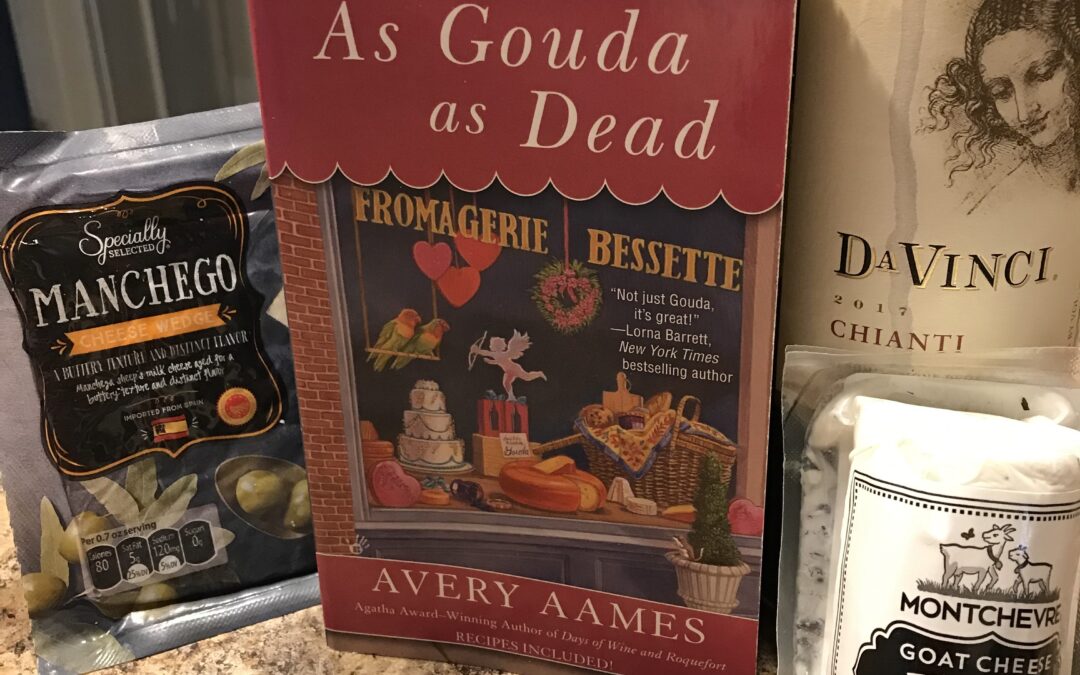 “Providence, Ohio, is celebrating Valentine’s Day with weeklong events, including lovers’ baskets with heart-shaped cheeses at Fromagerie Bessette. Charlotte Bessette is celebrating by finally walking down the aisle with the man of her dreams, handsome artisanal cheese farmer, Jordan Pace. But when a beloved bar owner is discovered murdered on Jordan’s farm, he believes they should reschedule their wedding given the grim turn of events.
_ _
Charlotte is heartsick over the postponement. This killer crossed the wrong woman. No one, but no one, is ruining her wedding plans!” – Amazon

I read Final Sentence by Daryl Wood Gerber (Avery Aames is her pen name) which is the first book in her Cookbook Nook Mystery series and really enjoyed it. So when I won a copy from Gerber off of Facebook, I was excited to give another one of her cozy mystery series a try.

The Cheese Shop Mystery series takes place in Ohio, which is in the midwest. And it revolves around a cheese shop that has a wine annex in the basement. It’s like Gerber peered into my brain to find out what things would entice me.

The way Gerber described her characters and the town it was like I was catching up with my own neighbors and the shop owners where I live. But I wish our city did up Valentine’s Day like they do in her book! It was a week long event filled with fashion shows, food and wine tastings, and a romantic play. Once again, all are things that I enjoy.

As Gouda as Dead is book six in the series, but even having not read the previous books Gerber wrote enough background information that I was never questioning what was happening. There were a few nods to previous books that just made me wish I had started the series from the beginning, but it didn’t take away from this book at all.

I enjoyed that Charlotte’s friends helped her with investigating. Her finance, Jordan, and the chief didn’t always like that she was questioning people, but they weren’t jerks about it. Which is refreshing. I find it tiresome when the police continue to hinder the main character’s snooping! For the first few books it’s fine, but I enjoy when they start working together a bit.

If you haven’t read any books in the Cheese Shop Mystery series, I suggest you start with the first one, The Long Quiche Goodbye, just so you don’t miss any of the fun.

Besides the Cheese Shop and Cookbook Nook Mysteries, Gerber also has another cozy series, The French Bistro Mysteries, with A Deadly Eclair being the first book in the series. And a suspense series, Aspen Adams, with the first book titled Desolate Shores.