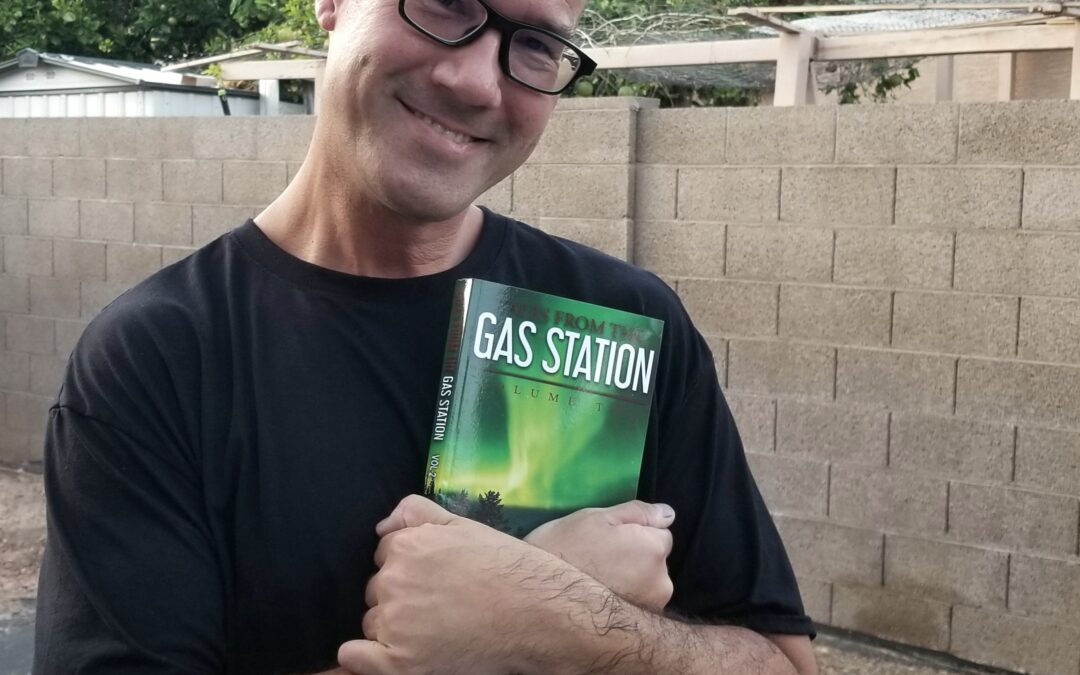 “Nightshift clerk and high-functioning insomniac Jack is back to work, trying his best to keep out of trouble. But when his chain-smoking coworker discovers a mysterious radio signal revealing the guarded secrets of their town, Jack will learn that an annoying new dayshift manager is far from the worst of his problems.
_ _
In this second installment of the Gas Station saga, Jack finds himself entangled in his most harrowing adventure yet. With the newest crew of coworkers along for the ride and the resident psychopath out for his blood, our hero(?) must navigate the drama of small-town murder conspiracies, vigilante justice, and demonic summoning rituals…whether he wants to or not.” – Amazon

Gas Station Jack is back, better and way more sarcastic than ever. Hooray! The adventure picks up similarly to where volume one left off. Our hero is continuing to battle his fatal diagnosis of a rare insomnia that will one day consume his existence. In addition to hardly being able to sleep a wink, he’s still working at the shitty gas station at the edge of town as a full-time employee. His new crisis is the day shift manager who takes his job waaaaaaaaaay too seriously. You know the kind of person I’m talking about, right? The kind of person who you know is working a shitty job at a shitty gas station at the edge of town, but somehow acts like they’re curing cancer. Yeah, that kind. In addition to the new day shift manager that is driving Jack absolutely crazy, he’s also training new employees (I hate that shit!) while trying to focus on the next book he’s reading while also battling the demon that’s taken refuge on the roof of the gas station. And in addition to alllllllllll of that, Jack is doing his best to exist in the world just like you and I. He’s a regular guy with some not so regular adventures.

“As far as last words go, ‘Fuck you, I need to take a piss’ are probably not the ones you want carved into your tombstone.”

It’s no secret at all that I love this series. I was smitten with volume one the moment I devoured that story. I pre-ordered volume two the moment that Gas Station Jack announced on Instagram that he would be available. Not only would it be available for pre-order, but he was going to autograph a handful of advance copies for a few lucky recipients. Yours truly snagged a copy so be jealous. Enough about autographs and jealousy, I don’t know how to wrap my head around this book review. I don’t go into spoilers in my reviews and therefore, telling you ANYTHING about this book is really difficult. That’s not a cop out. That’s the truth.

I went to Goodreads and Amazon and looked at other reviews. Not only does the book have nothing but 4 and 5-star reviews, but the reviews are so cryptic! And that’s basically how my review is going to be, as well. You know how some books have a very clear beginning, middle, and end? TALES FROM THE GAS STATION isn’t quite like that. It just sort of plunges you right into the deep end and either you’re going to commit to this adventure or you need to get off this ride and try something else. I’m trying my best to explain this and maybe I’m failing miserably. My point is the book review is a challenging one for this series. That’s not a bad thing at all, it just means you need to take my word for it. I would recommend you pick up volume one before tackling volume two. I think Gas Station Jack does a pretty good job in recapping things from volume one, but it would be sooooo much better if you just read volume one before you started volume two. I mean, that just makes sense, right?

I don’t know if I’ve ever truly identified with any fictional character from a movie or book before in my entire life as I do Gas Station Jack. He’s sarcastic, he’s witty, he’s nonchalant, he’s lackadaisical, but he’s intelligent. He’s introverted, he wants to read his book, he doesn’t want to be bothered with bullshit and training employees and he simply wants to get through the day just like the rest of us. I said something similar in volume one and the same goes for volume two.

The writing is so matter-of-fact and so in your face that I wanted to plow through it in one sitting, but I didn’t. I took my time. I took all of it in slowly and I enjoyed every tasty morsel of it. I laughed out loud (several times) and one time in particular I actually had tears in my eyes from laughing so hard! Maybe I was delirious from a long day at work, but there were a few parts that had me in stitches. Since I identified so well with Gas Station Jack, the highs had me laughing and smiling and the lows had me sulky and melancholy. The true sign of an awesome book as far as I’m concerned. In other news, I hope at some point in time there is a volume three released because if the story is left like this, a little piece of my soul will die.

I really don’t want to keep gushing on and on about how much I adore the characters in this series. I could keep going on about the style of writing and how much it flowed so effortlessly. I could go on about the world that has been invented in this series and how it seems so gigantic and yet so isolated at the same time. I’m going to end this review by stating one simple fact and that is any book that features a demon, a bizarre radio and a cameo appearance by Donald Glover a.k.a. Childish Gambino is an instantaneous 5-star read for me.

I know what you’re thinking because right now, I’m thinking about it, too. If it was so amazing, Scott – why can’t you give us more? You’d have to pick up TALES FROM THE GAS STATION to see what I mean. Highly recommended!!

p.s. the photo looks corny because I was tagged in the #ihugbooks challenge on Instagram and decided to use it as my book review photo. Since I adore the series so much, it only makes sense that I show a photo of me hugging this book.