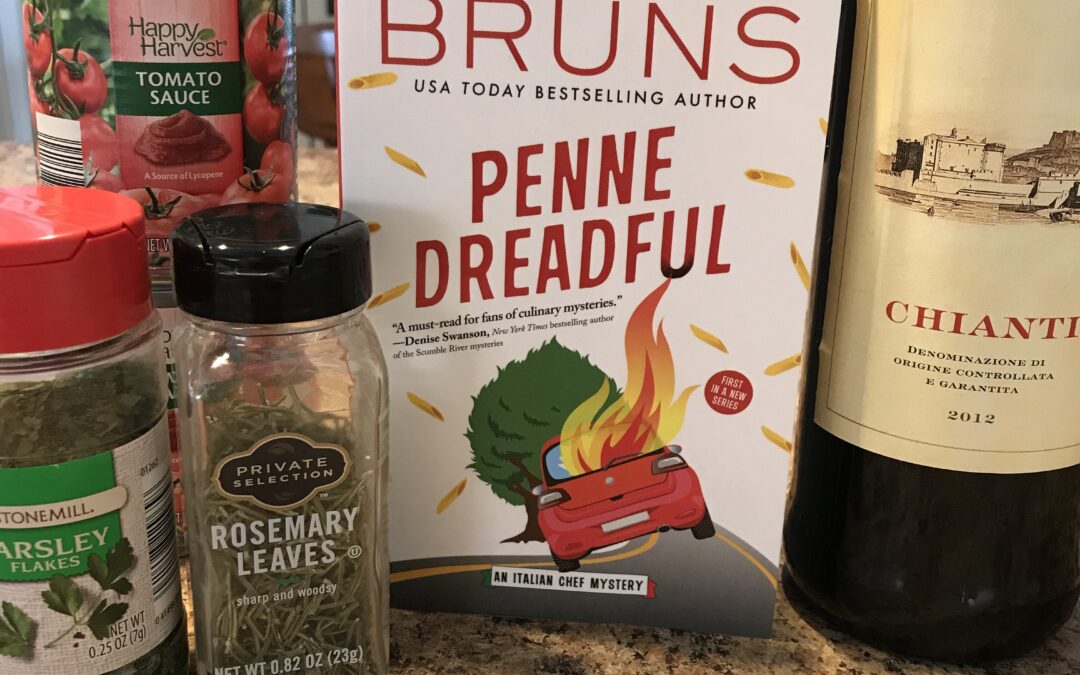 “Local chef Tessa Esposito is struggling to get back on her feet following her husband’s fatal accident. And when the police knock on Tessa’s door, things just get worse. They’ve discovered Dylan’s death wasn’t an accident after all, and they need Tessa to start filling in the blanks. Who would want her beloved husband dead, and why?
_ _
With the investigation running cold, Tessa decides it’s time to save her sanity by reconnecting with her first love-cooking. And maybe the best way back into the kitchen is to infiltrate Dylan’s favorite local pizza parlor, which also happens to be the last place he was seen before he died. But the anchovies aren’t the only thing that stink inside the small family business, and with suspects around every corner, Tessa finds that her husband’s many secrets might land her in hot water.” – Amazon

Penne Dreadful by Catherine Bruns is the first in the Italian Chef Mysteries and the first cozy I’ve read by her. Although I’ve been eyeing up the Cookies and Chance Mysteries for awhile now…. one day!

The first thing I noticed when I opened the paperback was the line spacing on the page, which was double the usual paperback. This made me extremely happy! Just recently, I’ve noticed if I read a paperback I have to have very good light and it helps to sit by the window during the daytime. The words are just so tiny to my getting older eyes. But that was not the case with Penne Dreadful because of the extra spacing. That is just an extra bonus, but it inspires me to buy more books by Poisoned Pen Press.

Bruns did a wonderful job with character development for the first book in a new series. There were a lot of characters, but at no time did I get confused, which has happened in the past when a book has a ton of characters or the character’s names that all seem to start with the same first letter. I really enjoyed the relationship Tessa had with her cousins and look forward to visiting with them in the next book. And of course, the kitty, Luigi is adorable.

And Bruns descriptions for the restaurant, Tessa’s house, and the neighborhood was done very well. The perfect amount to make me feel like I could visualize the scene, but not so much that I became bored and started skimming.

Besides the murder there were other crimes to solve, including fraud and blackmail. This was highly enjoyable having so many things to figure out. I had the general idea of who the bad guys were, but didn’t see it all coming, and was really surprised by one of the characters turning out to be a decent person.

I will be reading more of the Italian Chef Mysteries, and highly recommend Penne Dreadful.