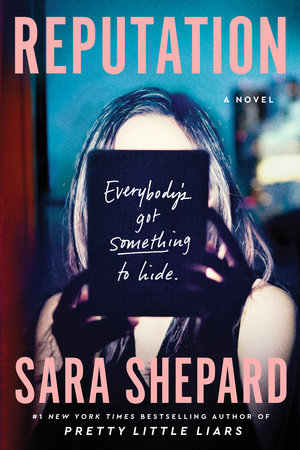 “Aldrich University is rocked to its core when a hacker dumps 40,000 people’s e-mails—the entire faculty, staff, students, alums—onto an easily searchable database. Rumors and affairs immediately leak, but things turn explosive when Kit Manning’s handsome husband, Dr. Greg Strasser, is found murdered. Kit’s sister, Willa, returns for the funeral, setting foot in a hometown she fled fifteen years ago, after a night she wishes she could forget. As an investigative reporter, Willa knows something isn’t right about the night Greg was killed, and she’s determined to find the truth. What she doesn’t expect is that everyone has something to hide. And with a killer on the loose, Willa and Kit must figure out who killed Greg before someone else is murdered.
_ _
Told from multiple points of view, Reputation is full of twists, turns, and shocking reveals. It’s a story of intrigue, sabotage, and the secrets we keep—and how far we go to keep them hidden. Number one bestseller Sara Shepard is at the top of her game in this brand-new adult novel.” – Amazon

Reputation by Sara Shepard (yes, that Sara Shepard, author of the Pretty Little Liars and The Lying Game, along with a bunch of other YA novels) is her third adult novel. I haven’t read any of those, but I did enjoy watching Pretty Little Liars. All that drama, mystery, and fashion kept me entertained week after week.

Reputation is a fast paced mystery with lots of drama and a touch of suspense. And by suspense, I mean, the various characters kept repeating, almost as an afterthought, “There’s a killer still on the loose.” At no time was I feeling like the killer would strike again and I don’t really thought the characters felt that way either. They were more concerned about what dark secrets from their emails might come spilling out into the world.

I did enjoy the emails for Aldrich University, along with some other well known universities, getting hacked and put up on a server for all to see. I felt like it was very relevant to today’s society and it added an extra layer to the storyline.

There were some twists, but the only one that surprised me, although I wasn’t even really concerned about who made it happen, was in regards to the leaked emails. I was 40% into Reputation when I texted my podcast partner for Books Don’t Review Themselves, and told her what I thought about two main things that had happened. And although I was wrong in regards to who did one of the things, I did get the killer correct and I already knew the reason. Even with knowing the killer so early on it was still enjoyable reading the rest of the book since a new secret seemed to come out every other chapter.

If you enjoy Sara Shepard’s books, especially the Pretty Little Liars series, you’ll want to give this one a read.