When the Lights Go Out by Mary Kubica : Book Review by Scott 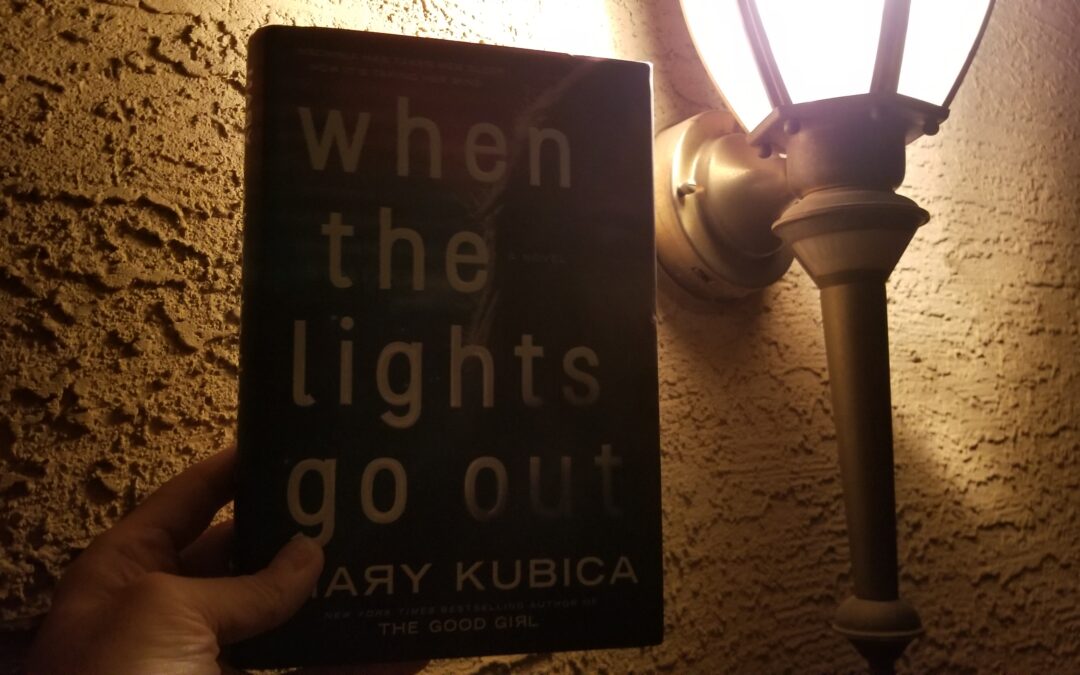 “Jessie Sloane is on the path to rebuilding her life after years of caring for her ailing mother. She rents a new apartment and applies for college. But when the college informs her that her social security number has raised a red flag, Jessie discovers a shocking detail that causes her to doubt everything she’s ever known.
_ _
Finding herself suddenly at the center of a bizarre mystery, Jessie tumbles down a rabbit hole, which is only exacerbated by grief and a relentless lack of sleep. As days pass and the insomnia worsens, it plays with Jessie’s mind. Her judgment is blurred, her thoughts are hampered by fatigue. Jessie begins to see things until she can no longer tell the difference between what’s real and what she’s only imagined.
_ _
Meanwhile, twenty years earlier and two hundred and fifty miles away, another woman’s split-second decision may hold the key to Jessie’s secret past. Has Jessie’s whole life been a lie or have her delusions gotten the best of her?” – Amazon

Jessie Sloane is in a hospital room watching her mother die of cancer. While her mother fights for her life, Jessie fights for the ability to sleep due to a severe case of insomnia. With the assistance of a nurse on call, she assists by giving Jessie a prescription to help her sleep. It helped her so well, she slept deeply while her mother passed away and the insomnia inevitably returns with a vengeance. After the passing of her mother, Jessie takes care of the necessary business. She sells her mother’s home, she rents a carriage house for herself and she applies for college. Jessie soon learns from the college admissions office that her social security number has been flagged. It seems that the individual that corresponds to her social security number died quite some time ago. Jessie does some research of her own and begins completing the puzzle of her life while filling in the numerous missing pieces. With the story alternating between Jessie in present time and another woman named Eden some 20-years prior, the story is a pendulum of twists and turns with Jessie fighting to discover the mystery of her identity.

“The cancer, it’s hereditary. Some aberrant gene that runs through our family line, red pegs lined up in my battleship already. Like Mom and her mom before her, it’s only a matter of time before I too will sink.”

I had a few issues with WHEN THE LIGHTS GO OUT. First, the alternating story between Jessie and Eden. The flashbacks. The flash forwards. The flashbacks. The flash forwards. I really felt like it took away from the storyline. Once I started identifying and empathizing with Jessie, we’d get flashed backwards to Eden. More than halfway through the book, I grew exhausted of this. I never felt like I could really make any connection with either of the main characters because I was too busy being flashed back and forwards to have an opportunity to develop any feelings towards either of these characters. Very frustrating, indeed. The format just drove me insane.

Next, Eden is desperate for a child of her own. Desperate doesn’t even begin to describe it because she’s at the point where she’s become obsessed with the idea of having a baby. This goes on and on and on and one. Paragraphs and paragraphs and pages and pages. Before I know it, I’m more than halfway through the book with this woman talking non-stop about how she needs a baby in her life. I mean, for fuck sake – it’s non-stop talk about semen and eggs and vaginas and penises and fertility treatments and crowning and the incessant need to start pushing and eeeeeew! Gross! I thought this was supposed to be a “psychological thriller”? The only thing thrilling about this book was the amount of times the author typed the word “baby”. If I wanted to read a book about the obsession of pregnancy and reproduction, I’d buy a text book on obstetrics. Eeeew! Gross! (no offense to my fellow #bookstagram friends who adore kids or have children of your own. I’m certain they’re quite lovely, but not for me.)

The twists and turns were predictable. All of the major ones outlined in the book I had figured out well before I got to those parts which was also disappointing. The ending? OMG. Noooooooooooooooo! I actually chucked the book across the room, it hit the bedroom wall and I screamed out a combination of obscenities that went on for several minutes. It was horrible in every way imaginable. I’m frustrated partly because I really liked certain aspects of this book. It was original and parts of it did grip me. When I wasn’t being thrust backwards in a time machine to Eden’s story 20 years in the past, I did feel for Jessie. The emotion was raw and I genuinely felt bad for some of the things she was having to endure. I read the synopsis and yes, this is, indeed, a book that I would have liked to read which is why it ended up on my TBR. I really wish there were more creepy aspects to the story and I wanted more atmospheric scary things to be going on. The parts that were present in the book just fell very short of making its mark. I don’t know who found any of this book scary or chilling, but when I wasn’t frustrated, I was bored stiff.

I don’t see how I could possibly give the book anymore than 2-stars. I don’t want to beat a dead horse here because as I mentioned, part of the book was enjoyable. I liked certain aspects, but the rest of it just overshadowed those glimpses of the things I did like. WHEN THE LIGHTS GO OUT received numerous mixed reviews which was quite shocking. To be fair, I noticed the readers who gave the book 4/5 stars were fan boys & girls of Mary Kubica. This was the first novel of hers that I have read. Unfortunately, I was not impressed but who knows?! If your TBR list is empty and you have absolutely nothing else to read, your house is clean, the laundry is done and your errands are finished, perhaps you’d enjoy this title. It isn’t one I’d personally recommend so I am onto the next one!