Read and Buried by Eva Gates : Book Review by Kim 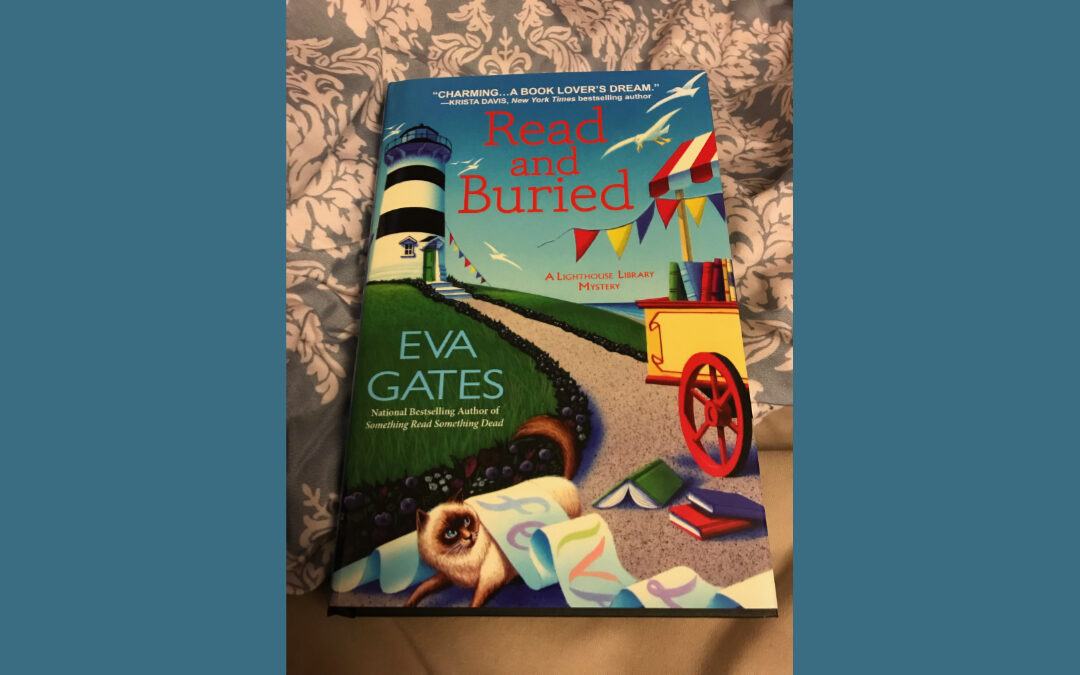 “The Bodie Island Lighthouse Library Classic Novel Book Club is reading Journey to the Center of the Earth by Jules Verne while workers dig into the earth to repair the Lighthouse Library’s foundations. The digging halts when Lucy pulls a battered tin box containing a Civil War-era diary from the pit. Tucked inside is a hand-drawn map of the Outer Banks accompanied by a page written in an indecipherable code.
_ _
The library is overrun by people clamoring to see the artifact. Later that night, Lucy and Connor McNeil find the body of historical society member Jeremy Hughes inside the library. Clearly Jeremy was not the only one who broke into the library–the map and the coded page are missing.
_ _
Lucy’s nemesis, Louise Jane McKaughnan, confesses to entering the library after closing to sneak a peek but denies seeing Jeremy–or his killer. When Lucy discovers that fellow-librarian Charlene had a past with Jeremy, she’s forced to do what she vowed not to do–get involved in the case. Meanwhile, the entire library staff and community become obsessed with trying to decode the page. But when the library has a second break in, it becomes clear that someone is determined to solve that code.” – Amazon

Reading the synopsis I thought I would love this book. I love libraries and worked at one for over 14 years, I’ve always wanted to live in a lighthouse, I always wanted out library to have a library cat, and who doesn’t want to find a treasure map that could lead to buried treasure?!?

I just couldn’t get into it. It flowed well, there were plenty of suspects to keep the reader guessing, and I really enjoyed Louise Jane (especially towards the end of the book… although I can see how she would get annoying if she’s so antagonistic in every book), but the rest of the characters were just… fine. None of them had me wanting to become their friend or sympathizing with them. And Lucy was just kind of there. She wasn’t that engaging and she just drifted from scene to scene, not even really investigating. The other characters would just tell her things and she was just there when things happened.

There was so much potential with the treasure map. I wanted at least a little bit of running around town trying to find the treasure. What they did find was interesting, although if you pay an ounce of attention to the story, you know what they are going to find. The treasure will add some drama for future books, but really didn’t do much for Read and Buried.

I know a lot of people enjoy the Lighthouse Library Mystery series, and the various books were checked out from the library often, so maybe this one was just a bit of a clunker…. If you do want to try the series (and you should!) start with book one, By Book or By Crook.