Don’t Forget Me by B.C. Schiller : Book Review by Kim 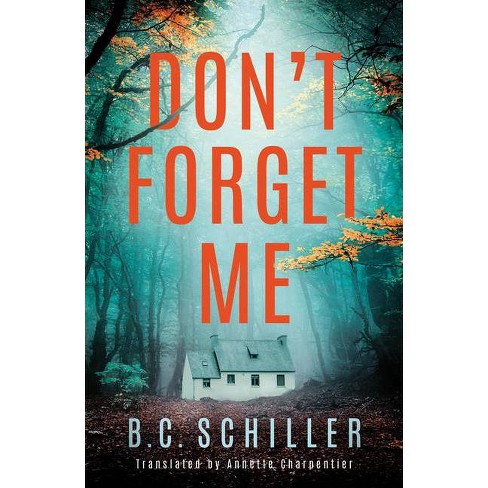 “It’s five years since psychiatrist Olivia Hofmann’s husband and daughter vanished without trace, and five years since the body of troubled teenager Lisa Manz was found murdered in a quarry outside Vienna.

While the trail of Lisa’s killer has gone cold, Olivia receives an anonymous postcard each year on the anniversary of her family’s disappearance. Who is sending the messages, and why are they sorry? When one of her patients claims he has seen Lisa alive, Olivia joins forces with detective Levi Kant, who was taken off the murder case when he was close to finding answers. Is it possible Lisa is still alive? And is there a connection with Olivia’s missing loved ones?

But reopening the cold case will put Olivia and Levi in mortal danger: the killer is onto them and will stop at nothing to remain in the shadows. Can they bring the truth to light before they are silenced forever?” – Amazon

My podcast partner for Books Don’t Review Themselves, Jessica and I both read Don’t Forget Me by B.C. Schiller, and I ended up giving it two stars where as she ended up giving it four. I thought that was very interesting that we were so far apart on this one. She knew it was only a little over 200 pages to begin with, so she realized it wasn’t going to go too in depth into anything. And she also saw it more as like an episode of SUV, with everything fitting in perfectly between the commercial breaks. When you think about it in regards to a TV show I can see people enjoying this book, but there were too many things that put me off.

I know this is a translated book from German, but I feel like a lot of times if a book doesn’t get good acclaim, translators get the brunt of the reasons why it wasn’t a good book. And I don’t feel like that was the case in this story. I know German can be a very harsh sounding language and Germans are often portrayed as not very emotional people, and this book definitely came across that way. It’s fine if some of the characters are that way, but almost every single character was or else they really didn’t have any emotion at all. The main character’s husband and daughter are missing. and it’s just like it was a side note in the story or something written in the synopsis to draw the reader in. She was not emotional about this at all, which I mean some people aren’t, but I thought that was very strange. I could not sympathize with any of the characters and that makes it really hard for me to enjoy a book.

The other thing that I didn’t necessarily enjoy is when you read the synopsis, it starts out; five cards, five messages, five years. And it goes on to read like she is going to be finding what happened to her family because it may be related to the killing in Don’t Forget Me. So I’m thinking that the book is more about that, and besides her getting the card at the beginning of the book, it’s only talked about very briefly towards the end of the book. And to me, to have a synopsis talking about one thing and then have the book barely be about that at all does not endear me to it.

Another thing that stood out was the dialogue. It was very flat and one dimensional. There was no depth behind it, and it often felt awkward. And the final thing that got me with this book was that I felt like the authors/editor/publisher/someone realized this wasn’t the best book but they figured if they just but in a bunch of outrageous and disturbing things in the reader would overlook everything else and consider this a thrilling book. And the amusing thing is I enjoy outrageous and disturbing in a story… if it’s done well.

This is the first book in the series and the way Don’t Forget Me ends in a cliffhanger, you know that in the next book they will (hopefully) be focusing on why the husband and daughter went missing. But for me, at that point it was too little, too late. If someone whose opinion I trust were to read more by them and recommended it, I might give one of their books another chance, but I won’t be in a hurry to try any of their other books otherwise.