The Chain by Adrian McKinty : Book Review by Kim 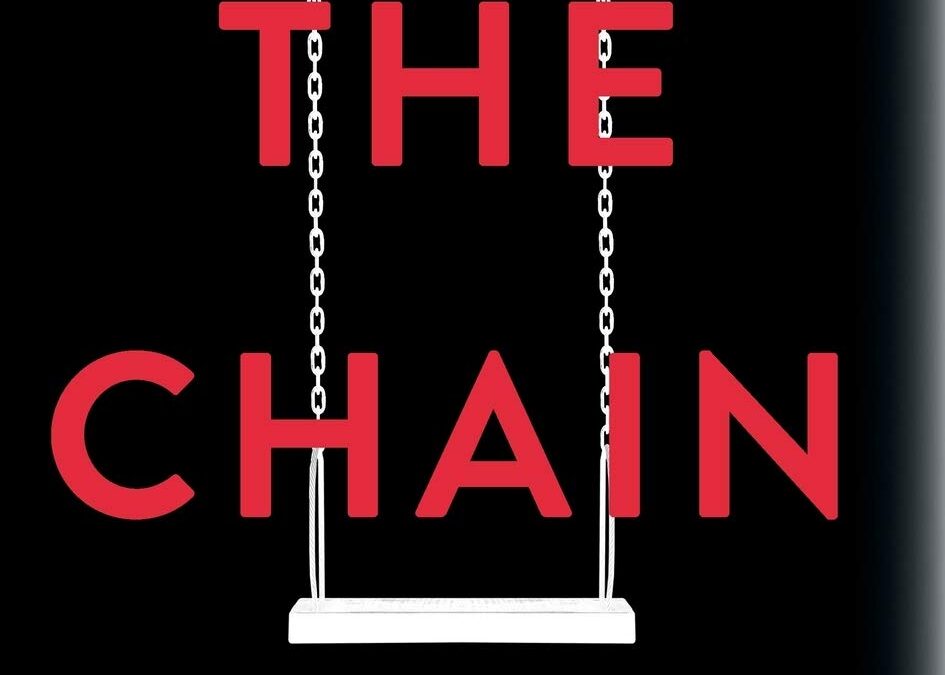 “YOUR PHONE RINGS.
_ _
A STRANGER HAS KIDNAPPED YOUR CHILD.
_ _
TO FREE THEM YOU MUST ABDUCT SOMEONE ELSE’S CHILD.
_ _
YOUR CHILD WILL BE RELEASED WHEN YOUR VICTIM’S PARENTS KIDNAP ANOTHER CHILD.
_ _
IF ANY OF THESE THINGS DON’T HAPPEN:
YOUR CHILD WILL BE KILLED.
YOU ARE NOW PART OF THE CHAIN
VICTIM.
SURVIVOR.
ABDUCTOR.
CRIMINAL.
YOU WILL BECOME EACH ONE.” – Amazon

I was intrigued by the concept of The Chain. At first it’s a standard kidnapping, your child gets kidnapped and you have to pay some ransom money But that’s pretty much where it stops being normal. You also have to kidnap a child and then the people before you who have your child, have to make sure that you pay the money and that you kidnapped a child before they can get their child back. The other thing that I thought was insane about it is once you get your child back you’re not out of The Chain. If someone five families down The Chain goes to the police or talks to reporters then there’s still a risk of blowback and they could kill your whole family.

Also once you’re in The Chain, you’re in it for life. Five years down the road you could be contacted and told that you need to go deliver a message to someone, either verbal or physical. In the book, Rachel, the main character, ends up getting punched in the stomach by some guy who just randomly comes up to her, but The Chain had contacted him and told him to go do it.

There are two parts to the book, and the first party was truly thrilling to me. I don’t have children, but I felt horrified. So I can only imagine how parents would feel. The story moved quickly and it was well written. You could feel the emotion from all the characters. When the first section of the book ended, it could have ended there and I would have enjoyed it. You’re still not sure who the main people behind The Chain were and you still have questions, but I would have been fine with that because it would be even more horrifying not having closure.

Although I didn’t feel the second part of the book was necessary, I did find it interesting how McKinty wrote about the trauma of all of those involved. Rachel’s daughter starts wetting the bed and withdrawing from people. She can’t talk to anyone about it because you’re not supposed to mention anything about The Chain to anyone. Ever. And if she talks to a therapist, they could have been part of The Chain or one of the people who run The Chain, and she would put her whole family, as well as other families in danger of being killed. And then there’s the fact that this girl’s mom had kidnapped another child and the daughter empathizes with the kid because she herself was kidnapped and she knows the terror that she went through. Then to have to face your mom who traumatized another kid, even though you know she did it for you, would have to fill the person with guilt and anger.

The other part that I liked was how McKinty showed how social media is ripe for the picking when it comes to kidnapping children or doing other bad things. People are constantly checking in on social media and you know when the parents aren’t home yet. Very eye opening.

The reason why I gave it four stars instead of five, like I said before if he would have just stopped it after the first part and left me with questions, I would have been fine with that and I think I would have enjoyed it more. But the second part of the book kind of turns into a Hollywood ending. We find out who the people are behind The Chain, including their backstory and the horrific things that happened to them as a child. But to me, I would have been fine not knowing about this. The way that these common people find out who these super smart hacker people are, it was fine. And it was realistic enough, but I didn’t feel like it needed to be there.

And then the very ending of the book was a shoot ‘em up typical ending that you’d see in the movie theater. And for a lot of people they may really enjoy that and find it very fun, but I felt it took away from the horror of the story. But even with that, I would still say definitely read this book. Let me know what you thought. If you enjoyed the whole thing and if you thought the second part of the book really enhanced it. Or if you would have been fine with McKinty ending the book after the first part. I’m interested in knowing, and I will definitely read more books by McKinty.