Once a Liar by A.F. Brady : Book Review by Scott 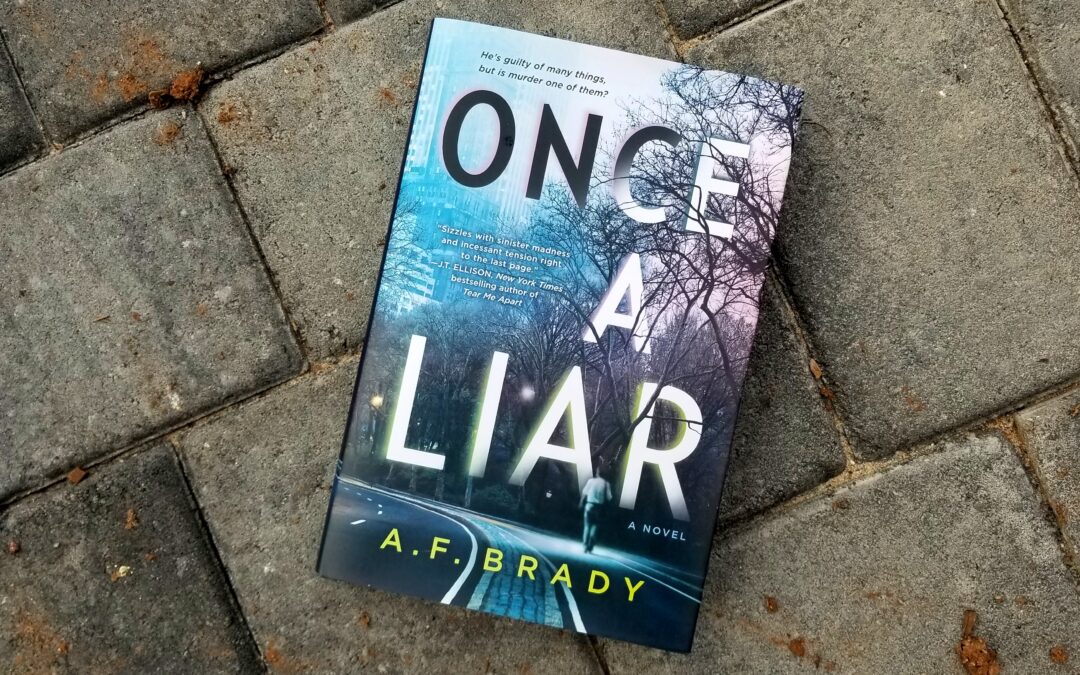 “Peter Caine, a cutthroat Manhattan defense attorney, worked ruthlessly to become the best at his job. On the surface, he is charming and handsome, but inside he is cold and heartless. He fights without remorse to acquit murderers, pedophiles and rapists.
_ _
When Charlie Doyle, the daughter of the Manhattan DA—and Peter’s former lover—is murdered, Peter’s world is quickly sent into a tailspin. He becomes the prime suspect as the DA, a professional enemy of Peter’s, embarks on a witch hunt to avenge his daughter’s death, stopping at nothing to ensure Peter is found guilty of the murder.
_ _
In the challenge of his career and his life, Peter races against the clock to prove his innocence. As the evidence mounts against him, he’s forced to begin unraveling his own dark web of lies and confront the sins of his past. But the truth of who killed Charlie Doyle is more twisted and sinister than anyone could have imagined…” – Amazon

So there’s two alternating timelines throughout this book: THEN and NOW. The story is told from the perspective of Peter Caine, a highly successful attorney. Before I go on, let me preface this review by stating that I couldn’t stand this smug bastard. If I may be so bold and perhaps even a little bit personal, this douchebag reminded me so much of my own father (who I no longer have a relationship with for varying personal reasons). Reading this story from Peter’s point of view just really rubbed me the wrong way the entire time from start to finish. He’s a narcissistic, sociopath who adores the sound of his own voice and it was a difficult book for me to read. He disregarded his own son during every opportunity presented to him, he lied, cheated and berated both his first and second wives. He would ultimately do anything to But enough about my family drama…

As I mentioned previously, the story is told from Peter’s point of view alternating between two separate timelines. The “THEN” showcases Peter with his first wife, Juliette, who is dying. Peter in the interim is clawing his way to the top of the food chain at the law firm where he works. Additionally, he forms a love affair with another woman which is also the result of him divorcing Juliette. The “NOW” focuses on Peter’s marriage with his second wife, his son and the murder case of his former mistress.

After being brutally stabbed to death, Peter quickly becomes a person of interest in her murder. This part of the timeline goes into more detail about the relationship with his son, his current wife and of course, how he intends to beat the fact that he’s a murder suspect.

The story is full of twists and turns, albeit, most of them are quite predictable. The main issue that I had was the terribly slow pace that this book tends to move. It’s page after page after page of Peter listening to himself talk and how he’s the most brilliant, charming man on the face of the planet and we should all be so thankful he’s graces us with his presence. The ending shows up, it lasts about 7 pages and then that’s it – the book is finished. I felt completely unsatisfied. I didn’t hate this book, but in my opinion, it was simply OK. I didn’t hate it. I didn’t particularly enjoy it. There’s really no likelihood of me reading it ever again. Aside from the fact that I hated the main character with every ounce of energy in my body, I really wasn’t compelled at all to keep turning these pages night after night.

I gave this book numerous chances simply due to the number of people in their reviews who kept saying, “OMG!!! This was such a page turner for me!!” or “OMG!!! Best. Mystery. Evarrrrrrrr!” or “Holy shit! What a ride!”. And I’m sitting here completely emotionless void of all feeling, like, are we talking about the same book? Is it me? Did I not read what everyone else just read? Am I in some weird alternate universe? What just happened? Did the author give me a lobotomy when I wasn’t looking? Regardless of the answers to all of those rhetorical questions, I vehemently stand behind my 3-star review rating. I don’t normally branch out from horror novels, but I am not at all opposed to thriller / mystery / suspense novels. I just had a difficult time getting past the main character perhaps due to my own life experiences and how closely some of them were related (minus the murder) as well as the terribly rushed ending. Onto the next one!