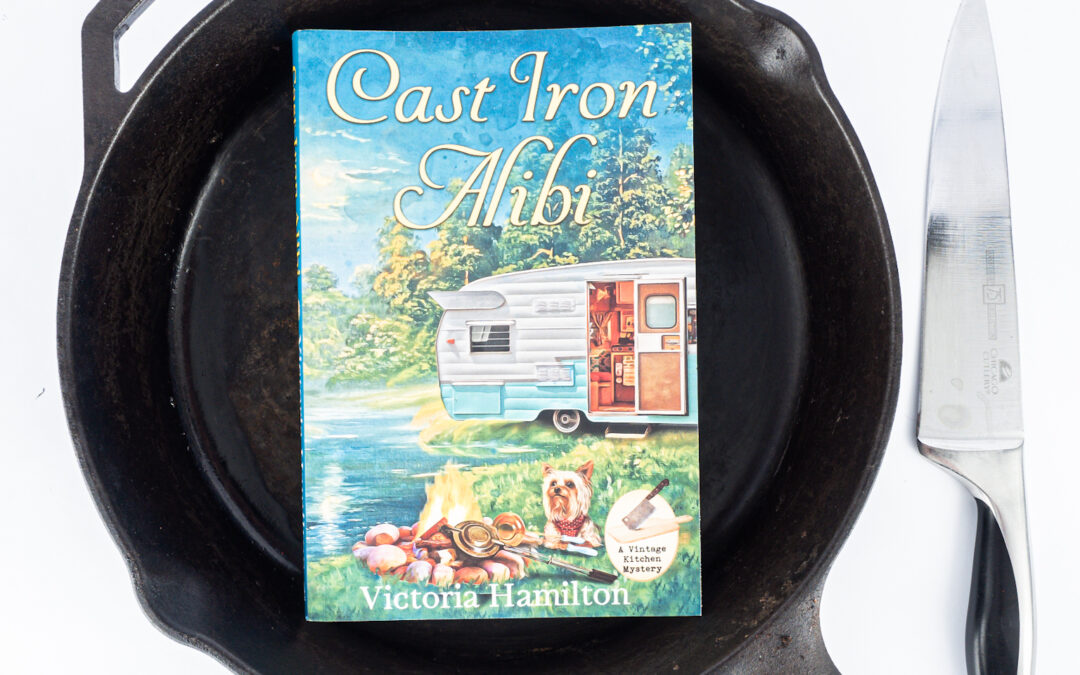 “Looking forward to her girls-only college reunion vacation, Jaymie’s on cloud nine at the idea of lazy trips to the beach, dinner cruises on the nearby river, and snug sleeping in the vintage trailer she’s renovated. But no sooner does the group reconnect than her hopes turn to tension as petty squabbles and old acrimonies surface, along with tagalong friends, unexpected guests, and stalkerish ex-husbands. And when a local toolbelt Romeo with an eye for one of the women is found murdered, his home ablaze, the simmering hostility in the group suddenly shifts to secrecy.
_ _
Local law enforcement is zeroing in on the victim’s best friend and girlfriend as the most likely suspects, but Jaymie’s inquisitive instincts are telling her one of her former classmates may have been involved in the foul deed. Forced to navigate her fraught relationship with a local police detective and determined to uncover the myriad secrets her college friends are hiding, Jaymie knows she’ll have to dig deep to figure out whose alibi is cast iron, and whose is flimsy as tin …” – Amazon

What first gripped me with the Cast Iron Alibi was the cover. This past summer, I went camping in a trailer similar to the one on the cover with some of my friends from high school. So that instantly brought back a fun memory, and then I read the synopsis of the book, and I was like, hmm. Sounds like our weekend in ways, but not with all the drama and definitely not the murder.

When I opened the book, the first thing I noticed was a cast of characters. And I was a little concerned with this. A cozy mystery having so many characters in a book, especially if this is the first one you’ve read of the series, can be challenging. I started reading and I found that wasn’t the case, which was great. Hamilton described the characters wonderfully and she included enough information from previous books that you weren’t lost or confused.

Some of the characters were very annoying. But this is true to life. I’ve known people from college whom I’ve remembered fondly and then later in life, I realized that they were kind of jerks the entire time and I just had rose colored glasses on. The one that really bothered me was Tiffany, who is one of the college friend’s sister-in-law. She was a very mean person, and Jaymie continued to let her stay there. She did eventually kick her out, but after the first time Tiffany was such a jerk. I would have told her to go.

The thing that I found interesting about this cozy mystery is that it didn’t follow the exact formula of other cozy mysteries that I’ve read. Usually the murder happens within the first few chapters and the main character stumbles across the body. In Cast Iron Alibi, I think it was about 70 pages in before there was finally a murder. So that was a little unique and different. It didn’t take away from the book at all that the murder happened later because there was so much drama going on with the Jaymie, all of her college friends, and all the people that they brought with them.

I did not see the killer coming, so that’s always a good thing for me. And the person who was the killer was an interesting choice. The other thing about this cozy that made it a little different than other cozies is it explored more sexual topics which are relevant to today’s world. I found that refreshing, because while I love cozy mysteries, this one felt more up to date. And in cozies they rarely, if ever, swear and if they do it’s hell or damn. Hamilton tried to push it a bit farther by having a character say Frick!

I am interested to get to know her husband, Jakob, and her stepdaughter, Jocie more in future books, since they were gone most of this book visiting family in Poland. I think her daughter, the brief amount of time that I met her, seems like a very fun character.

I would definitely recommend this book, and The Vintage Kitchen Mystery series. If you are interested, book one in the series is A Deadly Grind.