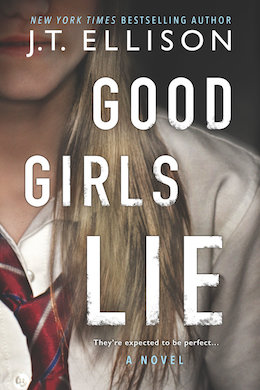 “Perched atop a hill in the tiny town of Marchburg, Virginia, The Goode School is a prestigious prep school known as a Silent Ivy. The boarding school of choice for daughters of the rich and influential, it accepts only the best and the brightest. Its elite status, long-held traditions and honor code are ideal for preparing exceptional young women for brilliant futures at Ivy League universities and beyond.
_ _
But a stranger has come to Goode, and this ivy has turned poisonous.
_ _
In a world where appearances are everything, as long as students pretend to follow the rules, no one questions the cruelties of the secret societies or the dubious behavior of the privileged young women who expect to get away with murder.
_ _
When a popular student is found dead, the truth cannot be ignored. Rumors suggest she was struggling with a secret that drove her to suicide.
_ _
But look closely…because there are truths and there are lies, and then there is everything that really happened.” – Amazon

I have two types of catnip when it comes to books; Witches coming into their powers and Secret Societies. Good Girls Lie by J.T. Ellison is filled with secret societies and teen drama, just like the shows I watch on CWTV. Don’t judge! Legacies, Nancy Drew, and Charmed, yup, some people think it’s trash TV, but I love it.

This is the second book I’ve read by Ellison, the first being Lie to Me. I really enjoyed that one, so I was excited to give this one a read. Good Girls Lie is filled with one twist after another. Many of them you knew were coming with the foreshadowing and clues Ellison weaved into the story. But this didn’t take away from the enjoyment of the book. And there was still some surprises that I didn’t see coming.

It’s told from multiple points of view, with the main one being Ash’s. I thought this worked well to keep the reader a bit off balance. Right when you’re starting to get into Ash’s head, Ellison switched to another character, one of them being a menacing voice that the reader may not be sure who it is.

There is plenty of character development. You will root for some of the characters, feel sorry for some, and perhaps hate a few. Ellison also does a fantastic job with the descriptive elements of the school and town. You can feel how lonely and isolated the school is, and how the town is dead only to come partial alive when the students go into town.

As with any good secret society book there are secrets, some deadly, hazing, and the questioning of one’s sanity. And of course, with an all girls school, you’re going to have some questioning of one’s sexuality. I thought Ellison did a good job of combining hormones with not being sure of your place in the world yet.

There are two reasons I’m giving Good Girls Lie four stars instead of five. The first being I felt the story could have been tightened up a bit, and that would have given it a more frantic feeling that would have enhanced it as a thriller.

The second is because of the very, very ending. If Ellison would have left it at the first ending, I might have given the book five stars, but the second ending was a bit too far-fetched for me, and it felt like a horror movie when they add on the last jump scare so there can be a sequel.

If you enjoy thrillers, secret societies, or all girl boarding school novels then you should give this one a read. I know I’ll be reading even more of Ellison in the future.