There’s Someone Inside Your House by Stephanie Perkins : Book Review by Scott 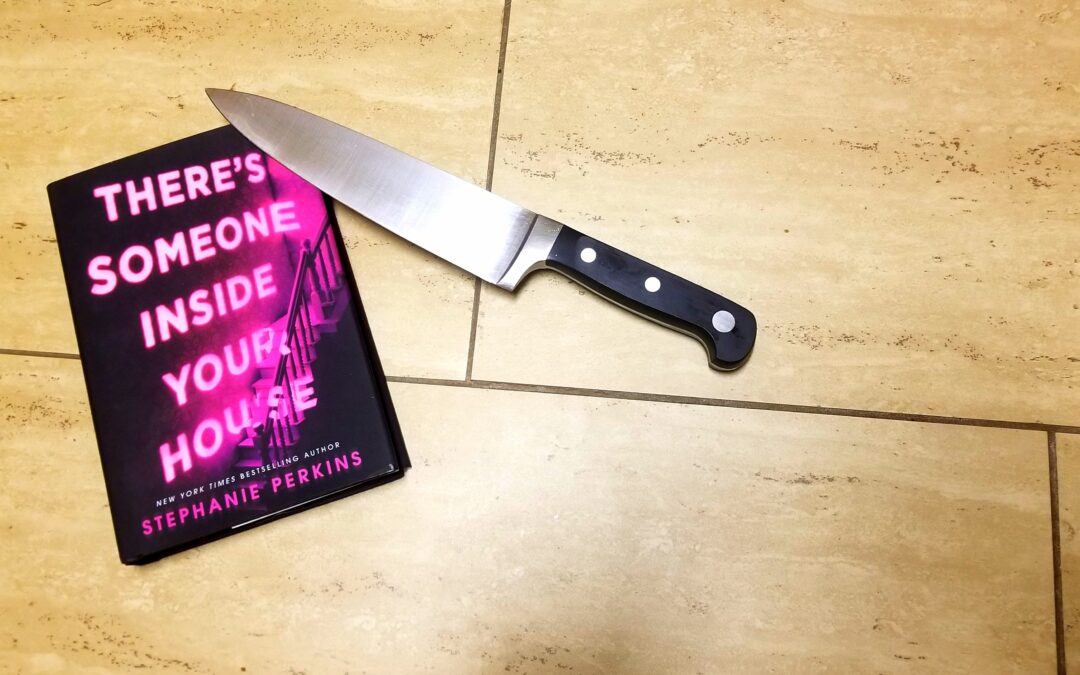 “It’s been almost a year since Makani Young came to live with her grandmother in landlocked Nebraska, and she’s still adjusting to her new life. And still haunted by her past in Hawaii.
_ _
Then, one by one, the students of her small town high school begin to die in a series of gruesome murders, each with increasing and grotesque flair. As the terror grows closer and the hunt intensifies for the killer, Makani will be forced to confront her own dark secrets.
_ _
Stephanie Perkins, bestselling author of Anna and the French Kiss, returns with a fresh take on the classic teen slasher story that’s fun, quick-witted, and completely impossible to put down.” – Amazon

I’m not going to rehash the synopsis of this book like I often do because the description you could read on the inside jacket is sufficient for this one. Someone described the book as “Scream meets YA” and that’s extremely accurate. Here’s what I loved about THERE’S SOMEONE INSIDE YOUR HOUSE: The murders were unique and the murderer was relentless which really had me yearning for someone to come along and beat the killer’s ass.

What I didn’t love about this book was basically everything else. The characters were poorly developed, in my opinion which really meant I didn’t care about any of them. I couldn’t form any bond to any of them and the book just simply didn’t have me care whether these teenagers lived or died. I couldn’t form a bond with any of them because I simply didn’t know enough about them. The whole thing just felt very regurgitated, boring and cookie-cutter. I know that sounds harsh, but give me a second here…

Despite it sounding like I’m completely roasting this book right away in the review, I’ll remind you that I finished this book in its entirety which means SOMETHING kept me turning the pages. Maybe I felt vested at some point in time, maybe I wanted to see the killer get what was coming to them, maybe I was mesmerized by the neon pink cover. Whatever the case may be, I finished the book. Let’s get back to the shortcomings…

So what bothered me first and foremost about the book were the characters and specifically, the romance between Makani and her boyfriend, Ollie. The number of sex scenes and make out sessions were more than I could count. They weren’t graphic or in poor taste, but holy shit, if I wanted to read a romance novel – I’d read a fucking romance novel. I’d venture a guess that the author was catering to the YA audience and love struck teenagers. I wanted more slashing and far less kissing. I’d turn the page and for f*ck sake, these people are making out again! No wonder you were all getting killed off so easily! Your head should have been on a swivel watching for the killer instead of locking lips every chance you could get. grrr! It was annoying to say the least and that alone dropped the rating of the book for me with each page I turned. Every time Ollie and Makani got close to each other, neither of them could control themselves and thus, I started skimming.

Besides the incessant make out sessions, I really, really, really wanted to feel SOMETHING for these characters and I just didn’t. Page after page after page and nothing ever developed. These young adults were just so shallow and I tried my hardest to form some kind of attachment to them. I just never did. There really isn’t much to say about that.

Makani’s secret mentioned in the synopsis was not this ground-breaking secret either so if that was the climax of the book, it was an enormous let down. That, and the fact that we actually learn the killer’s name at the halfway point in the book. So we know who the killer is and Makani’s secret is pretty lame. These two very large pieces of information in the book also made me drop down the star-rating of my review. I felt like – OK, the only thing keeping me reading this book at this point is the fact that I want to see someone slice ‘n dice the killer like the way they’ve done to their victim. Other than that, I was totally impartial to this entire book as a whole. Speaking of the killer, we, as readers, have absolutely no idea who this person is in the storyline. We don’t know a thing about them. We learn what their name is, but other than that, we know absolutely nothing about them. They’re supposed to be intertwined somehow in Makani’s life, but again, I don’t even know who this person is and we never really know why they’re killing all these teenagers. I trudged along…

I had incredibly high hopes for this book. First, the bright, neon pink cover with the silhouette of the staircase in the background was attractive to me. The title was reason enough for me to pick it up, as well. Unfortunately, I was never scared. I was never terrified. I didn’t even think about this book unless I was reading it which is unfortunate. Maybe I was too critical of this title so I read some of the other reviews on Goodreads and Amazon. The bulk of the reviews were also 3-star reviews similar to the rating that I am giving this one today. Similar gripes that I discussed throughout my review were present in other reviews. Thankfully, I’m not the only one who felt this way about the book because initially, I really did think it was just me. It wasn’t. All of that being said, I’m going to stick with my 3-star rating. It was OK which, in my opinion, is the whole point of a 3-star review. It was simply OK. I enjoyed some parts. I didn’t enjoy some parts. I finished the book, but it’s unlikely I’d read this one again. Perhaps an enthusiastic YA fan would enjoy this more than I did. Unfortunately, for me, I desired a little more.