In the Woods by Carrie Jones and Steven E. Wedel : Book Review by Scott 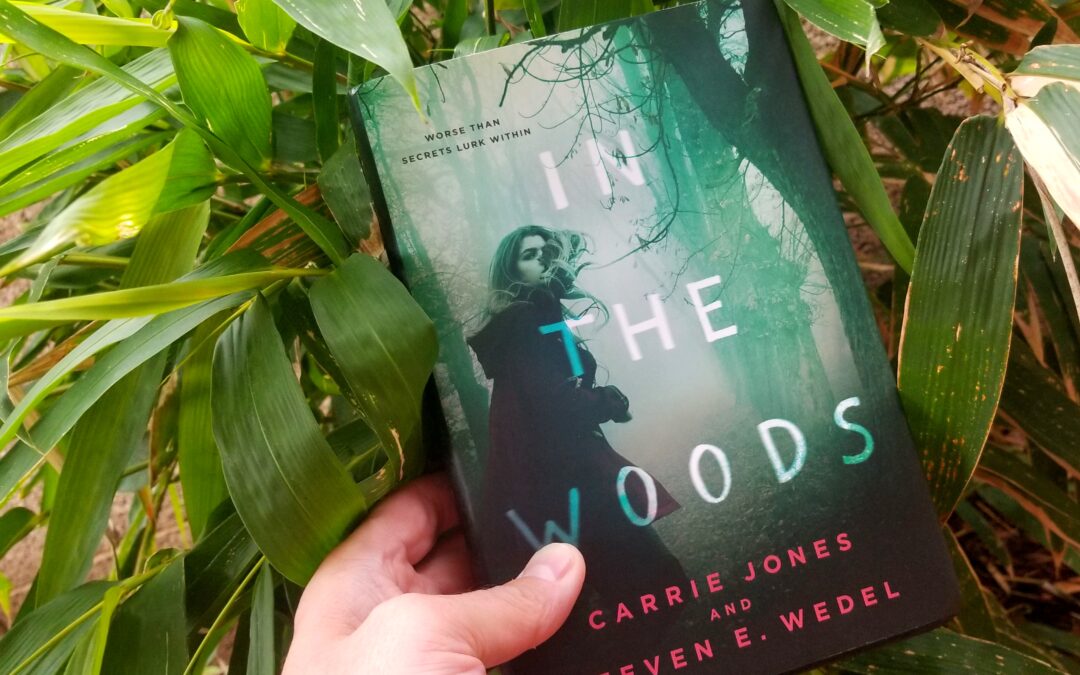 “It should have been just another quiet night on the farm when Logan witnessed the attack, but it wasn’t.
_ _
Something is in the woods.
Something unexplainable.
Something deadly.
Hundreds of miles away, Chrystal’s plans for summer in Manhattan are abruptly upended when her dad reads tabloid coverage of some kind of grisly incident in Oklahoma. When they arrive to investigate, they find a witness: a surprisingly good-looking farm boy.
As townsfolk start disappearing and the attacks get ever closer, Logan and Chrystal will have to find out the truth about whatever’s hiding in the woods…before they become targets themselves.” – Amazon

I absolutely loved this story! It takes place in a small town in Oklahoma. The book, like quite a few I’ve read as of late, alternates between two different points of view: Logan and Chrystal, our two main characters and thus, each chapter alternates between the two of them. Logan is in high school and lives with his family on their dairy farm. His morning chores include caring for the livestock and milking the cows. One morning, before the sun is even up, he’s finishing his chores and hears a God awful roar. He’s glancing in the direction of the sound and witnesses a thing / monster / humanoid rip the head off of one of their calves. In addition to the killing of this calf, random members of the community begin to go missing throughout the course of the story. Things begin going to Hell almost immediately.

The first portion of Chrystal’s story advises us she’s the daughter of Mr. Lawson-Smith. She’s spending the summer with her father, a prominent cryptozoologist who has heard about the event that has taken place on Logan’s farm in Oklahoma. He’s in Oklahoma to research what is causing this destruction. Chrystal, the same age as Logan, is accompanying her father on this summer adventure in Oklahoma. Logan is introduced to Chrystal and her father almost immediately when they show up at the family farm to get a better look of the scene of the crime involving the decapitation of one of their cows.
The story has an abundance of twists and turns in addition to the fast-paced action that doesn’t let up for even a second. When Logan’s father is injured by the beast and Chrystal’s father goes missing, it’s up to the two of them to get down to the bottom of this mystery once and for all!

“It doesn’t sound like a Bigfoot to me.”
“What does it sound like?”, my Dad asks, matching her whisper.
“Why, Sir, to the both of us, it sounds just like the Devil.”

This YA book was so much fun to read! EEK!! I absolutely loved it! Let’s talk about the plot and the storyline… and creature / thing / monster / beast / what have you that visits small town America wreaking havoc on the townsfolk. It’s really not that unique, right? It’s been done a billion times before. What makes IN THE WOODS unique are a couple of things and most importantly, are of course, the characters. I fell in love with Logan and Chrystal. They were so innocent, yet boldly determined. They were intelligent, but they were kids. They were discovering a newfound relationship between one another while going through several different traumatic experiences together. It was very well done and it made my heart full!

The other part of the story that I thought was unique was the monster itself. I’m not going to go into any gory details here because I don’t want to give away any spoilers. I can’t divulge most anything about the monster because going into specifics would give away so much about the book itself. I really don’t want to do that. Since it isn’t mentioned in the synopsis, I’m certainly not going to mention it in my review. If there’s one thing you can count on with my reviews, they are spoiler-free! Yayyyyyy!

I did my best to pace myself because I really wanted to hang out in this environment more. Despite how much I enjoyed this book, what I really wanted to see more of was a little more background on the monster in the book. I would have liked to see just a little more specific history on the monster. Everything was so matter-of-fact at times. I don’t think it necessarily detracted from the book, but it was something that was lacking just a bit for me, personally. Aside from this very, very minor gripe, have I mentioned how much I enjoyed this book?

I looked at a few negative reviews on Amazon and Goodreads like I typically do. The 1 and 2-star reviews seemed to comment about the author’s writing style, the romance between Logan & Chrystal, a few plot holes with no specifics given and the ending. I can’t comment on the author’s writing style as I rather enjoyed it. I don’t think Logan and Chrystal’s romance was over the top nor do I feel it detracted from the quality of the book. I thought it was just right. It wasn’t non-stop kissy-faces and I love you so much poochy moochy goochy bear. It was a very real first boyfriend / girlfriend experience. I thought it was tasteful and well-done, in my opinion. The ending, well, I think there’s differing opinions on endings of all books and movies and that’s just how it is. Either you enjoyed it or you didn’t.

If you’re a fan of horror, paranormal, mythological beasts, thrillers or YA books, I’d strongly recommend this title. It was fun, fast-paced and one I’ll likely end up reading again at some point! It was a solid 4-star review for me, fellow #bookish peeps! Add it to your #TBR list and check it out!