We Need to Talk About Kevin by Lionel Shriver : Book Review by Scott 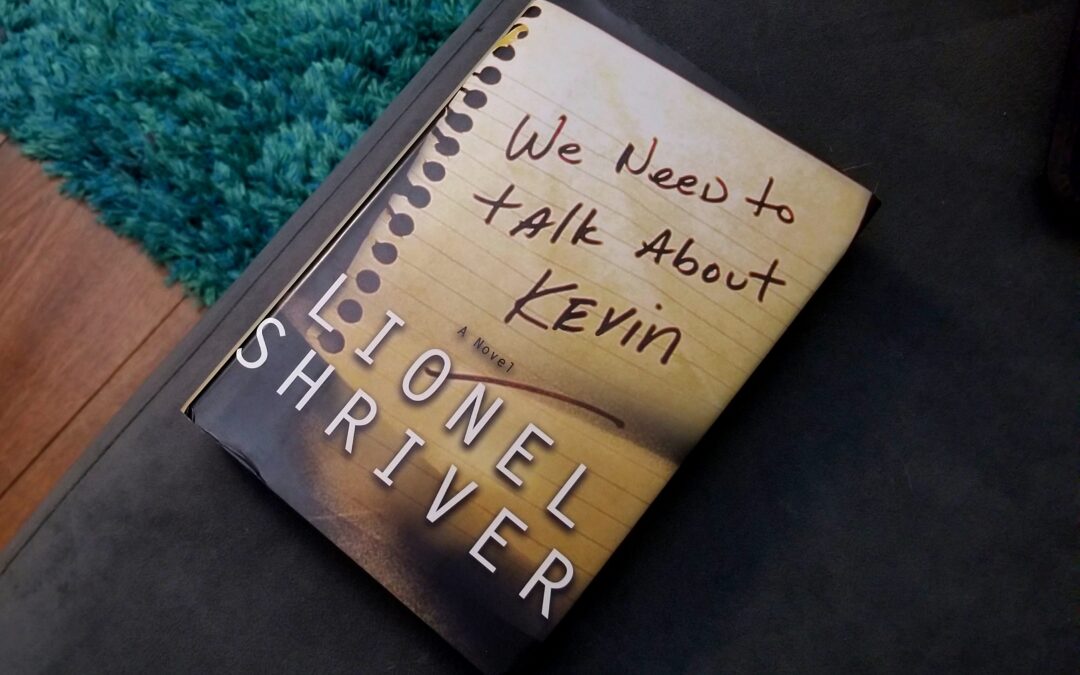 “That neither nature nor nurture bears exclusive responsibility for a child’s character is self-evident. But generalizations about genes are likely to provide cold comfort if it’s your own child who just opened fire on his fellow algebra students and whose class photograph – with its unseemly grin – is shown on the evening news coast-to-coast.
_ _
If the question of who’s to blame for teenage atrocity intrigues news-watching voyeurs, it tortures our narrator, Eva Khatchadourian. Two years before the opening of he novel, her son, Kevin, murdered seven of his fellow high school students, a cafeteria worker, and the much-beloved teacher who had tried to befriend him. Because his sixteenth birthday arrived two days after the killings, he received a lenient sentence and is currently in a prison for young offenders in upstate New York.
_ _
In relating the story of Kevin’s upbringing, Eva addresses her estranged husband, Franklin, through a series of startingly direct letters. Fearing that her own shortcomings may have shaped what her son became, she confesses to a deep, long-standing ambivalence about both motherhood, in general – and Kevin, in particular. How much is her fault?
_ _
WE NEED TO TALK ABOUT KEVIN offers no pat explanations for why so many white, well-to-do adolescents – whether in Pearl, Paducah, Springfield or Littleton – have gone nihilistically off the rails while growing up in the most prosperous country in history. Instead, Lionel Shriver tells a compelling, absorbing, and resonant story with an explosive, haunting ending. She considers motherhood, marriage, family and career – while framing these horrifying tableaus of teenage carnage as metaphors for the larger tragedy of a country where everything works, nobody starves, and anything can be bought but a sense of purpose.”

I really, really struggled with this book, you guys. I mean, I seriously struggled with it. After I finished it, I had to think for several minutes about this review. What did I struggle with? How could this book receive so many 4 and 5-star reviews? What did I miss? Why doesn’t anything rhyme with the word ‘orange’? There were a lot of pressing questions floating around in the nether regions of my mind before I dozed off last night.

I knew from the very first page that I was going to be in for a very, very, very slow read. I mean, I just knew it. The first issue that I have with this book is the writing. The verbiage, the writing style, the formality, everything. I keep a dictionary on my nightstand because when I read a word that I’ve not seen before nor understand the meaning of it, I take a second and look it up. I could keep on reading, but then I feel like I’m being ignorant and not showing any respect towards the writer. It only takes a few seconds. By the end of the first chapter, I had picked up my dictionary several dozen times. That is not an embellishment. That is not an over-exaggeration. I’d like to think I’m relatively educated. I’m not exactly doing trigonometry in my spare time, but I think I’ve got an average, perhaps even ever-so-slight above average vocabulary. Let me tell you something. I think before Lionel Shriver set out to write WE NEED TO TALK ABOUT KEVIN, she stopped at her local bookstore and bought the biggest damn thesaurus she could get her hands on. I think she thumbed through every chance she got and instead of making herself (or these boring characters) sound more intelligent, the only thing she managed to do was annoy the fuck out of me.

If I sound annoyed, that’s because I am. The thing you need to remember is that this entire book from start to finish is told from Eva’s perspective (Kevin’s mother) through a series of letters she has written to her husband, Franklin (Kevin’s father). Do you know any husband or wife in a series of letters who would use any of those words? …neither do I. In fact, I’m willing to bet I could poll 100 different couples on the street and not one of them have ever written a letter to the other where the word “codswallop” was used. Guaranteed. Come fight me if I’m wrong. The whole thing just felt so unnatural and fake to me. It was so formal and matter-of-fact. These were two people who loved one another. They lived together. They shared vows together. And you mean to tell me Eva is using the word “codswallop” in a letter to Franklin? Bullshit.

OK. I think I’m done with that fit. Next, these characters. I hated them. I mean, I completely loathed these individuals with every fiber of my being. Eva was self-centered, narcissistic, and selfish. Kevin was just an all-around horrible creature. He had everything handed to him on a silver spoon was still hell bent on committing mass murder. Franklin was oblivious, aloof, and just plain dumb. I just couldn’t relate to any of them much less make an attempt to understand what was going on in their heads. I felt completely disjointed the whole time and never felt connected to these people or their story. Not once. There were a few twists and turns throughout the book that I didn’t see coming, but they weren’t even good twists and turns. They simply made me hate these people even more. I don’t know how in the heck as a writer you make the conscious decision to force your audience to hate your characters which is why I feel like I may have missed something with this book.

The school shooting is an ugly event to begin with (obviously) and to try and wrap my mind around a story with characters I never connected with at all – the whole thing just seemed impossible to me. I was treading quicksand from beginning to end and I disliked every moment of it. Now… that being said, I’m not writing this book off completely which is why I’m still giving it 2-stars. If you eliminate the first 250 pages of the book and read the last 150 pages, it’s actually a much better story. It certainly didn’t need to be a 400 page book full of words no one in their right mind uses during everyday conversation. I know what you’re thinking – That’s codswallop, Scott! No. No, it isn’t. I enjoyed the ending of the book. I liked the ‘surprises’ and how dark and twisted it was. I enjoyed the dynamics of the relationship between Eva and Kevin. I just wish it wasn’t so over-the-top and so painfully written.

I’m not ever going to recommend you NOT read a review by anyone here at Books Don’t Review Themselves. I am going to recommend, however, that you take my review with a grain of salt. I’m feeling a bit self-conscious about this review mainly because I’m flabbergasted by the number of 4 and 5 star reviews out there. Did I miss something? Was there a gross oversight on my part? Did I not connect with these characters because I don’t have children of my own? How did I miss this supposedly brilliant and well written story? Do I lack any sort of emotion when it comes to small children? Do I need a hug? Am I craving chocolate ice cream? Actually, chocolate ice cream sounds really good right now. What the fuck was I saying? …oh yeah, so take my review with a grain of salt, please. Obviously, there are more readers out there who enjoyed this one than those who did not, according to reviews on Amazon and Goodreads. Unfortunately, I just couldn’t gain any traction with this book until the very last third of it. By then, the damage had been done and I wanted to gouge out my eyes with the very spoon I am using to now shovel chocolate ice cream into my face.

I’m onto my next one! If you think my review is codswallop, check out WE NEED TO TALK ABOUT KEVIN for yourself and let me know what you think at @booksdontreviewthemselves <3