All Hats on Deck by Sandra Bretting : Book Review by Kim 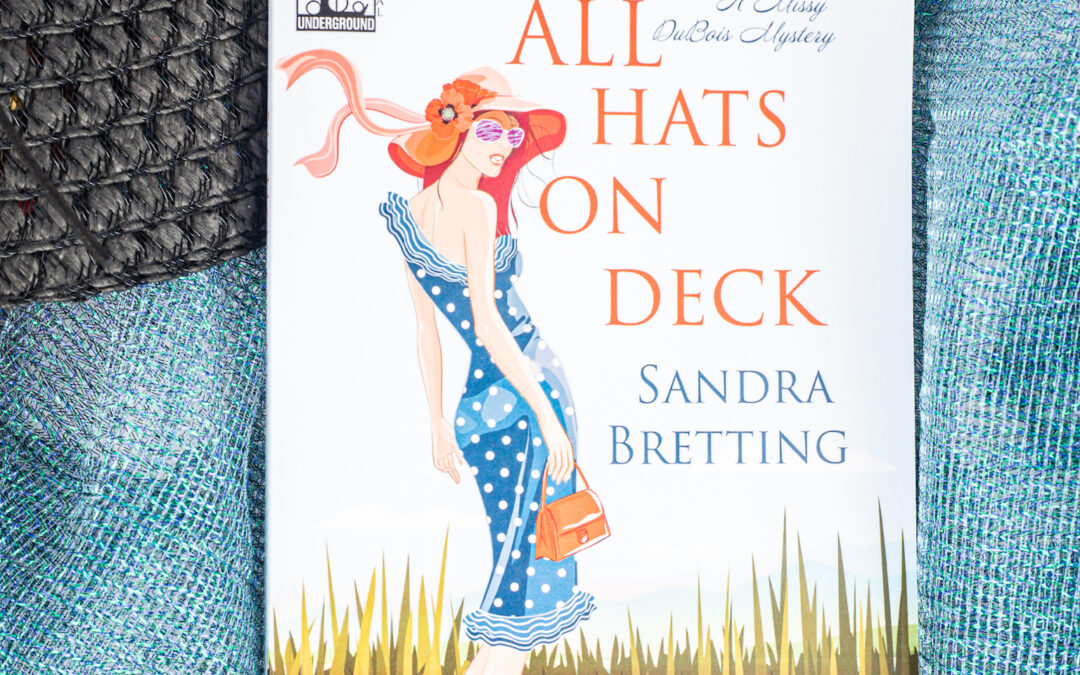 “When Ruby Oubre asks Missy to advise her grandson on a business idea, the successful owner of Crowning Glory is happy to oblige. After a quick jaunt down the river, Missy meets with eighteen-year-old Hollis about the viability of opening an alligator farm for tourists. But it isn’t an alligator Missy finds floating at the mossy bottom of the Atchafalaya River. It’s Ruby, and her death wasn’t caused by accidental drowning. It seems everyone from local tour boat operators to the chief of police and the mayor of Bleu Bayou had an eye on snatching up Ruby’s riverbank property. If Missy doesn’t unveil a greedy killer soon, her hat-making career could be bogged down for good …” – Amazon

I wanted to like All Hats on Deck more since I love books that take place down South and Ruby practices voodoo, but it was just okay.

The main characters were all enjoyable and people I would want to continue to get to know better. The descriptions of the town, bayou, and hats that Sandra Bretting writes about are all done very well. But the three biggest sticking points for me were the lack of suspects, that Missy was never at her shop, and the lack of consistency when it came to details.

In regards to suspects, it was pretty easy to guess who was in on it right away and even their motive. Often in cozy mysteries even if I think I know who the killer is early on, I’ll still not be sure of the motive until the big reveal. Unfortunately that was not the case here. I would be able to overlook that and give the book a higher score if that was the only thing.

Missy was never at her shop, constantly going back to the Bayou or her home. The character even comments at one point in the book on how when other business owners would leave their shops early she would still be there late into the evening, and now she was the one always leaving her shop for her employee, Beatrice, to contend with. Pointing this out doesn’t excuse her actions and it’s completely unbelievable that she’s able to maintain a business where she’s the only one creating the merchandise.

And if this would have been the only time where Missy points out a contradiction, that too could have been overlooked. But the contradictions continued throughout the book, starting with her telling her finance to tell Beatrice to go back to the shop instead of coming back, and then a bit later she’s wondering where Beatrice is. I should have marked the other instances but there were quite a few more.

The last thing that kept pulling me out of the story was whenever Missy referenced a past murder, she would say something like, “That’s a story for another day.” I have never had this happen in another cozy. Other cozy authors give you enough information to infer what had happened so you got the gist of it, either to be reminded of the event if you’re a long time reader of the series, or to clue you in if this is your first book in the series. By Bretting just having Missy say that it’s something for another day, I felt this was another cop out instead of editing the story better or adding more information.

But just because I didn’t enjoy this one, doesn’t mean you won’t, especially if you’ve read the previous Missy DuBois Mysteries. If you have read prior books in the series or this one, I would love to hear your thoughts in the comments!