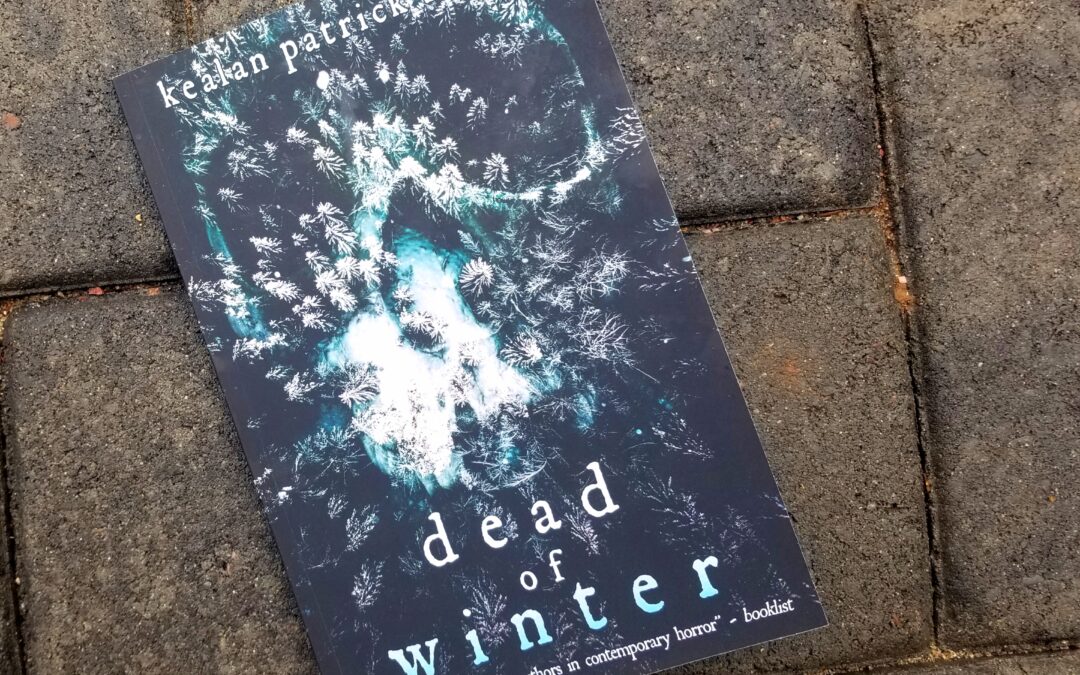 “Winter isn’t coming…it’s already here, and with it comes a horror no door can keep out. It’s there in the yard, in the faces of the snowmen a young boy doesn’t remember building. It’s in the oddly empty streets below Santa Claus’s crumbling sleigh. It’s in the unnatural movement of the snow that suffocates a widower’s town, and in the cold eyes of a lonely man’s estranged children. Here, there is no holiday cheer, only spine-chilling fear, in the DEAD OF WINTER.Featuring seven stories, an introduction by the author, and a list of recommended books for the winter season.” – Amazon

It’s no secret at all that I’m a huge fan of Kealan Patrick Burke’s writing. DEAD OF WINTER is no exception. It’s extremely atmospheric and downright spooky at times. There’s an eerie, haunting feeling from beginning to end that chills you to the bone. There are seven stories in this novella that focus on the wintry elements of this time of the year. A couple of them are holiday focused, but I like to imagine that the bulk of this book is fitting for this time of the season, especially if you’re in the Midwest or northern states. You know the time of the year I’m talking about, right? The holidays are over. Everything is gray and drab and bleak. It’s ugly and soggy because of the snow. If it’s not soggy, then it’s frozen in ice. Meanwhile, everything from the sky to the ground and everything in between is blanketed in this melancholy shade of off-white that’s more of the lightest shade of gray.

My favorite story in this collection is one entitled “Visitation Rights”. Isabelle and Kara are two young girls whose parents are recently separated. Their father has picked them up and brought them back to his little apartment. It’s his evening with his girls and he’s excited for the things he’s put on the agenda. Dinner and Christmas gifts. The story is quite literally five and a half pages in length. It’s so damn descriptive though that KPB chucks you into the middle of the tiny apartment. It’s as atmospheric as stories come. As I’m nearing the end of this little story that’s so full of holiday cheer, magic and a newfound divorced father hell bent on making his daughter’s holiday season special, KPB drops a massive bombshell just as he always does. It’s beautifully orchestrated where part of me feels nauseous and sick to my stomach and the other part grins an evil Grinch-like grin. The ending comes out of left field and smacks you upside your head in typical KPB fashion.

I don’t think this is my all-time favorite KPB novella, but it’s definitely one that is going to remain in my collection. Each story is beautifully presented with a couple of heavy hitters that I adored including, “Visitation Rights”, “The Quiet” and “Snowmen”. If you’re a fan of KPB and don’t yet have this one in your arsenal, add it. KPB continues to be among my all-time favorite writers and he’s absolutely awesome to follow on #instagram. The posts he puts in his Instastories are absolutely hilarious and he’s a writer incredibly appreciative of his fans. He connects with his fan base on a daily basis. It’s nice to see a writer of his caliber remain so humble while interacting on social media. Definitely a class act dude and I will continue to support his work. This collection is highly recommended especially since this bleak time of winter is officially upon us.