The Last Confession of Autumn Casterly by Meredith Tate : Book Review by Kim 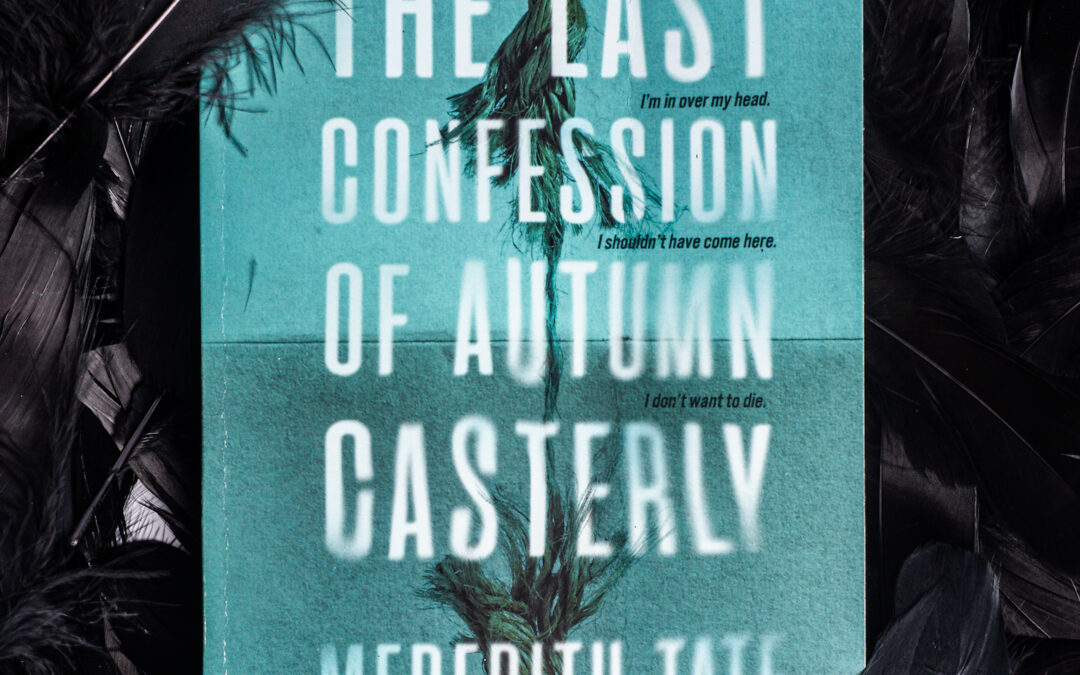 “When band-geek Ivy and her friends get together, things start with a rousing board game and end with arguments about Star Wars.
_ _
Her older sister Autumn is a different story. Enigmatic, aloof, and tough as nails, Autumn hasn’t had real friends–or trusted anyone–in years. Even Ivy.
_ _
But Autumn might not be tough enough. After a drug deal gone wrong, Autumn is beaten, bound, and held hostage. Now, trapped between life and death, she leaves her body, seeking help. No one can sense her presence–except her sister.
_ _
When Autumn doesn’t come home, Ivy just knows she’s in trouble. Unable to escape the chilling feeling that something isn’t right, Ivy follows a string of clues that bring her closer to rescuing her sister… and closer to danger.
_ _
Autumn needs Ivy to find her before time runs out. But soon, both sisters realize that finding her also means untangling the secrets that lead to the truth–about where they’re hiding Autumn, and what Autumn has been hiding.” – Amazon

One of my goals for 2020 is to read more YA novels, so when I saw The Last Confession of Autumn Casterly by Meredith Tate come up on the Bookish First website and read the first few chapters, I knew I had to read the whole book.

I saw bits of myself in both Autumn, and her sister, Ivy. With Autumn I enjoyed her tough exterior which quite early on we find is hiding a soft interior that is filled with pain and anger. Ivy is the geeky person I am and a lot of my friends are, so I would fit perfectly into their nerd herd. I really enjoyed the pop culture, board game, and comic con references that Tate peppered throughout the story. Even if the book didn’t turn out as good as it did, I still would have enjoyed it a lot for that reason.

As to why Autumn is such a juvenile delinquent there are signs early on in the book, but I was still surprised since my mind went in the direction of one person when it was actually someone else. The red herring that Tate mentioned early in the book threw me off of thinking about the other person.

Besides the mystery as to Autumn’s behavior (and I love mysteries) there is also the one as to who has taken her and where they are keeping her. This one I did not see coming at all, so the twist was a wonderful surprise.

Besides the mystery aspects there are also the relationships between sisters, parents and children, and friends. Tate gave the characters a lot of depth and they were well developed, even the secondary characters. Because of this it was easy for me to sympathize with some of them and want to see them with a happy ending. And it also meant that there were others that I really disliked and was glad to read what happened to them at the conclusion of the book.

There is also a supernatural element to the book with Autumn being between the plain of the living and the dead so she is able to kind of communicate with Ivy. I really enjoyed that it’s never really explained and saw it more as a bond that some siblings have even if they have not been that close for awhile.

The Last Confessions of Autumn Casterly is a sweet and thrilling book, one that I highly recommend.