All By Myself, Alone by Mary Higgins Clark : Book Review by Scott 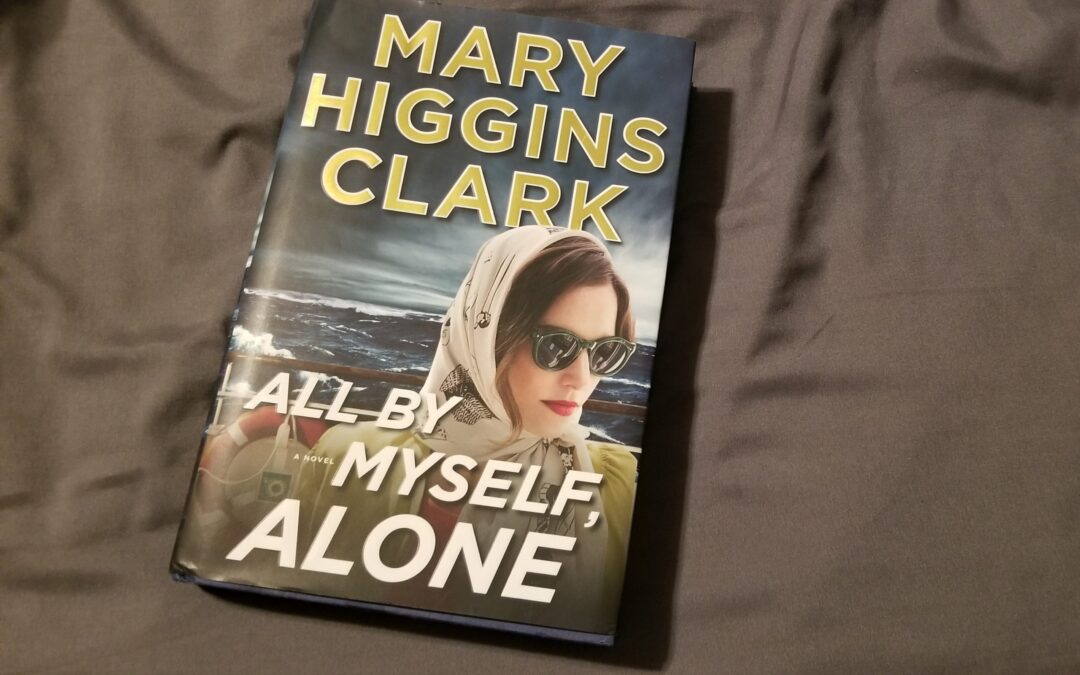 “Fleeing a disastrous and humiliating arrest of her husband-to-be on the eve of their wedding, Celia Kilbride, a gems and jewelry expert, hopes to escape from public attention by lecturing on a brand-new cruise ship—the Queen Charlotte.
_ _
On board she meets eighty-six-year-old Lady Emily Haywood, “Lady Em,” as she is known throughout the world. Immensely wealthy, Lady Em is the owner of a priceless emerald necklace that she intends to leave to the Smithsonian after the cruise.
_ _
Three days out to sea Lady Em is found dead—and the necklace is missing. Is it the work of her apparently devoted assistant, Brenda Martin, or her lawyer-executor, Roger Pearson, and his wife, Yvonne, both of whom she had invited to join them on the cruise? Or is it Professor Henry Longworth, an acclaimed Shakespeare scholar who is lecturing on board? Or Alan Davidson, a guest on the ship who is planning to spread his wife’s ashes at sea? The list of suspects is large and growing.
_ _
Celia, with the help of her new friends Willy and Alvirah Meehan, who are celebrating their forty-fifth wedding anniversary, sets out to find the killer, not realizing that she has put herself in mortal danger before the ship reaches its final destination.” – Amazon

This was my very first Mary Higgins Clark novel. I saw this title circulate every so often on the #bookstagram feed. Since Mary Higgins Clark passed away not too long ago on Jan. 31, 2020, I thought it would be a good time to pull this one off the shelf and give it a whirl. It’s a fairly straightforward mystery novel chock full of suspense and death – just the way I like ’em.

The Queen Charlotte is a luxury cruise ship set to rival that of anything that exists at the moment. The who’s who of celebrity status, a few media personnel and anyone else of importance is set to take its maiden voyage. One of the most notable people on board the ship is the one and the only, Lady Em, who is owner of a priceless emerald necklace once worn by Cleopatra. She’s wearing the necklace for the first time in public while a few notable gemologists, also on board the ship, are there for lecture purposes and to see the necklace first hand. Unfortunately for Lady Em and the other guests on board, a gentleman known by the alias as “the man of a thousand faces” is also on board the ship. He’s there to take the necklace at any cost to anyone who tries to stand in his way.

I liked this book.

Just kidding. Sort of. I’m not a big fan of the stereotypical mystery novel only because they seem so one-dimensional. Insert antagonist. Insert problem. Insert protagonist. Blah blah blah. Problem solved. The end. I pretty much had the whole book solved 30 pages into it which left me lusting for a whole lot more. The entire book takes place on the Queen Charlotte which in and of itself is fairly limited. I say that because aside from the dining hall, the upper deck and a couple different staterooms, I couldn’t even get a feel for this cruise ship liner. I mean, the book goes into how it’s this vast luxury liner hell bent on rivaling that of the Titanic and the only picture that’s painted for me as the reader is a few square feet on this big ass boat. It was really unsatisfying.

I really couldn’t relate to any of these boujie ass characters either. I found it difficult to put myself in their shoes because I simply couldn’t relate to anything they were discussing and what was most important to them. Owning a piece of jewelry once owned by Cleopatra is about as far away from who I am as possible. Despite not relating very well to the characters and despite the predictability of the story, I enjoyed the book enough to keep reading.

I can’t rant ‘n rave about it blowing me away, but it was a solid 3-star read. This one got very mixed reviews on both Amazon and Goodreads. I’d imagine if you’re a newcomer to Mary Higgins Clark like I was, there are probably other titles in her collection that are more worthy of exploration. A quick view of her other titles showcased some noteworthy best sellers and 4.5-star reads such as “You Don’t Own Me” and “Kiss the Girls and Make them Cry”. I may try one of these in the near future so I can give Mary Higgins Clark and her extensive fan base the due diligence they both deserve. ’til then, ALL BY MYSELF, ALONE is a solid 3-star read.