A Bad Day for Sunshine by Darynda Jones : Book Review by Kim 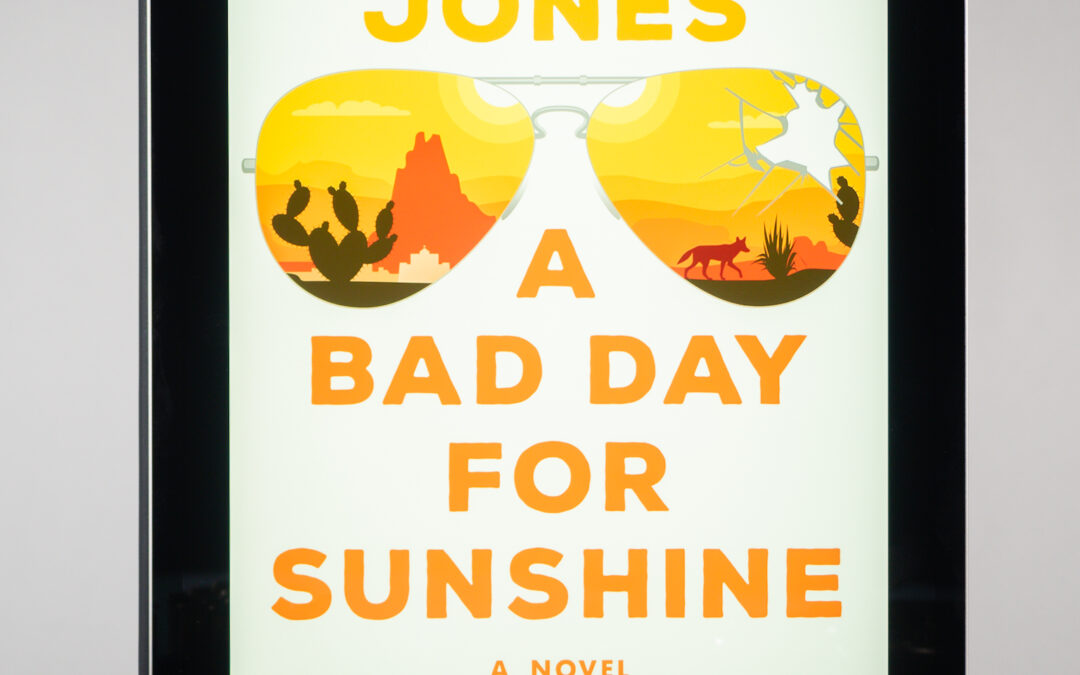 _“Del Sol, New Mexico is known for three things: its fry-an-egg-on-the-cement summers, its strong cups of coffee—and a nationwide manhunt? Del Sol native Sunshine Vicram has returned to town as the elected sheriff—an election her adorably meddlesome parents entered her in—and she expects her biggest crime wave to involve an elderly flasher named Doug. _
_ _
But a teenage girl is missing, a kidnapper is on the loose, and all of it’s reminding Sunny why she left Del Sol in the first place. Add to that trouble at her daughter’s new school and a kidnapped prized rooster named Puff Daddy, and Sunshine has her hands full.
_ _
Enter sexy almost-old-flame Levi Ravinder and a hunky US Marshal, both elevens on a scale of one to blazing inferno, and the normally savvy sheriff is quickly in over her head. Now it’s up to Sunshine to juggle a few good hunky men, a not-so-nice kidnapping miscreant, and Doug the ever-pesky flasher. And they said coming home would be drama-free.” – Amazon

When the Charley Davidson series by Darynda Jones was still being written (it ended with book 13) I would take the day off of work when her latest book came out, so I could read it that day. I did not savor it, I devoured it. Continually chuckling and falling deeper and deeper in love (in most cases friend love, although with Reyes, that’s a different story) with the characters. When the Charley Davidson series finished I was content with how it ended and looked forward to what Jones would come up with next.

And she did not disappoint!

If you’ve read the Charley Davidson books you will see some similarities. The chapters all begin with wacky things, but instead of sassy T-shirt sayings, you get crazy police recaps and wacky signs from the local restaurants. And there is a brief run in with Donnie, who was the bartender in the Charley Davidson series. This was a fun nod to that series, and I felt like a little gift left for the readers of Charley.

While characters using ASL (American Sign Language) played a part in the Charley Davidson books, in A Bad Day for Sunshine, Jones ramped up the use, which is fantastic. I love reading about people doing things I know little about. Jones’ oldest son was born deaf and she is a sign language interpreter in an educational setting, so she has first hand knowledge with ASL and it really shows in her writing.

And as for the story itself, it’s full of zany characters and hints of the strange, and perhaps supernatural, when it comes to what happens in the town. A member of her mom’s book club may be psychic and instead of telling the police when something is going to happen, she bakes them muffins. Feuds over a chicken, I mean a rooster, bring levity throughout the book. And Sunshine can’t seem to locate one of her deputies. Every time she asks about him, the only response is Who?, or that he’s out on patrol.

But A Bad Day for Sunshine isn’t all laughs. Jones also touches on some serious subjects, including suicide and adoption. I was tearing up on some of the chapters. So much emotion and hurt drifted off the page, once again showing what a great writer Jones is.

I recommend this book sooooo much! Especially if you enjoyed the Charley Davidson series. But if you’ve never read that series, read this book and then go back and check out Charley in the first book, First Grave on the Right. Readers of the Stephanie Plum series by Janet Evanovich may also enjoy both Charley and Sunshine.