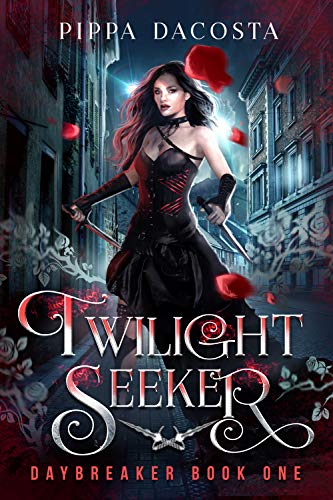 “Meet Lynher Aris, hostess extraordinaire. By night, she entertains the Dark Ones passing through the Night Station: vampires, demons, shifters, and worse. By day, she undermines them all by working with the resistance to unravel their enslavement of the human race. But Lynher has a dark secret, and with the imminent arrival of Ghost—a vampire overlord few have seen but all fear—she must play her role as the queen of the Night Station to perfection, keeping the resistance and her secret safe, or risk losing everything, including the powerful Night Station itself.” – Amazon

I knew Pippa DaCosta wrote urban fantasy, I just never got around to reading her books… until now. And The Daybreaker series is just what I’ve been looking for!

While she’s her own writer, humans like to compare things, so for me, her writing reminds me of Kim Harrison’s, The Hollows and Laurell K. Hamilton’s, Anita Blake series… before the series was 90% sex… when I really enjoyed it because there was a solid story.

I’ve been wanting to find a new series since I don’t read Anita Blake any more. Kim Harrison had stopped writing the series, although she decided to start up again with American Demon, which comes out in June, and I am so excited! And Jim Butcher hadn’t put out a new book in the Harry Dresden series in six years… although this year we’ll be getting two new books in that series!!!

Twilight Seeker has all the essentials in an urban fantasy; complex characters, a well developed world, it’s fast paced, and the stakes are high for everyone. And by placing the story around a train station and hotel, DaCosta has set up a series with so much potential with new guests arriving all the time, which means lots of new adventures for the reader.

The train may or may not be a living thing (we all know it is…) and it reminded me of the short story arc in Lost Girl that had the Death Train in it, which was a purgatory that exists in a dimension outside of the physical plane. And if you’ve never watched Lost Girl, but love urban fantasy, do yourself a favor and binge.

And do yourself another favor and read Twilight Seeker. I’m going to go get book two now, Night Scourge, and lose myself again in this amazing world!