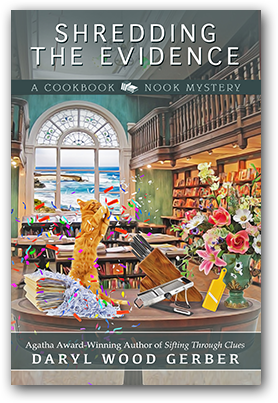 “The denizens of Crystal Cove are salivating over the upcoming Food Bowl Week, when local chefs offer some of their best and most imaginative creations in bite-size portions all over town. Bookstore proprietor Jenna Hart is hungry to sample as many of the delicacies as she can, but when she stumbles onto the dead body of a local food reporter and learns that her best friend’s husband is the primary suspect, she’ll have to summon the appetite for a side dish of sleuthing to prove his innocence.
_ _
Jenna knows the ambitious and aggressive reporter, who was strangled at a fitness center with her shredded restaurant reviews scattered around her, left behind a long list of potential suspects. As she begins piecing together the scant clues, she uncovers illicit ties between the victim and a local newspaper owner, a spurned would-be lover, and a host of disgruntled restaurant owners not a bit torn up by the critical reporter’s demise. And with a solution so close she can almost taste it, Jenna turns up the heat on the culprit, realizing too late that she’s the next course on the murderer’s menu …” – Amazon

Daryl Wood Gerber once again captures the essence of the Cookbook Nook Mystery series in Shredding the Evidence, which is food. In this volume, a week long Food Bowl event is happening in Crystal Cove, and all the events and food descriptions made me wish Crystal Cove was a real town. And then there’s the recipes at the end of the book, all of which look fairly easy to make, and they all sound so tempting.

And we couldn’t have a cozy without a murder. This one was very unique in the murder weapon, and Gerber provided lots of clues and red herrings to keep the reader guessing. I thought I knew the killer early on, although I wasn’t completely sure what the motive would be. But Gerber kept tempting me with two other very strong options, so I did question myself a couple of times. I will say the murderer and motive was nothing new and I’ve been seeing a trend in cozies lately that have been giving the readers this type of killer. I want to say more about it, but I don’t want to give anything away.

We once again get to visit our character friends and see what is happening in their lives. Jenna is starting to make plans for her wedding, which is so much fun, since this series started with her being a widow. And as always, Aunt Vera is my favorite, although we see a lot more of Bailey and Tito in this book since Tito is accused of murder, and Bailey will stop at nothing, including very aggressively questioning suspects.

Another solid addition to the Cookbook Nook Mystery series.