Ghosts of Harvard by Francesca Serritella : Book Review by Kim 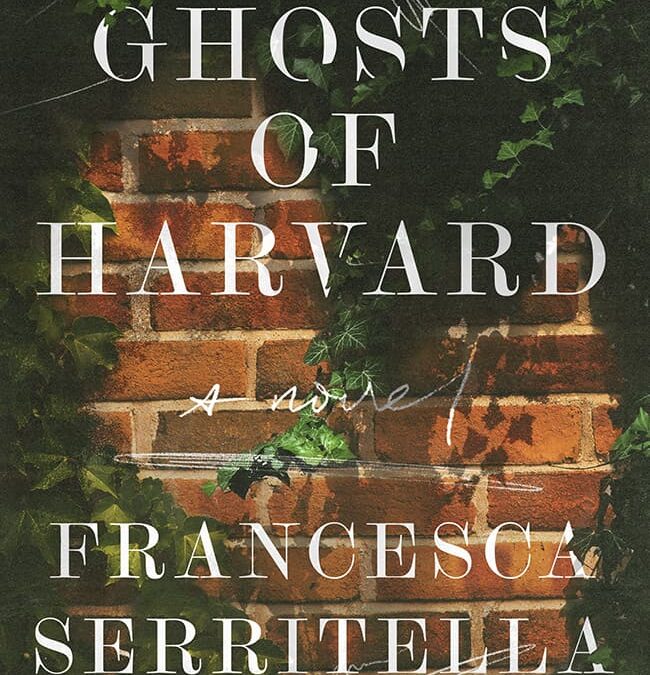 “Cadence Archer arrives on Harvard’s campus desperate to understand why her brother, Eric, a genius who developed paranoid schizophrenia took his own life there the year before. Losing Eric has left a black hole in Cady’s life, and while her decision to follow in her brother’s footsteps threatens to break her family apart, she is haunted by questions of what she might have missed. And there’s only one place to find answers.
_ _
As Cady struggles under the enormous pressure at Harvard, she investigates her brother’s final year, armed only with a blue notebook of Eric’s cryptic scribblings. She knew he had been struggling with paranoia, delusions, and illusory enemies—but what tipped him over the edge? Voices fill her head, seemingly belonging to three ghosts who passed through the university in life, or death, and whose voices, dreams, and terrors still echo the halls. Among them is a person whose name has been buried for centuries, and another whose name mankind will never forget.
_ _
Does she share Eric’s illness, or is she tapping into something else? Cady doesn’t know how or why these ghosts are contacting her, but as she is drawn deeper into their worlds, she believes they’re moving her closer to the truth about Eric, even as keeping them secret isolates her further. Will listening to these voices lead her to the one voice she craves—her brother’s—or will she follow them down a path to her own destruction?” – Amazon

While reading Ghosts of Harvard by Francesca Serritella, I was amazed by her descriptions of the architect and the grounds of Harvard. You can tell she really explored the campus while there. And the history of the campus was very cool to read. One of the many reasons I love books is all the new things you learn, like when Harvard first began they had slaves who worked there. One of the many things I never learned in school.

At 471 pages this is a longer book, but I wanted more… of some of it at least. The first 20% was Cadence aka Cady, rehashing her brother’s death over and over. And then it was repeated heavily throughout the rest of the book. While we all need to talk about mental illness and suicide more, I also pick up a fiction book for enjoyment, not to be brought down repeatedly. It took me a bit to finally get into the story, and then there wasn’t enough.

I think people who read the synopsis and are drawn to Ghosts of Harvard for the supernatural aspect of the book may be disappointed. Although there is a ghost story in the book, well, actually three, it comes down to the ghosts helping Cady deal with her brother’s death, even while she is interacting with them. I wanted more of the ghosts. I wanted the ghosts to mean more than being a way to help her with her issues or teach us about history (even if they did in a cool way). And later on, when the mystery gets more involved, I wanted more of the conspiracy that her brother had been experiencing.

So while there was too much of reliving her brother’s death, for me, there wasn’t enough mystery, ghosts, and conspiracies. Which makes me a bit sad because what Serritella did write in regards to them was excellent.

I still highly recommend this book though, even if it wasn’t exactly what I was looking for.