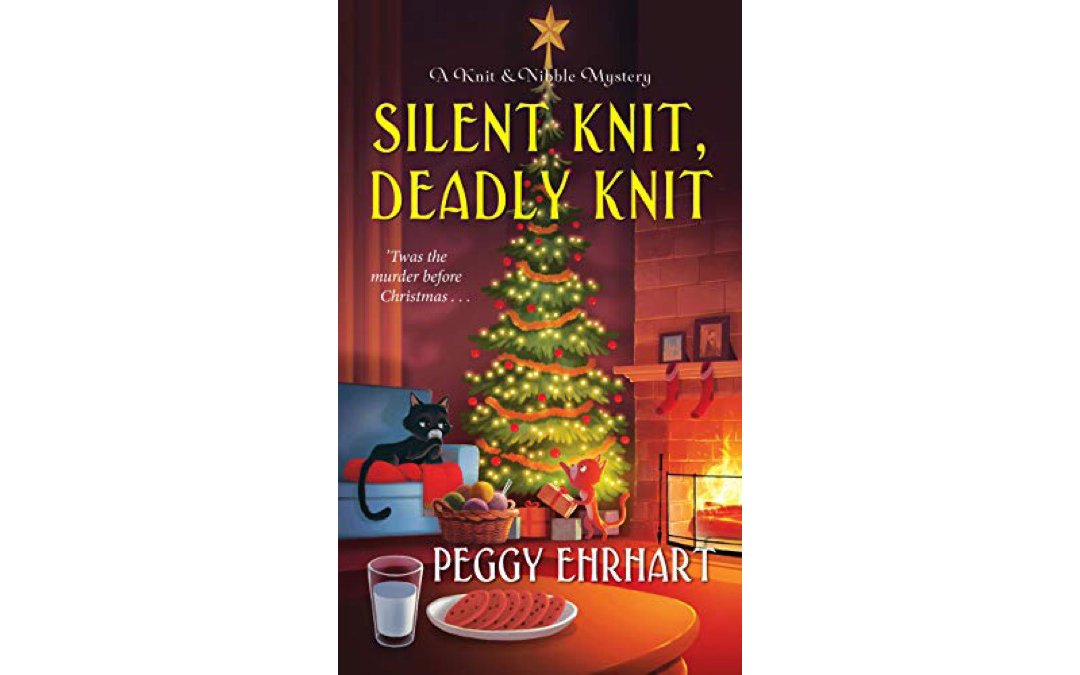 _“Pamela has been in merry spirits since her artsy daughter Penny returned home from college for the holidays. But their mother-daughter bonding time gets cut short when a terrified Penny stumbles upon the dumped body of Millicent Farthingale, a wealthy craft shop owner who was popular for all the wrong reasons. _
_ _
From a scheming business partner to a seedy husband several years her junior, Millicent attracted scammers so in love with her assets, they’d toss her down a chimney to get their paws on them. Now, with only a hand-knit red scarf connecting the killer to the crime, Pamela and the Knit and Nibblers could use some extra creativity as they find out who’s really naughty or nice in Arborville—because going up against a looming culprit is DIY or die!” – Amazon

Silent Knit, Deadly Knit by Peggy Ehrhart is the first book in the Knit and Nibble Mystery series that I have read. Although it’s book four, Ehrhart gives enough background information on the characters and previous events that you won’t be lost.

I always hate giving a book less than a four star rating, but sometimes it has to be done. Especially since I write book reviews so people know what they are getting into. But reviews are subjective and what I found to be a problem with this book might be something that others enjoy reading.

There was a lot of filler in this book. I think Ehrhart mentioned how to make coffee at least ten times in this book. The neighbors pumpkin colored coat and Penny’s violet coat and scarf were mentioned almost every time they went outside or came in from outside. Whenever Pamela would pick up something around her house it had to be said if she got it from a tag sale or some other second-hand shop. When they were looking through her friend’s items at the estate sale, a black and white outfit was mentioned twice in the same paragraph… and I think the paragraph was only three sentences long!

If you were to take out all of the descriptions and repetitive household events, the book would be only half as long and I would have been fine with it. I would rather have a short, well-written book than one with a lot of fluff.

I did get a good feel for the characters which always makes for a good cozy. It was not consistent how Pamela treated her 19 year old daughter though. One minute she was letting her drink alcohol and then she needed to know where she was all the time. And the way Pamela and the potential love interest were interacting was very high-schoolish to me, by book four I would think it would have moved along a bit more.

I did really enjoy the mystery reveal though and didn’t see it coming. Plus I really enjoyed the details behind it. Maybe if I had started with book one, Murder, She Knit, and had really gotten to love the characters I would continue reading the series, but there are just so many great cozy mystery series to read that I don’t want to settle for a just okay one.