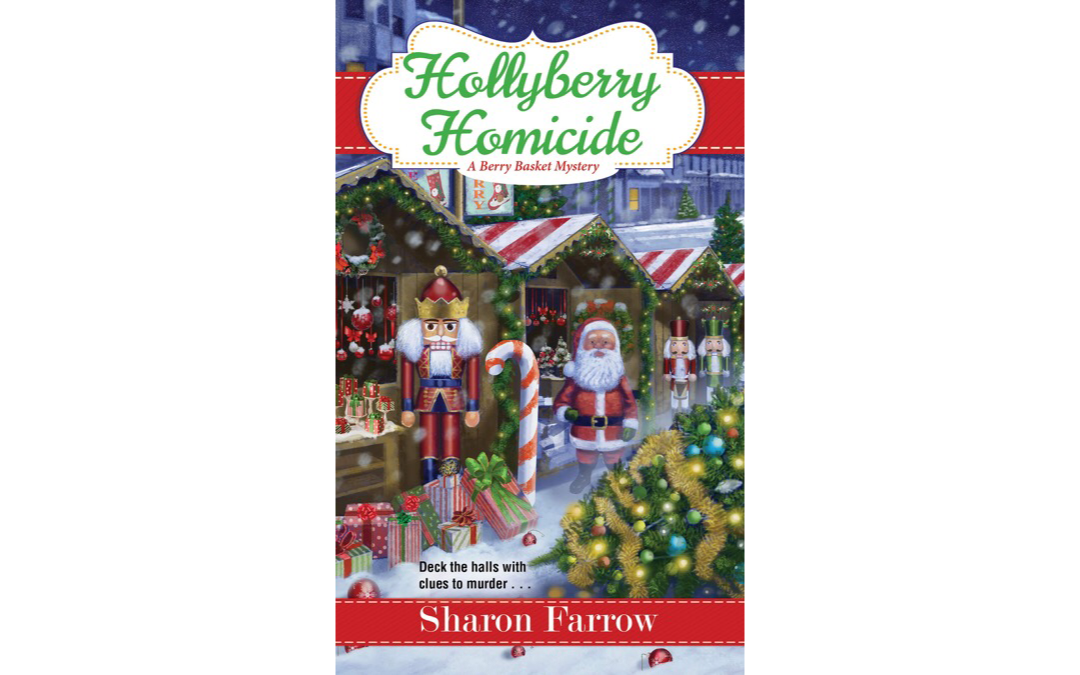 “Considering her name, Marlee Jacob is an obvious choice for the role of Jacob Marley in Oriole Point’s production of A Christmas Carol. It’s just sad that the role has opened up because of the death of the elderly actor who’d originally been cast.
_ _
But Marlee, the proprietor of The Berry Basket, will do her best to keep spirits high—that is, until clues start mounting that there’s danger behind the scenes. There are accidents on set, the tree in the village square topples over, and worst of all, a body is found with a sprig of holly draped over it. If Marlee can’t wrap up the case, she may not have a berry merry Christmas …” – Amazon

The Summer of 2019 saw me reading a lot of cozy mysteries and they were all starting to feel the same. Still enjoyable, but no real wow factor. I was getting burnt out on the genre.

And then Mulberry Mischief, the fourth book in A Berry Basket Mysteries, found its way into my life and my enjoyment for cozies was reignited. Sharon Farrow introduced me to very well developed characters and a town I knew I would want to visit again. But what really stood out to me was that she actually had some nasty characters, and not just someone who died right away and we find out they weren’t very nice. These evil characters were present throughout the story and added even more depth to the book.

So when I saw Hollyberry Homicide was coming out I knew I would be reading it. And I was not disappointed. Farrow continues developing her characters, and even better, something is always happening. In some cozies most of the story is just the sleuth running around tracking down clues and talking to suspects. But in A Berry Basket Mysteries, we are not only engaged in Marlee’s life, but those of her friends and co-workers… even with the people that Marlee can’t stand!

Farrow also incorporates the Christmas theme really well. In some cozies it’s more so for the cover art and mentioned a couple of times in the book, but not so in Hollyberry Homicide. You get Christmas from Marlee’s obsession with decorating her house and store, to the various times she is preparing food for her shop and parties, to the town’s huge Christmas tree falling over numerous times because of the lake effect winds. It seems like every chapter mentions the holidays, but it’s done well.

As for the murder, there are lots of suspects whose secrets slowly come out over the course of the book. I thought for sure I knew who the killer was, but I was wrong. And I am so happy with who the killer turned out to be.

You don’t need to start A Berry Basket Mystery series from the beginning because Farrow knows how to fold the reader into the story without them becoming lost. But if you do decide you want to (and you should because it’s a great series!), then the first book is Dying for Strawberries. And while you’re at it, you may as well buy all the rest of the books in the series too!