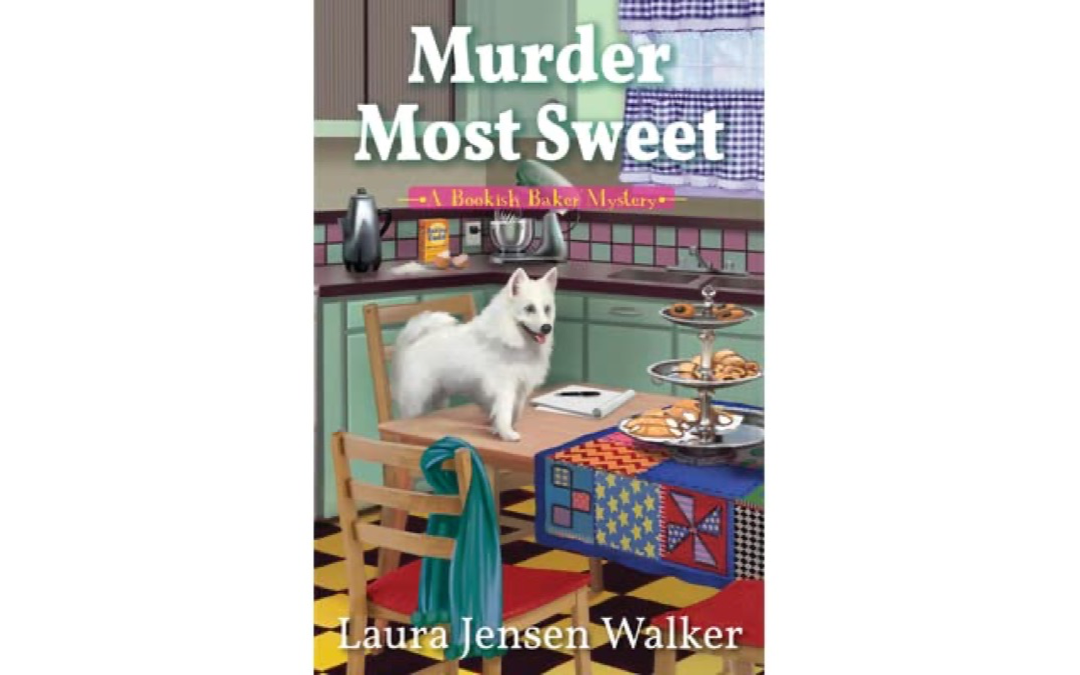 “Everyone in Lake Potawatomi, Wisconsin, knows Teddie St. John. Tall, curly-haired Teddie is a superb baker, a bohemian bon vivant, and a mystery writer. Teddie is walking her American Eskimo dog, Gracie, when her four-legged friend finds Teddie’s missing silk scarf. Only problem: the scarf is tied tightly around the neck of a beautiful blond woman, the fiancée of a touring British author.

Before you can say “Wisconsin kringle,” Teddie becomes a murder suspect. Everyone in town knows all too well that the distinctive scarf was hers. But there are more layers to this case than there would have been on poor Kristi’s wedding cake. Tavish Bentley should be bereaved after his sweetheart’s strangling. Instead, the dashing Brit takes a shine to Teddie’s witty wisecracks and to-die-for cookies, and soon he’s mooning over her instead of mourning his bride. That is, when he’s not dodging the attention of Annabelle, an obsessive fan who’s taken to stalking him.

And when a second murder shocks the community, the plot thickens to the consistency of fondant as Teddie stands accused of not one, but two, murders. With the help of her friends Sharon and Char, can Teddie clear her name and deliver a killer’s just desserts?” – Amazon

I may be a bit biased, having been born and raised in Wisconsin, but Murder Most Sweet by Laura Jensen Walker is a fantastic start to A Bookish Baker Cozy Mystery series!

I think everyone will enjoy the book, but those from the Midwest will find all the local nods super fun. Yous Guys (not you guys, yous… yes, that’s how some folks around here talk), Kringles (a delicious Danish pastry with lots of flakey layers), Pabst Beer (the first beer I drank and probably the reason I don’t drink beer… you either love Pabst or hate it), and Walker even ended the book with a nod to Accordions and Polka Music… you really can’t get more Wisconsin than that.

There were so many great characters too. I often find myself liking the sleuth’s friends or sidekick better than the protagonist, but Teddie is awesome. I love her sense of humor and that she is very forthcoming about her double mastectomy. And the way Teddie is with her American Eskimo, Gracie-girl is adorable, and so true to how people are with their fur babies. I had never heard pee-mail before, when a dog is checking out what other dogs have been in their territory, but loved the image… if we had a dog instead of three cats, that’s what I would say, “Are you ready for pee-mail time?!?”

And Teddie’s friends and love interest are wonderful too. First, I just love the love interest’s name, Tavish, and he really does seem lovely. 😉 He brings her flowers, helps out when he can, and loves dogs too… as a bonus he’s a writer too and rich. Yes, please!
Sharon and Char really do act like people who you’ve been friends with forever, they don’t put up with any of Teddie’s bull and push her towards a relationship. I was a bit concerned with Teddie’s mom at first, I’m so over mom’s being horrible to their daughters in cozies, but by the end of the book, Claire is a more enjoyable character.

As for the mystery there were plenty of suspects and some red herrings. I did know who the killer was early on, but that’s just because I read a lot of mysteries, and it was more of a gut feeling.

Already looking forward to book two in the series, Deadly Delights, coming out later in 2021, and I’m excited to read Walker’s other new cozy mystery series coming out January 2021, with the first book being called Hope, Faith & A Corpse.