Without a Brew by Ellie Alexander : Book Review 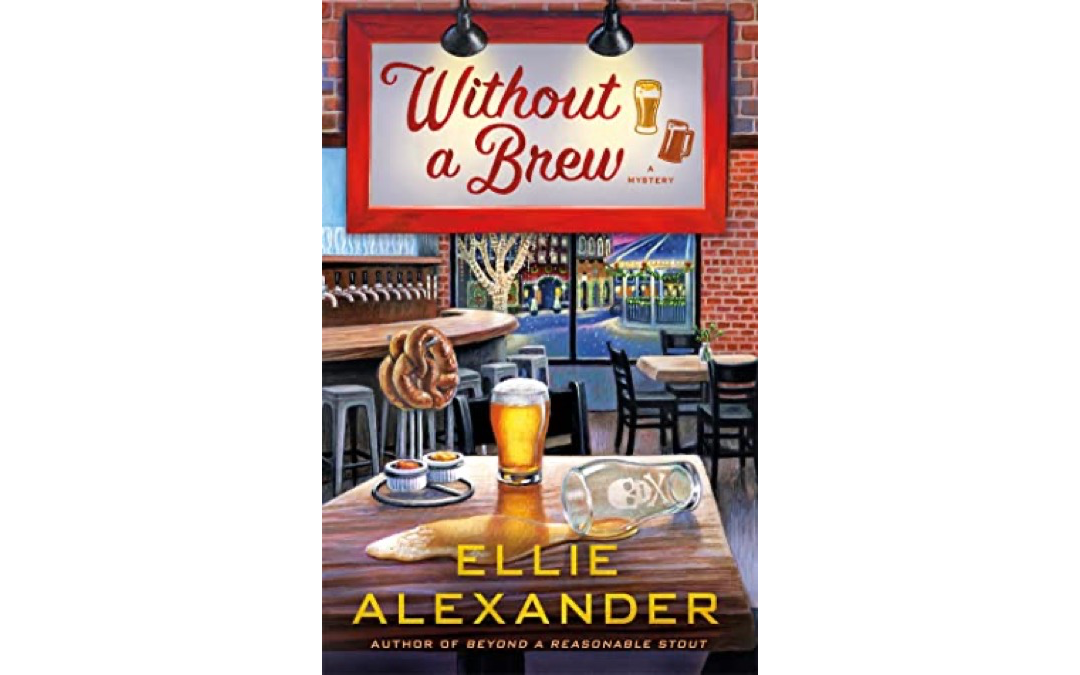 “It’s winter in the Bavarian village of Leavenworth, Washington, which for local brewmaster Sloan Krause means lots of layers, pine and citrus-flavored craft beers, and getting the new guest rooms at Nitro into pristine condition before visitors flood in for IceFest—a local tradition filled with fireworks, ice carving, and winter games of all varieties. But Sloan and her boss Garrett quickly learn that being brewkeepers turned innkeepers may not be as idyllic as it sounded.

While one couple staying with them seems completely smitten, a flashy group arrives in the evening demanding rooms. Sloan and Garrett are less than impressed, but agree to rent to them anyway. The night takes a turn when brewery patron Liv Paxton finishes her frothy pint and, with no previous plan for an overnight stay in Leavenworth, eagerly takes Sloan up on the offer of sanctuary from the snow—until she has a strange run in with some locals and the other guests. Sloan could be imagining things, but when Liv’s room is found trashed the next morning, a hateful message painted on her car, and Liv herself is nowhere to be found, Sloan is convinced another mystery is brewing. With many of the potential suspects hunkering down under Nitro’s roof, she knows her co-workers and friends won’t be safe until she serves up the killer a hoppy pint of justice.” – Amazon

I really, really enjoy the Sloan Krause Mysteries. While a lot of cozies I come back for the characters and community (which I do enjoy in this series too) Ellie Alexander’s descriptions of the town, weather, interior design, and Bavarian culture is really phenomenal. In a lot of cozies, if I’ve read any of the other books in the series, I find it easy to skim through the descriptions since a lot of authors focus more on their characters and plot, but Alexander’s details are so beautiful and interesting that I never skim her books. But that’s not to say that she doesn’t write well developed characters and a good plot, because she’s a master at that too.

In the previous book, Beyond a Reasonable Stout, we are left with some unanswered questions about Sloan’s in-laws. And while we get more answers in this book, it’s not touched on a lot (besides Sloan worrying about what to do) and we are still left with questions that hopefully we’ll find the answers to in book five. In Without a Brew we get to see what Garrett, Sloan, and Kat have done with the rooms to stay in above the brewery since they are doing a soft launch before the upcoming festival (which I’m thinking will happen in the next book). But what starts out with having one couple staying, ends with three couples and a single woman staying, and this leads to murder!

Alexander does a great job with all the different plot lines and advancing Sloan’s character. There are some red herrings and a climactic ending with Sloan and the killer with the perfect amount of tension in the scene.
While I recommend a lot of cozy series, the Sloan Krause Mysteries is one series of about a dozen cozy series that are on my pre-order list because I enjoy it so much.